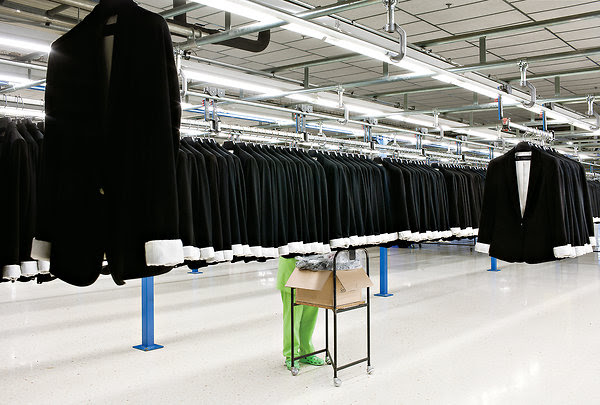 The timescale is now down to weeks, not seasons. See also Pronto moda and Globalization and high fashion (from 2005!).


NYTimes: ... The Zara headquarters is a huge airplane-hangar-size open space, with regional sales managers sitting at a line of desks running down the middle, designers on either side of them. The managers field calls from China or Chile to learn what’s selling, then they meet with the designers and decide whether there’s a trend. In this way, Inditex takes the fashion pulse of the world. “The manager will say, ‘My customers are asking for red trousers,’ and if it’s the same demand in Istanbul, New York and Tokyo, that means it’s a global trend, so they know to produce more red pants,” the P.R. person said.

I remarked that it must be interesting to see what is fashionable in Turkey but not in New York and vice versa. I imagined that different nationalities still had different tastes, at least in terms of fashion. But I was wrong.

“Actually, the customer is more or less the same in New York and Istanbul,” she said. “There are differences, like Brazilian girls like more brilliant colors, whereas in Paris they use more black. But in general when you find a fashion trend, it’s global.”

Earlier, Echevarría told me that neighborhoods share trends more than countries do. For example, the store on Fifth Avenue in Midtown New York “is more similar to the store in Ginza, Tokyo, which is an elegant area that’s also touristic,” he said. “And SoHo is closer to Shibuya, which is very trendy and young. Brooklyn now is a wildly trendy place to go, while Midtown — well, no New Yorker is actually shopping on Fifth Avenue now.” The buyers there are suburban tourists, he meant.

I recalled how I returned to my hipsterish Istanbul neighborhood after a trip to Brooklyn not long ago and discovered that the Turks were all also wearing those huge scarves wrapped around their necks eight times. I was surprised by how fast a style traveled across the globe, because I don’t see many Turks reading fashion magazines. But it isn’t just magazines that tell us what to wear. People like Ortega do. Or, more accurate, we tell each other, through the conduit of his Inditex stores and others like them.

... A trend can last a half a year, but some are finished in a month. “They thought that animal prints would finish by summer, but it kept going,” she said. “In the beginning of this season we had fluorescent colors. It was a trend in April and May, and it was very successful and then that was it.”