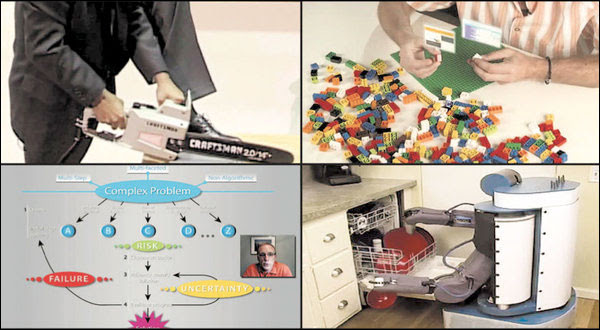 I predicted in my earlier post Whither higher education? that the main beneficiaries of MOOCs would be people who are well above average in intelligence and/or drive to learn.


NYTimes: Year of the MOOC

... Some students are also ill prepared for the university-level work. And few stick with it. “Signing up for a class is a lightweight process,” says Dr. Ng. It might take just five minutes, assuming you spend two devising a stylish user name. Only 46,000 attempted the first assignment in Dr. Ng’s course on machine learning last fall. In the end, he says, 13,000 completed the class and earned a certificate — from him, not Stanford.

That’s still a lot of students. The shimmery hope is that free courses can bring the best education in the world to the most remote corners of the planet, help people in their careers, and expand intellectual and personal networks. Three-quarters of those who took Dr. Patterson’s “Software as a Service” last winter on Coursera (it’s now on edX) were from outside the United States, though the opposite was true of a course on circuits and electronics piloted last spring by Dr. Agarwal. But both attracted highly educated students and both reported that over 70 percent had degrees (more than a third had graduate degrees). And in a vote of confidence in the form, students in both overwhelmingly endorsed the quality of the course: 63 percent who completed Dr. Agarwal’s course as well as a similar one on campus found the MOOC better; 36 percent found it comparable; 1 percent, worse.

Ray Schroeder, director of the Center for Online Learning, Research and Service at the University of Illinois, Springfield, says three things matter most in online learning: quality of material covered, engagement of the teacher and interaction among students. The first doesn’t seem to be an issue — most professors come from elite campuses, and so far most MOOCs are in technical subjects like computer science and math, with straightforward content. But providing instructor connection and feedback, including student interactions, is trickier. ...

From Whither higher education?


1. Internet technology can enhance learning. However, I think the largest impact will be on cognitively gifted or very motivated individuals who will be able to accelerate their education (see, e.g., Khan Academy). For average students, the main barriers to learning have to do with self-motivation and I am not sure that streaming video of lectures, or even a virtual classroom environment which allows rich interaction, will provide better stimulus than the traditional lecture. It seems to me that my intro students have trouble paying attention even when I am literally dancing around at the front of the class, telling jokes and working through elaborate physics demonstrations (which often include explosions or bouncing balls or colorful animations). Moving the lectures online will be cheaper, but not necessarily better -- a win for efficiency, perhaps, but no solution for the difficulty that the average individual has in mastering challenging material.

Ask yourself what the ideal learning environment would be for your child if cost were no object. I think it might be the Oxbridge tutorial system, where a real expert devotes their full attention to training a small number of students (perhaps even a single individual) in great depth. Almost as good would be training in an environment where the student to faculty ratio is low, and the faculty are very focused on pedagogy. Interactions with peers of similar (or superior) ability are as important as those with the tutor/instructor. This ideal limit is quite far from the online systems currently envisaged. Is America too poor to provide this old-fashioned but superior education to (say) the top 10 percent of students? I doubt it.

At the highest quality levels, educational productivity has increased little in the last 100 years. We might improve things around the edges by, say, having lectures from the top scholars available online, along with tools enabling students from different universities to exchange ideas and answer each other's questions. But I don't think we'll see substantive productivity improvement here until we -- gulp -- solve the AI problem and create robot genius professors. Only a small number of students could crowd around Feynman at Caltech's Physics X to hear him explain the EPR paradox. I don't expect that to change anytime soon. (You can record Feynman's comments about EPR; you can't allow thousands of students around the world to interact with him one on one.)


2. Credentialing is complex and even the system we have had in place for several generations is not well understood either by students or by employers. What are the key factors that employers need to determine about an applicant? Intelligence (reasonably well measured by simple tests; but even this is not widely acknowledged in broader society), Conscientiousness (difficult to measure without actually putting someone through a challenging program over a period of years), Ambition/Drive (similar to Conscientiousness), and finally: Creativity, Adaptability and Interpersonal Skills -- all extremely difficult to measure.

I am not sure that Internet technologies will really improve our credentialing capabilities. We already have testing centers, GRE subject exams, Actuarial exams, narrow skill certifications like Microsoft MCSE, etc. It's more a matter of cultural attitudes than anything else -- when will employers start accepting a high SAT score and some narrow skill certification in place of, say, an engineering degree from a well-known university? Has anyone done systematic research on the relative validities (predictive power) of different kinds of certification for a wide variety of employment settings? I only know of results for general cognitive ability (g).

"...when will employers start accepting a high SAT score and some narrow
skill certification in place of, say, an engineering degree from a
well-known university?"

There is a huge opportunity for arbitrage here. Many firms just use a candidate's undergraduate institution as a proxy for that candidate's ability. If a firm came up with an efficient way to recruit high-g kids who went to lower ranked schools, they could offer those students lower salaries but still get approximately the same quality as those firms could get at Ivy League schools.

I think you are absolutely right about "the main beneficiaries of MOOCs would be people who are well above average in intelligence and/or drive to learn." I don't see this as a bad thing necessarily, just a cautionary statement that MOOCs are not going to cure all the ills of education. I think getting above average people who otherwise might be overlooked onto the radar of universities is potentially their most valuable contribution. Here is a quote from Stanford professor Keith Devlin in a forum post in his Introduction to Mathematical Thinking MOOC:

"For sure, what got my interest, was the sheer scale of the new MOOCs. With student enrollments in the many tens of thousands, two goals become attainable:

1. Everyone gets something valuable from the course (at no financial cost); and

2. A small number of highly gifted individuals in the world, with no traditional access to higher education, show up on the radar, and in a short time find themselves flown over to Palo Alto to be interviewed for a free scholarship at Stanford.

Goal 2 boils down to making traditional elitist education available to the most talented people in the world, regardless of their socio-ecomonic status. As a person from a decidedly non-elitist background who ended up at Stanford, both goals ring all my bells.

For those interested in MOOCs I have found his blog a good read: http://mooctalk.org/

I'll tell you my personal experience. I'm a student of theoretical physics in Croatia, I have a year till I get a master degree. I've found about Coursera 2 months ago and passed 2 subjects, I intend to get 6-10 more in the following year.

The potential benefits are huge, I don't think that someone will give me job based on Coursera courses I completed, however, my skill set will be drastically improved, I can select very specific courses that interest me, that I could never take on my own university. I will feel confident to apply to much broader set of jobs, also I can refresh my knowledge where I got rusty over the years.

I think that cumulative effect will be huge, you will see people with much wider set of skills. I also think that the biggest beneficiaries will be bright people that are not top in the class as this population is often demotivated by classical university experience ("For average students, the main barriers to learning have to do with self-motivation and I am not sure that streaming video of lectures" - this is a part of a problem, totally wrong diagnostics - it's not easy to be self motivated when you get lost after couple of minutes of lectures, on videos you can repeat the important concepts as many times as you like).

> it's not easy to be self motivated when you get lost after couple of minutes of lectures, on videos you can repeat the important concepts as many times as you like<

Interesting observation! But it is clear you are above average in motivation.

It's not questionable that you need to have above average motivation to self study. The problem lies in people that do have motivation but get left behind for some reason, they get put into a same basket as people without motivation.

I can't however claim this for American universities, but in my country I've seen lot of very bright talented people quit for the wrong reasons.

Here is my simplified model. Let's assume that A+ students are 3sd above average, and they do everything great, they are motivated, understand everything immediately, they get best jobs etc. But what about people with 1-2sd above average? By definition there are far more people with 1sd and 2sd, and in my observation, at least in my country, this is the mostly neglected part of population. There lies a huge potential. The goal doesn't have to be to "produce more Einsteins", let's produce lot more of a level below guys, there lies the huge intellectual and economic potential. Also, just by large numbers you can expect that there might be Einsteins that easily get overlooked by current radar, perhaps MOOC model can more successfully pickup guys lost in the crowd.