Quantum fluctuations in de Sitter space with a domain wall

New paper! Probably of interest only to experts ...

We study the gravitational effects of a planar domain wall on quantum fluctuations of a massless scalar field during inflation. By obtaining an exact solution of the scalar field equation in de Sitter space, we show that the gravitational effects of the domain wall break the rotational invariance of the primordial power spectrum without affecting the translational invariance. The strength of rotational violation is determined by one dimensionless parameter beta, which is a function of two physical parameters, the domain wall surface tension sigma and cosmological constant Lambda. In the limit of small beta, the leading effect of rotational violation of the primordial power spectrum is scale-invariant.

Some general comments. In inflationary cosmology the large scale structure of the universe arises from quantum fluctuations of the inflaton field. The hot regions in this map of the universe tend to evolve into galaxies and stars. But the locations of the hot and cold regions are determined by quantum mechanics. 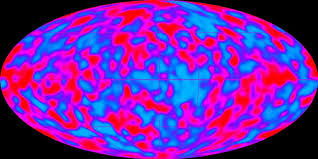 The existence of the Earth, our sun, and our galaxy -- instead of a starless void -- is the consequence of a random quantum outcome. This is a problem for interpretations of quantum mechanics that insist on classical observers: in modern cosmology the observers cannot escape description in the overall wavefunction of the universe.
Posted by Steve Hsu at 11:25 PM

I really like your posts. I study and memorize them and use your posts as discussion points in all my classes from math to physics. I probably learn more here than I do in school!

Wow, that's quite a compliment! Thanks :-)