More on SES and IQ

A collaborator pointed out this nice figure (from the paper below), which is pretty self-explanatory, but let me emphasize the fairly wide SES (socioeconomic status) range of families under consideration. If SES were determined solely by household income the four categories in the graph would range from below $20k to above $100k per annum (2003 US income data).

Note to Tiger Moms and Sociologists: Shared genes make people more alike, but shared family environment does not (very much). Feel free to disregard, though. Who needs data when you have an opinion? :-) 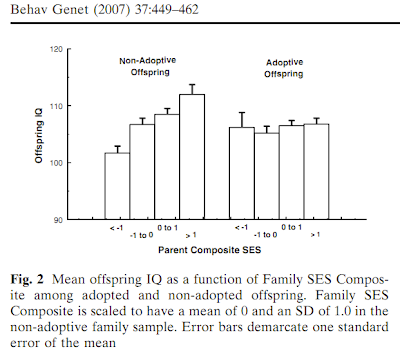 Average age at adoption was 4.7 months. I don't know why the IQ means are all above average. (See comments; the researchers might have used an old norming of the WISC/WAIS.) The study was done in Minnesota: the adopted children were 67% Asian (avg 107.7) and 20% Caucasian (avg 105.2) while the families were 95% Caucasian.

The Environments of Adopted and Non-adopted Youth: Evidence on Range Restriction From the Sibling Interaction and Behavior Study (SIBS)

Abstract: Previous reviews of the literature have suggested that shared environmental effects may be underestimated in adoption studies because adopted individuals are exposed to a restricted range of family environments. A sample of 409 adoptive and 208 nonadoptive families from the Sibling Interaction and Behavior Study (SIBS) was used to identify the environmental dimensions on which adoptive families show greatest restriction and to determine the effect of this restriction on estimates of the adoptive sibling correlation. Relative to non-adoptive families, adoptive families experienced a 41% reduction of variance in parent disinhibitory psychopathology and an 18% reduction of variance in socioeconomic status (SES). There was limited evidence for range restriction in exposure to bad peer models, parent depression, or family climate. However, restriction in range in parent disinhibitory psychopathology and family SES had no effect on adoptive-sibling correlations for delinquency, drug use, and IQ. These data support the use of adoption studies to obtain direct estimates of the importance of shared environmental effects on psychological development.

"the adopted children were 67% Asian and 20% Caucasian"

Is that representative? Are 67% of adopted children Asian?

"I don't know why the IQ means are all above average."

It's Minnesota and also adopting parents may have higher IQs even controlling for SES.

"18% reduction of variance in socioeconomic status"

Really? That can't be representative of adoptive homes in general.

But an anecdote IIRC Tony Blair's father was adopted by "working class" Scots but was the son of "middle class" English actors. He became a law professor.

"I don't know why the IQ means are all above average."
I would guess it's because of the Flynn effect. They used the WISC-R and the WAIS-R, which were released in 1974 and 1981, respectively, whereas the adoptees' IQs were measured in 1999 or later. IQ norms get old pretty quick.

"I don't know why the IQ means are all above average."

Lake Wobegon is in Minnesota....

What is "disinhibitory psychopathology"?

Felix Perez asks:
"The Flynn effect is an interesting concept because it seemed IQ gains were nearly universal throughout the world. But were they real gains or just errors?"

A much stronger dose of skepticism is required than either
Flynn or Nisbett have demonstrated in regard to the power of
educational interventions. As Jensen (1969) pointed out long
ago, when it comes to what can be done to increase IQ and
school achievement scores, sadly, the answer is still “not much.”

The rise and fall of the Flynn Effect as a reason to expect a narrowing of the
Black–White IQ gap
J. Philippe Rushton and Arthur R. Jensen

For the study, select http://www.reddit.com/search?q=IQ+height+flynn

Why did the SIBS study have different results than the multiple French adoption studies which show a big SES effect?  OR Turkheimers work?

The IQs are above average because different demographics have different approaches to adoption.  In a middle class sample, the adoptions will tend to be things like a 16 year-old daughter making a mistake.  In a poorer population it will often be a foster family situation where the parents are deemed a danger to the kid.  So you'll get different samples depending on which demographics you look at.

I'm not familiar with the French studies, but Turkheimer is sometime criticized for using IQ scores of fairly young subjects. No one knows whether his reduction of heritability persists into adulthood. In this study the measurements were done in adolescence or later. Also I believe Turkheimer's sample included cases of more severe deprivation than would be found in this study. The effect may be nonlinear in the extremes: Tiger Moms at the far + tail and severe deprivation at the other extreme might lead to big effects. But in the less extreme regions of shared family environment I would say the evidence supports only weak effects at most.

The study you linked to addresses a somewhat different question. These kids were initially very deprived and had low measured IQs when adopted at age 4-6 -- probably more like the group that Turkheimer studied.

"They had all been (i) neglected and/or abused during infancy, having been definitively removed from their biological family by court order after judicial procedures; (ii) placed in many foster families and/or institutions before adoptive placement; and (iii) assessed by a psychometric test that provided an IQ < 86 and > 60 in the year preceding adoptive placement."

Because the initial IQs were tested so early the gain in IQ is a pretty noisy observable. The main result is that the gain was 13 points larger if the kid was adopted into a high SES family than a low SES family. Sample size here is kind of small, like 20 kids in the low/high SES groups. Taking the study at face value I would say it's evidence that recovery after early deprivation is possible but that it takes resources.

One complication is that, more than in most other fields, you have to worry about a certain fraction of these studies being downright fraudulent, as opposed to merely wrong or statistically insignificant.   Obviously you can't just assume that any study with a result you dislike is made up, but then again,  looking at the track record, a certain fraction  _were_ made up.

Publication bias would seem a bigger problem than downright fraud.  Like, if someone finds that adoption doesn't raise IQs, they might not want to publish that result.

"...you have to worry about a certain fraction of these studies being downright fraudulent..."

And you have to worry about studies on both sides. The motivation may be professional more than political though. Lots of citations when a study says what you want it to say whatever that is!

***Like, if someone finds that adoption doesn't raise IQs, they might not want to publish that result. ***

As Wicherts found was happening with 'stereotype threat' studies.

And in a study cited by Nisbett variance in the environment of adoptive homes was 1/5 that of homes in general.

"So society does a good job of identifying high IQ and rewarding that with high SES."

Actually no Felix. IQ explains 1/6 to 1/4 of the variance in earned income. Low IQ is a much better predictor of poverty than high IQ is of self-made wealth.

BTW Felix, society can't do anything. Society is not an agent.

I've been occasionally considering the implications of differential disease resistance on intelligence. Obviously if a disease is fatal, that person's productivity is lost to society. Separately, though, a variety of illnesses, present in modern societies, including recent H1N1 virus, could exert long-lasting cognitive damage: http://www.ncbi.nlm.nih.gov/pubmed/21234600

(unproven, N=5). So, it might be worth examining the impact of differential immune resistance to disease upon the likelihood of long-term cognitive damage, in the context of possible disease exposures. This hypothesis has also been advanced for schizophrenia, particularly by Yolken at JHU: http://www.ncbi.nlm.nih.gov/pubmed/21632649. This remains an unproven hypothesis at the current time for schizophrenia. It is also sobering to consider that the increases in antibiotic resistant bacteria may bring about a return of previously defeated diseases such as tuberculosis: http://www.ncbi.nlm.nih.gov/pubmed/21127999.

Hear, hear J Lo. There is an assumption on the part of people like Steve that IQ's heritability is a result of certain genes coding directly for better or inferior brains. It does not occur to them that some unnecessary but ubiquitous environmental conditions may favor the intellectual development of some and retard that of others.

Actually I'm making a different point: one of the regions under the strongest selection pressure in the genome is the HLA region. We already know the following: "One of the most striking features of the MHC, in particular in humans, is the astounding allelic diversity found therein, and especially among the nine classical genes. In humans, the most conspicuously-diverse loci, HLA-A, HLA-B, and HLA-DRB1, have roughly 1000, 1600, and 870 known alleles, respectively (IMGT/HLA) — diversity truly exceptional in the human genome." http://en.wikipedia.org/wiki/Major_histocompatibility_complex#MHC_evolution_and_allelic_diversity Accordingly, it is my personal opinion that immune genetics probably evolves faster than brain genetics, but that does not suggest the genes influence intellectual ability of which there are clear examples: Fragile X syndrome: http://en.wikipedia.org/wiki/Fragile_X#Working_memory "From their 40s onward, males with FXS begin developing progressively more severe problems in performing tasks that require the central executive of working memory..

The immune system is almost certainly under stronger selection pressure and evolves faster than the brain. It is competing against tiny organisms that are themselves evolving very fast.

My point is one Steve has yet to grasp. Impossible right? ;)