They got (some) game 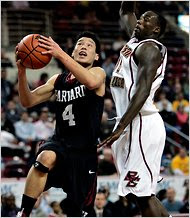 Will Jeremy Lin become the first (full) Asian-American and first Harvard grad to play in the modern NBA?

NYTimes: ... A little-known 6-foot-3 point guard, Lin wowed an N.B.A. summer league crowd by upstaging the league’s No. 1 draft choice. He signed a two-year contract with the Golden State Warriors and is edging toward becoming Harvard’s first N.B.A. player in more than 50 years.

... There was a time when Lin was on the junior varsity that Diepenbrock marveled that a 13-year-old would implore teammates, “There’s a double screen!” There was the state championship game against powerful Mater Dei when, in the waning seconds, Lin dribbled toward a screen, calmly retreated and restarted a play that ended in his clinching layup. There was the state tournament game when his Palo Alto teammates looked listless, so Lin uncharacteristically scored 35 points.

My cousin Richard Chang had a shot at it 20 years ago. A 6 foot 7 forward, he was heavily recruited out of Edison high school in Los Angeles, and played at Cal. If it weren't for a knee injury the summer after a freshman season where he saw a lot of playing time, I think he could have made the NBA. A torn ACL back then was a big deal -- he has a scar the length of his lower leg from the surgery. Richard was cut by the Warriors before the beginning of the season (could still happen to Lin), back in the late 80s. When I was a grad student at Berkeley I overlapped with Richard on campus, and undergraduates were always amazed to learn he was my cousin. "RICHARD CHANG is your cousin?!?" they'd ask. I learned a lot about big time sports culture and the sense of entitlement that athletes have. When I visited him in Huntington Beach the ushers would let us into the local movie theaters for free!

Anyone remember Harvard running back Eion Hu (all-time Harvard rushing leader in 1996)? I think he's a doctor now ;-)
Posted by Steve Hsu at 3:38 AM

*And yet white liberals assume that somehow Asian Americans enjoy a certain degree of privilege in this nation. We've been viciously discriminated against in the past and we continue to be viciously discriminated against even today. Because most of the focus has been shifted towards anti-black and anti-Hispanic discrimination, anti-Asian racism, whether from black, white, or Hispanic Americans has become one of the most pressing and least acknowledged civil rights issues of our modern day era.

The vicious attacks against Asian American students in South Philadelphia high schools at the hands of black students has scarcely received any national attention, nor has the vicious targeting of Asian Americans in San Francisco at the hands of primarily African Americans garnered any kind of widespread attention either. One can only imagine the ensuing national uproar had white Americans selectively targeted African Americans as victims of violent crimes, and rightfully so. Racial bigotry in all of its forms is absolutely barbaric and should be equally condemned. What the reaction to these incidents suggests then is that Asian Americans are often relegated to utter irrelevance by mainstream American society, particularly when it comes to social or political matters. It's almost as if society is saying that Asian Americans don't exist or that somehow their civil liberties don't matter. Anyone with any kind of moral conscience should be absolutely outraged. And on top of the constant anti-Asian racism that American society tolerates, elite American universities have further decided to discriminate against Asian American applicants simply on the basis of their race.

When one takes a moment to contemplate the social realities of American society today, one can't help but become outraged by the vicious treatment that Asian Americans often endure. Where's the justice?

The last time I was in Taiwan, in 2003, I noticed him on the cover of one the local business magazines! (He is the head of Costco Taiwan now.) It's pretty common for ex-jocks to do well in business for a number of reasons: people may already know who you are (if you were famous), you probably have a lot of self-confidence, you probably already know to operate on a team, you probably have internalized that hard work and preparation pay off, you probably have a strong determination to succeed, etc. Former athletes are heavily over-represented among CEOs, Wall Street executives, etc.

Of course the Harvard admissions people figured this out some time ago (although maybe things are a bit different today):

... To test his hypothesis that Harvard's most brilliant students were not its most "distinguished graduates," he [Bender] carried out his own study of exceptionally successful alumni.

The twenty-six men studied were a veritable Who's Who of the American elite: among them was a former secretary of defense, the president of Commonwealth Edison and Electric Bond and Share, the publisher of the Minneapolis Star and Tribune, the senior partner of Davis Polk, and (not least) the general chairman of the Program for Harvard College. Twenty-two were private school graduates, with St. Paul's (four) and Groton (three) leading a list of the nation's most elite boarding schools. These men had not compiled particularly distinguished academic records at Harvard; the majority of them had relatively poor grades. A casual inspection suggested "a much higher than average participation by the above in athletic and other extracurricular activities" precisely the kinds of students likely to be excluded by the Ecole Normale model.

Here's a remarkably harrowing depiction of the kinds of racism that Lin has had to endure. The comments below are remarkably similar to what one would find on Steve Sailer's blog. I wonder how many of Lin's detractors are regular Steve Sailer readers?

"Lin has regularly heard bigoted jeers at games such as "Wonton soup", "Sweet and sour pork", "Open your eyes!", "Go back to China", "Orchestra is on the other side of campus", or Chinese gibberish.[7][28][29] Lin says this occurred even at most if not all Ivy League gyms. He does not react to it. "I expect it, I'm used to it, it is what it is," says Lin.[28] According to teammate Oliver McNally, a fellow Ivy League player once called Lin a "chink".[28]"

And yet white liberals assume that Asian Americans show enjoy a certain degree of privilege in this nation. We've been viciously discriminated against in the past and we continue to be viciously discriminated against even today. Because most of the focus has been shifted towards anti-black and anti-Hispanic discrimination, anti-Asian racism, whether from black, white, or Hispanic Americans has become one of the pressing and least acknowledged civil rights issues of our modern day era.

Now that you and your cousin are both in Taiwan...do you see him to receive any um, special benefits, at Costco? Just asking.

So people who came from (or their parents, or grandparents, or…) East Asia are acceptable targets for racial slurs? That must mean they're white now! Welcome to the club!

My hunch is that the name-calling Lin's been subjected to is fairly normal by college basketball standards, especially if "honky" and "cracker" are par for the course in terms of locker-room trash talk. Similarly, I'd expect a certain level of ambient jerkwaddery by both the fans and the players that isn't finely tuned—for these people, "if I'm off my game, that's because your mother love me looooong time last night" might not register as any worse than "If I'm not playing well, I saw your mother last night, and you've heard what you're not supposed to do the night before a game…".

My own preferences are for strict politeness against people I don't know, the latter insult among friends who know me well enough to know the spirit it's offered in (and in any case, have made similar teases before), and the former insult _never_, as it simply injects a dimension of nastiness I've never personally needed and never want to use.

That said, most, if not all, of what I know of ivy-league basketball mores I learned from _I Am Charlotte Simmons_. If anyone else is more familiar with them, please chime in.