There seem to be a lot of physicists here this year. A partial list of theorists: Adi Stern, Chetan Nayak, Frank Wilczek, David Gross, David Tong, Eva Silverstein, Lee Smolin, Erik Verlinde, Alan Guth, Max Tegmark, Paul Davies, Giovanni Amelino-Camelia. Do I count Ed Lu? He was an astronaut for a long time. Guth, who is a very level-headed guy, told me he's now 99 percent confident that inflation is correct, given the CMB results from the last decade. I think I convinced Chetan and maybe Adi that they are actually many worlders ("... if you do a decoherence calculation, and at the end don't insist on throwing away all the parts of the wavefunction except one of the decoherent parts, then you're a many worlder" ;-) Max claims to have a way to get the Born rule from many worlds, but I don't believe him :-) Guth is a many worlder.

I could easily spend all my time at the physics talks, but I think it's better use of this kind of meeting to attend talks outside my specialty. At dinner I met a guy who does fMRI on psychopaths and the guy who built a wind-powered car that goes faster than the wind. 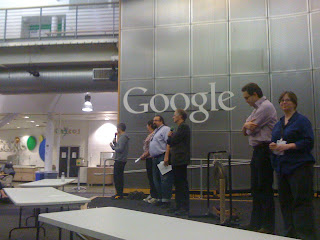 The campers introducing themselves. 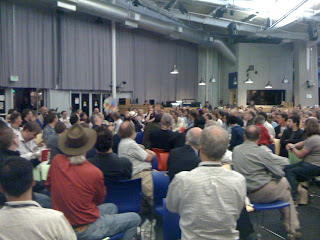 Goofing around with a super croc fossil. 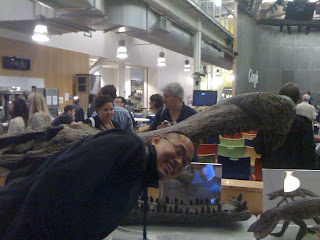 Two Caltechers of my vintage: Tsutomu Shimomura and Ed Felton. We talked about the huge cognitive surplus in physics -- both of these guys were trained in physics before going on to other things. 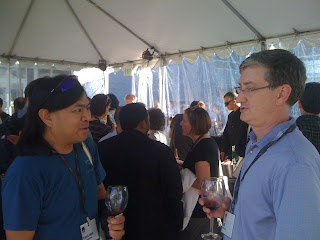 Better have a way to get the Born rule, or what's the point?