Sorry for the lack of posts. I am traveling in Canada at the moment. Here's a photo from Mount Tremblant (near Montreal): 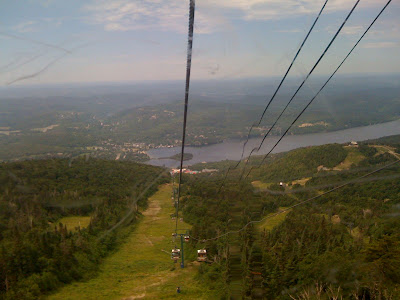 This essay by Andy Grove was recommended by commenter LondonYoung, and I thought I'd post an excerpt here. (LY, greetings from 4 techers!)

Bloomberg: Recently an acquaintance at the next table in a Palo Alto, California, restaurant introduced me to his companions: three young venture capitalists from China. They explained, with visible excitement, that they were touring promising companies in Silicon Valley. I’ve lived in the Valley a long time, and usually when I see how the region has become such a draw for global investments, I feel a little proud.

Not this time. I left the restaurant unsettled. Something didn’t add up. Bay Area unemployment is even higher than the 9.7 percent national average. Clearly, the great Silicon Valley innovation machine hasn’t been creating many jobs of late -- unless you are counting Asia, where American technology companies have been adding jobs like mad for years.

The underlying problem isn’t simply lower Asian costs. It’s our own misplaced faith in the power of startups to create U.S. jobs. Americans love the idea of the guys in the garage inventing something that changes the world. New York Times columnist Thomas L. Friedman recently encapsulated this view in a piece called “Start-Ups, Not Bailouts.” His argument: Let tired old companies that do commodity manufacturing die if they have to. If Washington really wants to create jobs, he wrote, it should back startups.

Friedman is wrong. Startups are a wonderful thing, but they cannot by themselves increase tech employment. Equally important is what comes after that mythical moment of creation in the garage, as technology goes from prototype to mass production. This is the phase where companies scale up. They work out design details, figure out how to make things affordably, build factories, and hire people by the thousands. Scaling is hard work but necessary to make innovation matter.

The scaling process is no longer happening in the U.S. And as long as that’s the case, plowing capital into young companies that build their factories elsewhere will continue to yield a bad return in terms of American jobs.

Scaling used to work well in Silicon Valley. Entrepreneurs came up with an invention. Investors gave them money to build their business. If the founders and their investors were lucky, the company grew and had an initial public offering, which brought in money that financed further growth.

Today, manufacturing employment in the U.S. computer industry is about 166,000 -- lower than it was before the first personal computer, the MITS Altair 2800, was assembled in 1975. Meanwhile, a very effective computer-manufacturing industry has emerged in Asia, employing about 1.5 million workers -- factory employees, engineers and managers.

The largest of these companies is Hon Hai Precision Industry Co., also known as Foxconn. The company has grown at an astounding rate, first in Taiwan and later in China. Its revenue last year was $62 billion, larger than Apple Inc., Microsoft Corp., Dell Inc. or Intel. Foxconn employs more than 800,000 people, more than the combined worldwide head count of Apple, Dell, Microsoft, Hewlett-Packard Co., Intel and Sony Corp.

Until a recent spate of suicides at Foxconn’s giant factory complex in Shenzhen, China, few Americans had heard of the company. But most know the products it makes: computers for Dell and HP, Nokia Oyj cell phones, Microsoft Xbox 360 consoles, Intel motherboards, and countless other familiar gadgets. Some 250,000 Foxconn employees in southern China produce Apple’s products. Apple, meanwhile, has about 25,000 employees in the U.S. -- that means for every Apple worker in the U.S. there are 10 people in China working on iMacs, iPods and iPhones. The same roughly 10-to-1 relationship holds for Dell, disk-drive maker Seagate Technology, and other U.S. tech companies.

You could say, as many do, that shipping jobs overseas is no big deal because the high-value work -- and much of the profits -- remain in the U.S. That may well be so. But what kind of a society are we going to have if it consists of highly paid people doing high-value-added work -- and masses of unemployed?

Since the early days of Silicon Valley, the money invested in companies has increased dramatically, only to produce fewer jobs. Simply put, the U.S. has become wildly inefficient at creating American tech jobs. We may be less aware of this growing inefficiency, however, because our history of creating jobs over the past few decades has been spectacular -- masking our greater and greater spending to create each position.

Should we wait and not act on the basis of early indicators? I think that would be a tragic mistake because the only chance we have to reverse the deterioration is if we act early and decisively.

Already the decline has been marked. It may be measured by way of a simple calculation: an estimate of the employment cost- effectiveness of a company. First, take the initial investment plus the investment during a company’s IPO. Then divide that by the number of employees working in that company 10 years later. For Intel, this worked out to be about $650 per job -- $3,600 adjusted for inflation. National Semiconductor Corp., another chip company, was even more efficient at $2,000 per job.

Making the same calculations for a number of Silicon Valley companies shows that the cost of creating U.S. jobs grew from a few thousand dollars per position in the early years to $100,000 today. The obvious reason: Companies simply hire fewer employees as more work is done by outside contractors, usually in Asia.

The job-machine breakdown isn’t just in computers. Consider alternative energy, an emerging industry where there is plenty of innovation. Photovoltaics, for example, are a U.S. invention. Their use in home-energy applications was also pioneered by the U.S.

Last year, I decided to do my bit for energy conservation and set out to equip my house with solar power. My wife and I talked with four local solar firms. As part of our due diligence, I checked where they get their photovoltaic panels -- the key part of the system. All the panels they use come from China. A Silicon Valley company sells equipment used to manufacture photo-active films. They ship close to 10 times more machines to China than to manufacturers in the U.S., and this gap is growing. Not surprisingly, U.S. employment in the making of photovoltaic films and panels is perhaps 10,000 -- just a few percent of estimated worldwide employment.

There’s more at stake than exported jobs. With some technologies, both scaling and innovation take place overseas. Such is the case with advanced batteries. It has taken years and many false starts, but finally we are about to witness mass- produced electric cars and trucks. They all rely on lithium-ion batteries. What microprocessors are to computing, batteries are to electric vehicles. Unlike with microprocessors, the U.S. share of lithium-ion battery production is tiny.

That’s a problem. A new industry needs an effective ecosystem in which technology knowhow accumulates, experience builds on experience, and close relationships develop between supplier and customer. The U.S. lost its lead in batteries 30 years ago when it stopped making consumer-electronics devices. Whoever made batteries then gained the exposure and relationships needed to learn to supply batteries for the more demanding laptop PC market, and after that, for the even more demanding automobile market. U.S. companies didn’t participate in the first phase and consequently weren’t in the running for all that followed. I doubt they will ever catch up. ...

Comments on this essay from Tyler Cowen (via Dave Backus). Groves' conclusions may be suspect, but the facts he describes are nevertheless very interesting.
Posted by Steve Hsu at 10:24 PM

A bit strange that Grove would lament about a trend that is a serious problem only when viewed from a narrow US perspective, urge immediate action, and yet offer no remedies. What is he suggesting? A return to the most efficient mode of job creation, subsistence farming? Well, that may actually be necessary in the long run, as mechanization, improving productivity, and increase in automation gradually raise the "cognitive threshold" for employment, making an ever increasing percentage of the populace unemployable in an urban setting. Governments will have to pick them up and resettle them in agrarian reserves.

Grove is right. Some short comments on some of the points listed by that Koch family tool Cowen (The Koch family has many tools BTW).

2. Only he who first shows he understands comparative advantage has license to partially reject it.

Jesus H. Christ! Is this all econotools have to back up their push to fuck the majority of people in the US? I think Grove is smart enough to understand CA. It's simply not that difficult. Coming up with it in the first place was a stroke of genius and it has its explicative uses but it's not some fucking super complicated text that we must follow as if it were gospel. Get over it professors. Start living in the world as it is. Read some Ha-Joon Chang and get over this childish view that what you all call free-trade is the will of G-d and that CA is holy writ!

4. He doesn't once mention that we might get useful ideas from China and other countries, or that their prosperity is good for America.

Hey Cowen, ya' forgot to preface this brain turd with something akin to "All things being equal". Changes the meaning a bit don't it? To the point of saying something like 'people having more stuff is good'. Well, duuuuuuh!

5. I would like him to state how Asians enter into his social welfare function.

And I would like him to state how Laplanders enter into his social welfare function. But Grove is mainly concerned about the US and Americans here.

7. Is he assuming that the whole world works like his sector -- semiconductors -- does?

8. An innovation shortfall may well be a serious problem today, as every reader of Michael Mandel should know. But what are Grove's solutions? The government tries to pick winners, on a massive scale with public funds, and we start a big trade war against China? The evidence for these proposals is one citation to Robert Wade. Sorry, I'm not convinced. I heard that in the 1980s except China was Japan. We ignored that advice in the 80s and in the 90s the job market was fine. Grove is writing from a time warp in which these debates never happened or never were settled or never something -- I don't know what.

No, we let the money men of Wall Street pick the winners and losers. That'll be nice and undemocratic. Just like you and all your wealth worshiping ilk like it.

This is the right time for graduates who completed their graduation and looking for job.Almost all companies are starts recruiting the efficient persons.So,Graduates get ready for getting the right job. There are so many jobs in mumbai for all graduates in both IT/non-IT side. This is very useful to you,utilize it.