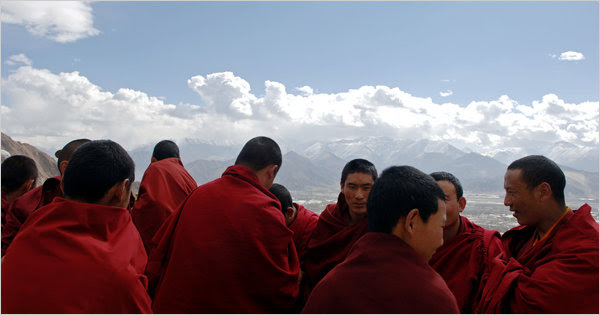 NYTimes: ... Scientists from the Beijing Genomics Institute last month discovered another striking instance of human genetic change. Among Tibetans, they found, a set of genes evolved to cope with low oxygen levels as recently as 3,000 years ago. This, if confirmed, would be the most recent known instance of human evolution.

[I believe the common Tibetan variant is found in about 8% of Han Chinese, so it isn't necessarily that a new mutation swept the Tibetan population during the 3k years. Rather, modern Tibetans are likely to be descended from the people who were well adapted to living at high altitude. As in the case of height (below), extant variation can be acted on by selection faster than new mutations are likely to appear. Most people who don't believe in rapid human evolution don't understand that new mutations are not required. All that is required is a redistribution of allele frequencies. See here for more on the Tibetan results.]

Many have assumed that humans ceased to evolve in the distant past, perhaps when people first learned to protect themselves against cold, famine and other harsh agents of natural selection. But in the last few years, biologists peering into the human genome sequences now available from around the world have found increasing evidence of natural selection at work in the last few thousand years, leading many to assume that human evolution is still in progress.

“I don’t think there is any reason to suppose that the rate has slowed down or decreased,” says Mark Stoneking, a population geneticist at the Max Planck Institute for Evolutionary Anthropology in Leipzig, Germany.

... Soft sweeps work on traits affected by many genes, like height. Suppose there are a hundred genes that affect height (about 50 are known already, and many more remain to be found). Each gene exists in a version that enhances height and a version that does not. The average person might inherit the height-enhancing version of 50 of these genes, say, and be of average height as a result.

Suppose this population migrates to a region, like the Upper Nile, where it is an advantage to be very tall. Natural selection need only make the height-enhancing versions of these 100 genes just a little more common in the population, and now the average person will be likely to inherit 55 of them, say, instead of 50, and be taller as a result. Since the height-enhancing versions of the genes already exist, natural selection can go to work right away and the population can adapt quickly to its new home.

In the case of height, no individual gene variant has yet been found which accounts for more than a fraction of a percent of total variance. But, it's possible that half or more of total variance is captured by the 300k SNPs used in recent GWAS studies.

It's very plausible that IQ is like height -- a large number of genes, each of small effect, control most of the variance. I've done some rough calculations, and it seems that the proposed BGI study (which will genotype both an ordinary and an extreme group) has a good chance of detecting a large number of those genes -- stay tuned.

See related post: Recent evolution in humans.
Posted by Steve Hsu at 12:08 AM

"It's very plausible that IQ is like height -- a large number of genes, each of small effect, controls most of the variance."

That is most of the variance within a defined environment.

"I've done some rough calculations, and it seems that the proposed BGI study (which will genotype both an ordinary and an extreme group) has a good chance of detecting a large number of those genes"

Those genes which affect IQ in Chinese living in China.

A study which compared ordinary rural Chinese to high IQ Norwegians living in Trondheim would be less likely to come up with anything.

You might also explain to your readers that a trait may be very heritable in the most diverse environments yet no individual genes affect it.

You might also explain to your readers that a trait may be very heritable in the most diverse environments yet no individual genes affect it.

Didn't Plomin have a larger sample size using SNP-chips? As I recall, that failed to replicate.

I think the extreme group design has more power than the one used by Plomin. In the study described below Plomin had 7k kids, more or less randomly selected. The BGI study, if done correctly, could have, e.g., 2k at > +3 SD and another random group of similar size. Out of Plomin's sample there were probably no more than a dozen or two at +3 SD (depends on the mean in his group). Also, IQ tests administered at age 7 (Plomin's group) are noisy measures of g. In the BGI study they could easily find a bunch of Beida or Tsinghua students with really high gaokao scores who average +3 SD.

Having a big pool of outliers helps your statistical power a lot, if I am not mistaken. After all, you are basically looking for differences in allele distributions.

Yes Jin, your points are all correct. (Although your caveat that the genes might be specific only to Chinese living in China is way too pessimistic, I think. Do you imagine the same for height?) But do I have to preface every post with a pedagogical review of "heritability" and all that?

Despite your comments I am sure you will be quite interested in the results of the study.

There are different skin color-affecting genetic variants in Asia and Europe. That's probably easier for skin color than intelligence, since the skin color variants are few and strongly positively selected (small numbers leave more room for luck to get a variant established in one region and not another), but plausible. Also, you may get population stratification trouble (variants indicating ancestry in rich regions that are better able to demonstrate their talent and send kids to elite universities).

Any idea when the study will take place, and how soon the results will be available? It would be neat to solicit betting odds from folk on the results.

I don't know, but I will be visiting BGI in the fall, so I hope to learn more.

I wrote a 2 part article on the next step in human evolution. It may be of interest to you and your readers: http://www.noisepollution.nl/?p=2193

What has happened with the studies begun on people with "affective disorders" over 20 years ago at the Stanley Institute? At a convention of the Depression and Bipolar Alliance in Houston geneticists announced a theory that our species was loading its gene pool with neurological anomalies like those found in people with various "affective disorders" (chemical addictions, depression, mania, psycho-affective disorders, etc.). In their studies they found that men and women who both had increased affective sensitivity were coupling, producing a statistically significant increase of potential neurological differences in their progeny. Because I am one of the subjects of that study I have been curious about our progress in discovering the relationship between genetic clusters inherited by people with such "sensitivities." The early indications were that our species was in the process of increasing our ability to co-create and problem solve. As with many evolutionary changes there may be a detriment to the genetic shift until the species' behaviors resulting from the genetic change is stabilized throughout the population. Some theories about this aspect of human evolution consider such incidences evident in "indigo children", "shaman" individuals, and humans with a measured higher than typical psychic profile. I realize that this subject has not been well investigated by 21st century science because of the difficulties isolating nature versus nurture variables.