Phelps, shmelps -- Bolt is the man 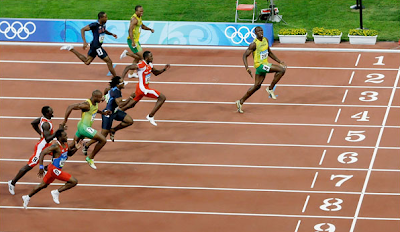 9.69 -- and he strolled across the finish line while beating his chest with no one even close! Bolt is 6 foot 5 and only 21 years old. I think Michael Johnson's record in the 200m is in jeopardy. Bolt is probably the greatest of all time, assuming he's clean.

NBC: ...With a full seven strides to go, he dropped his arms and let them fall outstretched to his sides, appearing almost to run sideways as he played to the sold-out crowd of 91,000 at the Bird's Nest. Just before the finish line, he started high-stepping and, for good measure, executed a chest-thump.

All that, and still -- 9.69 seconds. Bolt simply ran away from the rest of the best of the world.


BBC: ...Michael Johnson described [it] as "the greatest 100m performance in the history of the event".

Johnson, a multiple Olympic champion who still holds the 200m and 400m world records, told BBC Sport: "He shut down with 10m to go. We have never seen anything like it before.

"It's absolutely amazing. Asafa Powell and Tyson Gay cannot run with him. He is a show unto himself."

Remember what I said about Jamaican track a month ago during the Olympic trials... 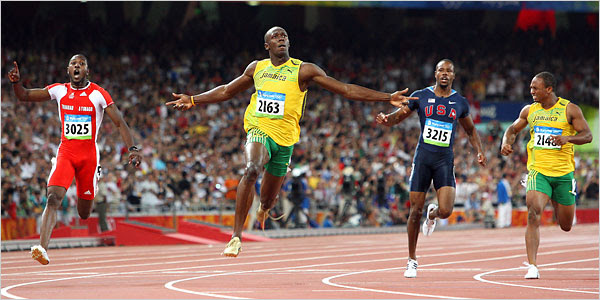 I was a competitive swimmer from age 7 through college. My high school team won a state title my junior year and conference titles all four years I was on the team. We had numerous All-Americans and state champions. I'm still ranked (barely) on the all-time list. But the best athlete I ever competed against was a running back who had been an LA sprint champion and had turned down Division I football scholarships to attend Caltech (he was 6 foot 2 and around 190-200). I could not lay a hand on him in the open field and he was incredibly strong in the weight room even though he never trained. (Most swimmers are shockingly weak when it comes to lifts.) During our senior year scouts from USFL teams were still looking him over as a free safety, despite his not having played high level ball in college. There is no comparison between the quality of athlete in amateur, fringe Olympic sports and the big money sports like football and basketball.

I understand your guilt in rooting for Phelps, since he was given every opportunity by a wealthy and scientifically advanced Olympic program, but I disagree with trivializing his accomplishments to serve that guilt. However, I do agree with the statement that there is no comparison of atheletes ability in fringe olympic sports to big money sports like football/basketball/soccer etc. It is analogous to comparing a spelling bee champion with a renowned novelist.

I think athletics and swimming have similarly low participation rates in most countries (they certainly do in the UK). So Bolt and Phelps are in the same boat in my book. In any case I've always found it strange that people rank Spitz's/Phelp's achievements so highly - with all the different strokes in swimming its like having the 100m sprint running (a) normally (b) with your arms tied behind your back (c) with a blindfold etc...... It should be 100m do whatever stroke you want - that's a race. Anything else seems to me slightly absurd.

Swimming is very technical. If you don't start very early your chances of being world class are reduced significantly. That is not true of track sprinting.

Also, almost every kid knows whether they are fast -- in American football and probably in soccer too kids run sprints as part of their training. I think Bolt is really the best out of a gigantic pool of potential 100m champions, whereas there may be quite a few people who are capable of swimming like Phelps but never go near a pool. Keep in mind the 100m is THE glamour event of the Olympic games. If you had world class potential in the 100m you would probably know it just from gym class, and chances are you were encouraged to pursue sprinting no matter where you grew up. Of course in the US you might have ended up in the NFL instead of on the track, whereas in Jamaica you'd definitely be on the track :-)

He seemed both happy and actually scared to be running so fast. I don't blame him - I was scared, and I was at home in front of a TV ...

even if he is doping you might still consider him the GOAT. I think nearly all of the other top sprinters are also on drugs. they just never have been caught.

take american sprinters alone. off the top of my head, these are the top US sprinters who have been caught.

Tim Montgomery, Kelli White, Justin Gatlin, Antonio Pettigrew, Marion Jones, Dennis Mitchel, Tori Edwards. Maurice Greene has admitted that he has bought steroids before (but has never taken them because he had bought them for a team mate. eyeroll). Also, the Doctor for Carl Lewis and Joe deLaoche said that both had failed their drug tests in the 88 Olympics for pseudoephedra but were still allowed to compete because the results were destroyed.

The BALCO thing was exposed only by chance. If it had not been exposed many cheaters would stil be considered "clean". There's also many ways one can get around the drug testing.

I don't regard using performance enhancers as cheating. If everyone uses them, then the playing field is level, and you are pretty much back at talent and dedication as the thing that makes the difference.

It used to be that drugs and the knowhow to use them was information for a privileged few. Nowadays, between the internet and pharmacies, anybody could supplement their training with drugs. What makes Jamaica different than, say, China or the US, is that they only have the economic base to support development in a few sports. That's no different than before drugs. [Whenever that actually was]

That dude is amazing. He looks like a monster in that picture.

Phelps is simply amazing. I do not undersatnd your point at all.

Swimmers are great athletes and Phelps deserves recognition for his achievment.

As for other athletes they are well compensated and recognized by our society.

The 8 medals shows focus in the midst of great competition. Phelps is king!

One disturbing thing, though: the previous events that impressed me as much as Bolt's 9.69 were Michael Johnson's 200m record in Atlanta and (gulp) Ben Johnson's 9.79 which totally dominated the Olympic final in 1988. We all know what happened to Ben Johnson...

The pool of talent is obviously bigger, but as you say in a lot of countries there is a significant draw away from athletics to other sports where sprinting speed gives you an advantage. In the UK the draw is massive, everyone wants to be a footballer and its not hard to understand why - get to be a top 4 in the country sprinter you'll have a comfortable living until age ~30, get to be a top 500 in the country footballer you'll be a millionaire. I can't think of a comparable effect in swimming. All very difficult to quantify though.

Don't be so hard on Bolt. Remember, he stll has several more races to do. He was simply saving himself for the latter races. As anyoe who has done the 100m will tell you, it drains your muscles and you risk injury if you try to run through the finish line as fast as you can.