The New Yorker has a great piece on the resurgent nationalism of young Chinese intellectuals.

A couple of weeks later, I met Tang Jie at the gate of Fudan University, a top Chinese school, situated on a modern campus that radiates from a pair of thirty-story steel-and-glass towers that could pass for a corporate headquarters. He wore a crisp powder-blue oxford shirt, khakis, and black dress shoes. He had bright hazel eyes and rounded features—a baby face, everyone tells him—and a dusting of goatee and mustache on his chin and upper lip. He bounded over to welcome me as I stepped out of a cab, and he tried to pay my fare.

Tang spends most of his time working on his dissertation, which is on Western philosophy. He specializes in phenomenology; specifically, in the concept of “intersubjectivity,” as theorized by Edmund Husserl, the German philosopher who influenced Sartre, among others. In addition to Chinese, Tang reads English and German easily, but he speaks them infrequently, so at times he swerves, apologetically, among languages. He is working on his Latin and Ancient Greek. He is so self-effacing and soft-spoken that his voice may drop to a whisper. He laughs sparingly, as if he were conserving energy. For fun, he listens to classical Chinese music, though he also enjoys screwball comedies by the Hong Kong star Stephen Chow. He is proudly unhip. The screen name CTGZ is an adaptation of two obscure terms from classical poetry: changting and gongzi, which together translate as “the noble son of the pavilion.” Unlike some élite Chinese students, Tang has never joined the Communist Party, for fear that it would impugn his objectivity as a scholar.

Tang had invited some friends to join us for lunch, at Fat Brothers Sichuan Restaurant, and afterward we all climbed the stairs to his room. He lives alone in a sixth-floor walkup, a studio of less than seventy-five square feet, which could be mistaken for a library storage room occupied by a fastidious squatter. Books cover every surface, and great mounds list from the shelves above his desk. His collections encompass, more or less, the span of human thought: Plato leans against Lao-tzu, Wittgenstein, Bacon, Fustel de Coulanges, Heidegger, the Koran. When Tang wanted to widen his bed by a few inches, he laid plywood across the frame and propped up the edges with piles of books. Eventually, volumes overflowed the room, and they now stand outside his front door in a wall of cardboard boxes.

Tang slumped into his desk chair. We talked for a while, and I asked if he had any idea that his video would be so popular. He smiled. “It appears I have expressed a common feeling, a shared view,” he said.

Next to him sat Liu Chengguang, a cheerful, broad-faced Ph.D. student in political science who recently translated into Chinese a lecture on the subject of “Manliness” by the conservative Harvard professor Harvey Mansfield. Sprawled on the bed, wearing a gray sweatshirt, was Xiong Wenchi, who earned a Ph.D. in political science before taking a teaching job last year. And to Tang’s left sat Zeng Kewei, a lean and stylish banker, who picked up a master’s degree in Western philosophy before going into finance. Like Tang, each of his friends was in his twenties, was the first in his family to go to college, and had been drawn to the study of Western thought.

“China was backward throughout its modern history, so we were always seeking the reasons for why the West grew strong,” Liu said. “We learned from the West. All of us who are educated have this dream: Grow strong by learning from the West.”

Tang and his friends were so gracious, so thankful that I’d come to listen to them, that I began to wonder if China’s anger of last spring should be viewed as an aberration. They implored me not to make that mistake.

“We’ve been studying Western history for so long, we understand it well,” Zeng said. “We think our love for China, our support for the government and the benefits of this country, is not a spontaneous reaction. It has developed after giving the matter much thought.”

In fact, their view of China’s direction, if not their vitriol, is consistent with the Chinese mainstream. Almost nine out of ten Chinese approve of the way things are going in the country—the highest share of any of the twenty-four countries surveyed this spring by the Pew Research Center. (In the United States, by comparison, just two out of ten voiced approval.) As for the more assertive strain of patriotism, scholars point to a Chinese petition against Japan’s membership in the U.N. Security Council. At last count, it had attracted more than forty million signatures, roughly the population of Spain. ...

When people began rioting in Lhasa in March, Tang followed the news closely. As usual, he was receiving his information from American and European news sites, in addition to China’s official media. Like others his age, he has no hesitation about tunnelling under the government firewall, a vast infrastructure of digital filters and human censors which blocks politically objectionable content from reaching computers in China. Younger Chinese friends of mine regard the firewall as they would an officious lifeguard at a swimming pool—an occasional, largely irrelevant, intrusion.

To get around it, Tang detours through a proxy server—a digital way station overseas that connects a user with a blocked Web site. He watches television exclusively online, because he doesn’t have a TV in his room. Tang also receives foreign news clips from Chinese students abroad. (According to the Institute of International Education, the number of Chinese students in the United States—some sixty-seven thousand—has grown by nearly two-thirds in the past decade.) He’s baffled that foreigners might imagine that people of his generation are somehow unwise to the distortions of censorship.

“Because we are in such a system, we are always asking ourselves whether we are brainwashed,” he said. “We are always eager to get other information from different channels.” Then he added, “But when you are in a so-called free system you never think about whether you are brainwashed.”

Also, see this Times profile of 110m hurdler Liu Xiang, and this discussion of the Chinese drive for medal dominance. Note, despite a population base of 1.3 billion, a Soviet-style sports system with a budget of billions of dollars, and an acute hunger for success, I predict that the Chinese will be surpassed by Jamaica (3M people with rudimentary training facilities) on the track. 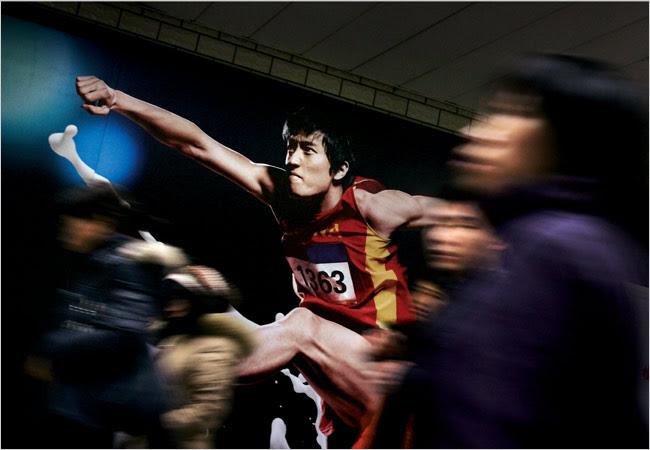 And this: Orville Schell, writing in the New York Review of Books, China: Humiliation & the Olympics.
Posted by Steve Hsu at 12:30 AM

Nationalism and intellectual are kind of mutually exclusive, right?

Nationalism and intellectual are kind of mutually exclusive, right?

Anyone who has contemplated the world long enough, soon realizes that nationalism is a virus of the mind, a weakness exploited by the despots, and an evil that must be fought, not promoted.

>>Anyone who has contemplated the world long enough, soon realizes that nationalism is a virus of the mind, a weakness exploited by the despots, and an evil that must be fought, not promoted.<<

Anyone who has contemplated the world also knows that what really is mutually exclusive with intellectual is a reliance on vacuous slogans.

I was thinking that that isn't exactly the relationship. Nationalism is an emotional response. It appeals to our [irrational] selves. Intellectualism is an appeal to our rational selves.

Denying ourselves the responses of the type of the former is denying a fundamental part of our humanity. Sneering someone else's emotional responses is a naive duplicity.

How we approach and resolve the two kinds of features in our selves is central to defining our Self. It's a question of defining your personal control rules, and Rod, you should appreciate that. The article gets, in the end, to the synthesis that these guys have made.

The slogan is wrong, principally in that it decries outcomes, and an incomplete description of the outcomes at that. It completely misses the causes. It sounds an awful lot like the kind of partisan propaganda that you would use to stoke nationalism [maybe more clearly, invoking the anti-christ implies the existence of the christ]

On a different note, how are you going to teach your son Chinese, Steve? Do you have a good reading list for 1st and 2nd grade aged kids?

There are plans to add a Chinese immersion school to the already existing Japanese, French and Spanish immersion schools in Eugene. This is all part of our amazing public school system.

Re: nationalism, even a rational person can appreciate that their interests, in the current world situation, are best advanced within the organizational structure of a nation state. I don't think the average Chinese person should rely on the US or Russia to protect their interests.

So much for the "fair and balanced" free press here.

I'm envious of both the school system and the community that can support it.

I was actually going to say something about the importance of organization and structure being an important geopolitical facility, but I thought the discussion would decay to semantic wrangling about what exactly nationalism is.

The guys in the article have a simple pride of process. China is 'doing it right'. This is similar to the sentiment of the Romans and the Napoleonic French (and probably others that I don't know).

In the spirit of the betafication post. This quote:
Because we are in such a system, we are always asking ourselves whether we are brainwashed
Is 'Unique' alpha in their social currency. By the time that sentiment is adopted by the working class smart-people, and co-opted by the average, uhh, Zhou, it will go through to becoming pedestrian social variance [this is Prof. Lo's adaptive market hypothesis as a social mechanism, no?]. How will it scale?

But this is really afield of the article itself.

Contrast the New Yorker piece with this American poll.
**********
David writes, The guys in the article have a simple pride of process. China is 'doing it right'.

I agree up to a point, but what happens when the process falters? The process may be flawed; you may have made mistakes of implementation; or your enemies may be responsible. Making the wrong diagnosis will deepen the trouble.

I do think that the Chinese should protect their interests. If they don't, no one will. I see that as a form of patriotism, not as nationalism. Maybe I should have made that clear from the beginning.

I fully agree that nationalism appeals to our emotions, while intellectualism appeals to our reason. Reason and emotion are necessary, and I don't think suppressing either one is healthy. Like you said, it's all about controls. I don't care if people from country X are nationalist just as long as they don't plan to kill me just because I was born on country Y.

The least you could do is to sign your real name. Come on. This is a family-friendly blog. Moreover, I am not relying on vacuous slogans, I am relying on evidence. WW1 and WW2 are good evidence of what nationalism on steroids leads to. I suppose you're American, but I happen to be from Europe, and here the memory of war is still much alive. And it's not a good memory.