Bolt is the greatest of all time 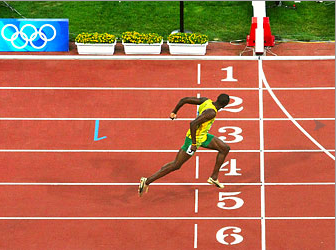 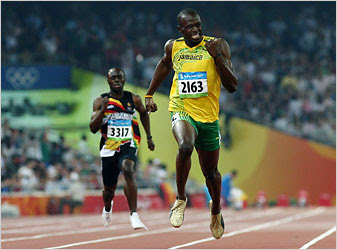 19.30 in the 200m, breaking Michael Johnson's record! Two world records, two gold medals. He led by 10m at the finish, and this time there was no show boating.

I remember watching Johnson set the record in Atlanta (on television). I couldn't imagine when -- if ever -- it would be broken.

In the semifinal heat yesterday Bolt looked like he was jogging at the finish, yet placed ahead of Shawn Crawford, the defending gold medalist from Athens who finished third in the final. Bolt destroyed his competition effortlessly. He is a superman among boys.

Hopefully the silly US media will forget about Phelps and focus on the real story in Beijing. Note added: Bolt donated $50k to earthquake relief in Sichuan province. He said he was moved to tears on the night of winning the 200m race, when more than 90,000 spectators in the Bird's Nest sang "happy birthday" for him. Unfortunately, not of interest to NBC.

NYTimes: The margin of victory seemed almost impossible. His finishing time, a sport-shattering moment. Just days after Usain Bolt electrified track and field with a world-record run for the ages in the 100 meters, he might have outdone himself in the 200.

Jamaica’s wunderkind surged so far ahead of a stellar Olympic final field Wednesday night that the final 50 meters inspired sheer awe. Running hard through the finish, Bolt not only ran 19.30, breaking the world record by two-hundredths of a second less than two hours before his 22nd birthday, but he seemed to set new parameters on what humans can achieve.

This time, unlike in the 100 meters, Bolt ran hard the entire race, clearly wanting to show what he can do when he is serious. In the 100, he essentially stopped racing with about 10 meters to go, threw out his arms and slapped his chest before he crossed the finish line. That made his time of 9.69 — .03 better than the world record — that much more astounding because it could have been even lower.

In the 200, Bolt overpowered the field in the turn, entering the straighaway with the only question left being how much would he win by and would he break the world record. That was 19.32 seconds, set by the American Michael Johnson at the 1996 Atlanta Games. Before Wednesday night, Johnson’s record run was the only performance under 19.62. Bolt’s previous personal best was 19.67.

More from George Vecsey of the Times; Michael Johnson agrees with me on the singular nature of Bolt's performance:

NYTimes: ...“It was the most impressive athletic performance I have ever seen in my life,” Johnson said Wednesday, before the next one. “It was amazing to watch — especially since I didn’t have to watch from behind.”

...Usain Bolt has made this a two-athlete Olympics. In two bursts of speed, he has matched much of the buzz for Michael Phelps, who won eight medals in the pool. Bolt’s two gold medals were won out in the open, on two feet. The first one was play. The second was work. But both are records. Kiss the old ones goodbye.

I wonder if he's still going to run the 400m next year?

From what I understand he never liked the hard training necessary for the 400. He was originally a 200/400 man, which is what you'd expect for someone his height. His coach only allowed him to run the 100 as a reward for breaking the Jamaican record in the 200 (19.75?) this year. He's still very raw in the 100.

He needs some new challenge, anyway; this is far too easy for him. Long jump maybe?

Maybe we can teach him how to catch a football. :)

he was running into a .9 headwind.

Maybe Jaimaca should put him in all the events. he might break Phelp's swimming records doing the doggy paddle.

this guy shouldn't be running, he should be fighting crime.

It looked to me when he was running in the 200m heats like he was literally jogging for the last 100m and still running ~20.2; I wonder what time he would have done for 400m if he'd just kept running?!?! World record for 100m, 200m and 400m concurrently, thats gotta be a big carrot! He looks to me to have the build of a 400m runner - I speculate that he could be relatively even better in that event.

Hats off to you. You are remarkably perceptive when it comes to so many things! You were indeed prescient in noting that Johnson's record is in danger in the previous post :)

Have not been following much of the Olympics---frankly, I am more interested in the sights of Beijing (mind-blowing, when compared to any Indian city).

I was initially surprised when you picked Bolt over Phelps, but your reasoning is convincing to me---yep, Bolt is greatest.

Anyway, just thought I should mention that it is always interesting to read your blog. And I am looking forward to more interesting China entries from you.

PS: Regarding math, physics Olympiads, Indian performance is not great because everybody is busy preparing for the IITs---no time to waste for Olympiads!! Neverthless, Chinese dominance in the past few years is astonishing, and I am sure that in a generation or two creative dominance will also follow.

And the abs. embarassing Olympics performance of India is not likely to be improved---ever :) People are more interested in cricket (even there they are not #1), or just love to watch great performers from other countries. "Read and become a doctor or engineer and don't waste time in sports" is the usual Indian parent refrain.

g: Bolt has the potential to hold the records at all 3 distances. But you could see he was gutting out the last of the 200m when he ran 19.30. He'd have to train pretty hard to have the stamina to run sub-43 in the 400m. He could do it -- and if he had Michael Johnson's determination in training he would shatter the existing record. But he seems like an easygoing guy and it is not clear whether he will develop his superhuman talent to its fullest potential. No doubt he can lower the 100 and 200 records substantially, though. He just turned 22!

MFA: thanks again for the kind words! I'm planning to return to more typical subjects in future posts :-)

This Olympics is a big watershed for China as it was for Korea back in 88 and Japan in 64 (see the great documentary Tokyo Olympiad). You can't underestimate how something like this affects the worldview of average people around the world. They don't understand GDP per capita or number of patents or PISA scores. They are judging based on the images seen on television, and athletes feature very prominently in their mental typology.

You might argue China wasted too much money on these games, and I might agree if you compare to some really ideal reallocation of the resources (e.g., to rural schools) but that's like saying that Coca Cola or Toyota spend too much money on marketing. The success of these games will pay dividends in the long run.

He did once train competively for the 400. In fact, he attributed his success in the 100 to 400 training!

Tim Noakes, a professor of sports science here in SA commented that Bolt had a very bouncy style of running. He speculated that Bolt stored energy in his bounce and might have discovered a new way of running.

Every sprint coach in the world is studying the tapes right now. Expect the Bolt clones to appear soon.