Scifoo 2008 was tremendous fun. Thanks to all the organizers from Google, Nature and O'Reilly who made it happen.

I guess I'm used to meetings with enormous concentrations of brainpower, but usually the attendees share similar backgrounds. At Scifoo the diversity of knowledge is overwhelming.

I didn't take very many photos because I was too busy trying to absorb every bit of information I could during the conference.

Here's a shot of the crowd at the last session, which consisted of 2 minute recaps of some popular talks. Coincidentally, there are a number of physicists in the foreground: Wally Gilbert (a student of Abdus Salam who later won the Nobel prize for work in molecular biology and co-founded Biogen. He was a Senior Fellow when I was at Harvard), Sabine Hossenfelder (Perimeter Institute and blogger) and Paul Davies (relativist and author, looking down into his bag). 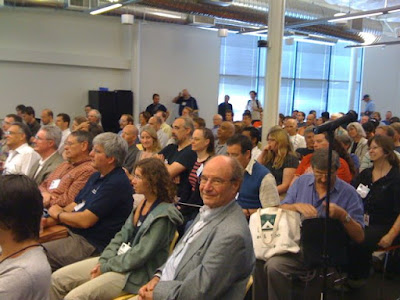 In this shot you can see Sara Winge, Tim O'Reilly, Chris DiBona and Timo Hannay at the front of the room. 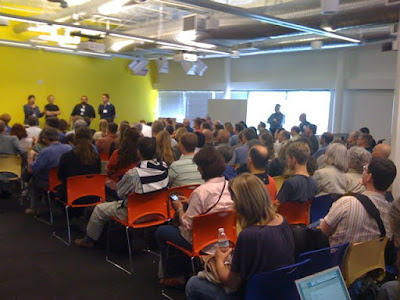 This is a shot I took at lunch of Shane Carruth, who wrote and directed the movie Primer. I had a great time discussing the similarities between indie film making and tech startups with him. The next day he was off to Hollywood to pitch the script he's been writing for the last 2 years. Good luck Shane! (As is typical of Scifoo, the guys not pictured who were eating with us included an entrepreneur biologist whose company makes stem cells, and the physicist Lee Smolin.) 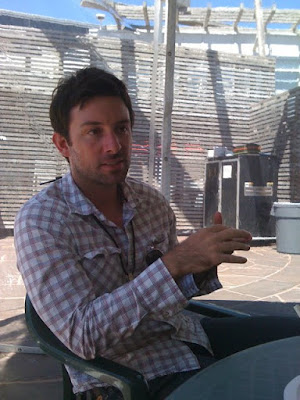 This one was taken by Esther Dyson. In the foreground are George Dyson, Stewart Brand, Danny Hillis and Neal Stephenson (who attended my high school and shares my interest in jiujitsu :-) George Dyson gave an amazing talk on the history of the Monte Carlo method, focusing on a newly discovered set of telegrams between von Neumann and his wife which spanned the development of the atomic bomb and the first electronic computers. I've always been astonished that no one has written a great biography of von Neumann, but George may be taking on that task. 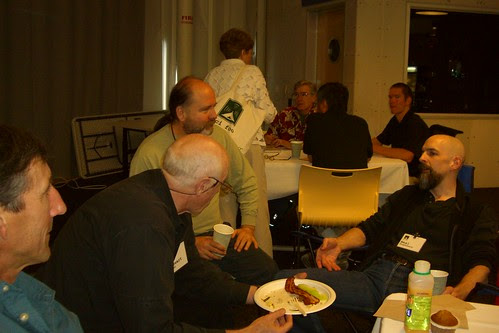 Here's another nice set at Flickr. And another, which includes this shot of the session boards: 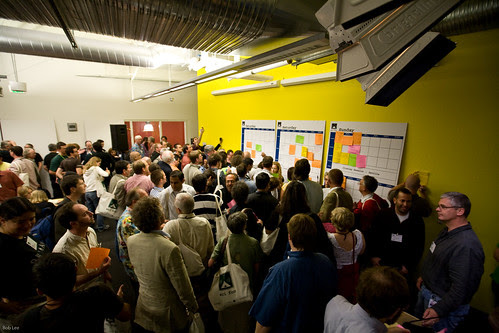 Thanks for taking that shot of Shane. That was just another one of those lunch conversations where a couple days later you sit back and say "wow, I wish I had that on tape."

I am still collecting as much data as I can from other bloggers before daring my own post, but will be certain to link back to this one!

Was nice to meet you at SciFoo! I didn't know you're blogging, so we're basically neighbors ;-)

Frog: looking froward to your thoughts. Please add a link here when you put up your post.

Bee: It was great to meet you as well! Your thoughts on Scifoo that you shared over the last couple of days are very interesting. I didn't have the stamina to write a systematic summary on the conference. :-)

I broke the whole Scifoo adventure into a 4 part series. Just too many stories to tell and I don't think I did any of the justice.

I forget that Blogger uses my other moniker, the old College nickname.
Jim H