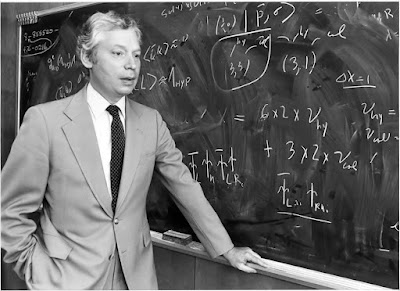 Steven Weinberg, a giant of theoretical physics, passed on July 23, 2021 -- he was 88 years old. His best known work, for which he received the Nobel prize, proposed the unification of electromagnetic and weak forces, and formed a key component of the Standard Model of particle physics. But his lifetime of work ranged from cosmology to gravitation to quantum field theory to foundations of quantum mechanics. A brief autobiography.

Wikipedia: It is a story widely told that Steven Weinberg, who inherited Schwinger's paneled office in Lyman Laboratory (Harvard Physics department), there found a pair of old shoes, with the implied message, "think you can fill these?"

Indeed, it is true that almost no one on the planet could have filled Schwinger's shoes. But Big Steve did, and more.
Below I've reproduced a post from 2017, Steven Weinberg: What's the matter with quantum mechanics?
The video of Weinberg's talk is from 2016, when he would have been 83 or so.

In this public lecture Weinberg explains the problems with the two predominant interpretations of quantum mechanics, which he refers to as Instrumentalist (e.g., Copenhagen) and Realist (e.g., Many Worlds). The term "interpretation" may be misleading because what is ultimately at stake is the nature of physical reality. Both interpretations have serious problems, but the problem with Realism (in Weinberg's view, and my own) is not the quantum multiverse, but rather the origin of probability within deterministic Schrodinger evolution. Instrumentalism is, of course, ill-defined nutty mysticism 8-)

Physicists will probably want to watch this at 1.5x or 2x speed. The essential discussion is at roughly 22-40min, so it's only a 10 minute investment of your time. These slides explain in pictures.

See also Weinberg on Quantum Foundations, where I wrote:


It is a shame that very few working physicists, even theoreticians, have thought carefully and deeply about quantum foundations. Perhaps Weinberg's fine summary will stimulate greater awareness of this greatest of all unresolved problems in science.


... today there is no interpretation of quantum mechanics that does not have serious flaws.

Posts on this blog related to the Born Rule, etc., and two of my papers:


The measure problem in many worlds quantum mechanics

On the origin of probability in quantum mechanics


Dynamical theories of wavefunction collapse are necessarily non-linear generalizations of Schrodinger evolution, which lead to problems with locality.

Among those who take the Realist position seriously: Feynman and Gell-Mann, Schwinger, Hawking, and many more.
Posted by Steve Hsu at 12:30 PM