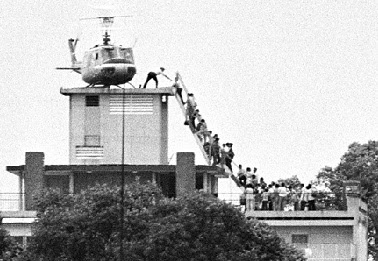 There are photos and video to remind us of the ignominious US withdrawal from S. Vietnam after twenty years of conflict and millions of deaths.
Over the July 4th weekend, the US military abandoned Bagram airforce base in Afghanistan, without even informing the Afghan commander and his troops.
Conveniently for our warmongering neocon "nation-building" interventionist elites, there are (as yet) no photos of this pullout.

BAGRAM, Afghanistan (AP) — The U.S. left Afghanistan’s Bagram Airfield after nearly 20 years by shutting off the electricity and slipping away in the night without notifying the base’s new Afghan commander, who discovered the Americans’ departure more than two hours after they left, Afghan military officials said.

Afghanistan’s army showed off the sprawling air base Monday, providing a rare first glimpse of what had been the epicenter of America’s war to unseat the Taliban and hunt down the al-Qaida perpetrators of the 9/11 attacks on America. The U.S. announced Friday it had completely vacated its biggest airfield in the country in advance of a final withdrawal the Pentagon says will be completed by the end of August.

“We (heard) some rumor that the Americans had left Bagram ... and finally by seven o’clock in the morning, we understood that it was confirmed that they had already left Bagram,” Gen. Mir Asadullah Kohistani, Bagram’s new commander said. ...

I wrote the following (2017) in Remarks on the Decline of American Empire:

1. US foreign policy over the last decades has been disastrous -- trillions of dollars and thousands of lives expended on Middle Eastern wars, culminating in utter defeat. This defeat is still not acknowledged among most of the media or what passes for intelligentsia in academia and policy circles, but defeat it is. Iran now exerts significant control over Iraq and a swath of land running from the Persian Gulf to the Mediterranean. None of the goals of our costly intervention have been achieved. We are exhausted morally, financially, and militarily, and still have not fully extricated ourselves from a useless morass. George W. Bush should go down in history as the worst US President of the modern era.

2. We are fortunate that the fracking revolution may lead to US independence from Middle Eastern energy. But policy elites have to fully recognize this possibility and pivot our strategy to reflect the decreased importance of the region. The fracking revolution is a consequence of basic research from decades ago (including investment from the Department of Energy) and the work of private sector innovators and risk-takers.

3. US budget deficits are a ticking time bomb, which cripple investment in basic infrastructure and also in research that creates strategically important new technologies like AI. US research spending has been roughly flat in inflation adjusted dollars over the last 20 years, declining as a fraction of GDP.

4. Divisive identity politics and demographic trends in the US will continue to undermine political cohesion and overall effectiveness of our institutions. ("Civilizational decline," as one leading theoretical physicist observed to me recently, remarking on our current inability to take on big science projects.)

5. The Chinese have almost entirely closed the technology gap with the West, and dominate important areas of manufacturing. It seems very likely that their economy will eventually become significantly larger than the US economy. This is the world that strategists have to prepare for. Wars involving religious fanatics in unimportant regions of the world should not distract us from a possible future conflict with a peer competitor that threatens to match or exceed our economic, technological, and even military capability.

If you are young and naive and still believe that we can mostly trust our media and government, watch these videos for a dose of reality.
[ The video embedded above was a documentary about Julian Assange and Wikileaks on the DW channel, which I had queued to show the Collateral Murder video. It included an interview with the US soldier who saved one of the children in the rescue van that was hit with 30mm Apache fire. Inexplicably, DW has now removed the video from their channel. Click through to YouTube below for the content. ]
Some things never change. Recall the personal sacrifices made by people like Daniel Ellsberg to reveal the truth about the Vietnam war. Today it is Julian Assange...
Note Added: While it was easy to predict this outcome in 2017, it wasn't much harder to call it in 2011. See this piece from The Onion:

KABUL, AFGHANISTAN—In what officials said was the "only way" to move on from what has become a "sad and unpleasant" situation, all 100,000 U.S. military and intelligence personnel crept out of their barracks in the dead of night Sunday and quietly slipped out of Afghanistan.

U.S. commanders explained their sudden pullout in a short, handwritten note left behind at Bagram Airfield, their largest base of operations in the country.

"By the time you read this, we will be gone," the note to the nation of Afghanistan read in part. "We regret any pain this may cause you, but this was something we needed to do. We couldn't go on like this forever."

"We still care about you very much, but, in the end, we feel this is for the best," the note continued. "Please, just know that we are truly sorry and that we wish you all the greatest of happiness in the future."

... After reportedly taking a "long look in the mirror" last week, senior defense officials came to the conclusion that they had "wasted a decade of [their] lives" with Afghanistan ...