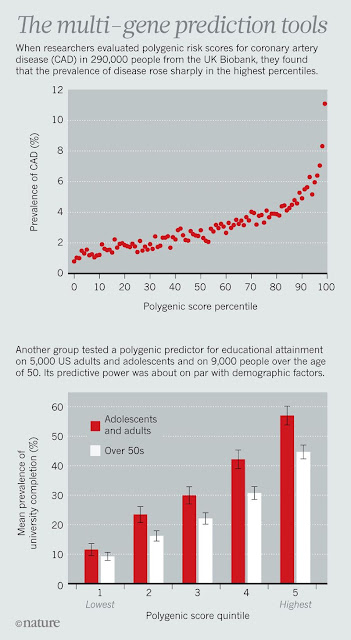 ... Supporters say that polygenic scores could be the next great stride in genomic medicine, but the approach has generated considerable debate. Some research presents ethical quandaries as to how the scores might be used: for example, in predicting academic performance. Critics also worry about how people will interpret the complex and sometimes equivocal information that emerges from the tests. And because leading biobanks lack ethnic and geographic diversity, the current crop of genetic screening tools might have predictive power only for the populations represented in the databases.

“Most people are keen to have a decent debate about this, because it raises all sorts of logistical and social and ethical issues,” says Mark McCarthy, a geneticist at the University of Oxford, UK. Even so, polygenic scores are racing to the clinic and are already being offered to consumers by at least one US company.

Peter Visscher, a geneticist at the University of Queensland, Australia, who pioneered the methods that underlie the trend, is broadly optimistic about the approach, but is still surprised by the speed of progress. “I’m absolutely convinced this is going to come sooner than we think,” he says. ...

Below are some remarks from earlier posts. Population-wide Genomic Prediction of Health Risks:


I estimate that within a year or so there will be more than 10 good genomic predictors covering very significant disease risks, ranging from heart disease to diabetes to hypothyroidism to various cancers. These predictors will be able to identify the, e.g., few percent of the population that are outliers in risk -- for example, have 5x or 10x the normal likelihood of getting the disease at some point in their lives. Risk predictions can be made at birth (or before! or in adulthood), and preventative care allocated appropriately. All of these risk scores can be computed using a genotype read from an inexpensive (< $50 per person) array that probes ~1M or so common SNPs.


It seems to me we are just at the tipping point -- soon it will be widely understood that with large enough data sets we can predict complex traits and complex disease risk from genotype, capturing most of the estimated heritable variance. People will forget that many "experts" doubted this was possible -- the term missing heritability will gradually disappear.

In just a few years genotyping will start to become "standard of care" in many health systems. In 5 years there will be ~100M genotypes in storage (vs ~20M now), a large fraction available for scientific analysis.