Damore vs Google: Trial of the Century?

Note Added in response to 2020 Twitter mob attack which attempts to misrepresent my views: This blog post discusses the firing of James Damore by Google. It was a sensation at the time in Silicon Valley and made national news. This post is primarily about the legal status of the firing, and the legal status of the claims made by Damore in his memo. Initial media reports describing his memo were very misleading and few people made the effort to read what Damore actually wrote before attacking him.

In his memo, James Damore asserts that Google is engaged in illegal discriminatory practices as part of its efforts to increase diversity. (See earlier post, In the matter of James Damore, ex-Googler.)

The image below is from the actual memo. Does Damore sound like a sexist brogrammer Neanderthal? 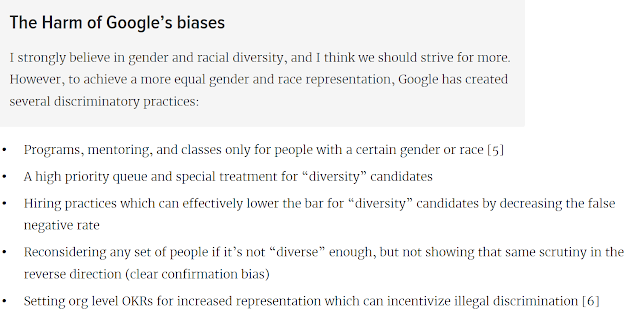 OKRs = Objectives and Key Results. Damore is pointing out that pro-diversity objectives may incentivize managers to discriminate by gender or race in hiring and promotion.

According to Margot Cleveland (attorney who teaches labor law at Notre Dame):


The Federalist: ... Damore wrote “Google has created several discriminatory practices.” This reads of a classic case of opposition to an unlawful employment practice. (Under the case law, the practice need not actually be illegal if the employee reasonably believed it discriminatory.)

This passage may well be Google’s undoing. Damore can present a prima facie case of illegal retaliation: he engaged in protected activity by opposing several discriminatory practices, and was fired from his job. The close temporal nexus creates an inference that Google fired him because of his opposition to illegal discrimination.

... Google will counter that it fired him not because of his opposition but because of the gender stereotypes he included in the memo.

But of course the Google Brain was simultaneously using these "stereotypes" = correlations as its core revenue driver: 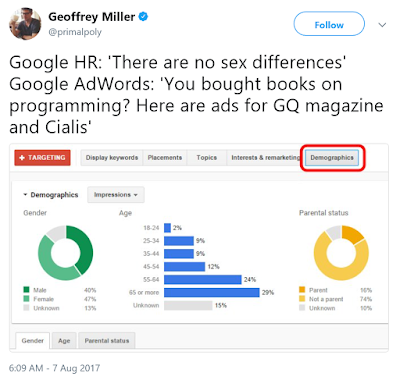 
... Once before a jury, Google will be hard-pressed to justify Damore’s firing because the jury will be force-fed the actual words Damore wrote, not the press’ hysterical gloss. In this regard, Google was in a no-win situation: Once the Neanderthal narrative formed, Google had no real choice but to fire Damore—which doesn’t make it right or, as Google is likely to find out soon, legal. In the meantime, the rest of the country will be treated to a nice civics refresher course and a deep-dive into federal employment and labor law.

Not to mention a deep-dive into the science of statistical / distributional group differences!

Bloomberg video interview with Damore.
Posted by Steve Hsu at 9:13 AM