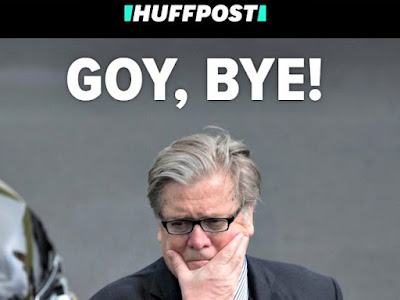 Rumor has it that Bannon will start a Breitbart TV channel to rival Fox News. Given the success of YouTube- / pod-casters like Joe Rogan (5 million downloads per episode), it's plausible this could be done with very modest capex (the channel could start out as pure streaming and only go to cable later). Billionaire Robert Mercer (Renaissance Technologies) is a likely backer.

(The headline above actually appeared on the front page of the Huffington Post when it was announced that Bannon would leave the White House. It was quickly replaced with the headline White Flight -- swing state voters and 2018 midterm election voters will not forget either headline, I predict.)

Bannon's new channel can denounce Richard Spencer, Nazis, KKK, etc. but still push economic nationalism and even mild white identity slogans like  white people have rights, too  or  everyone should be treated as an individual, based on merit ... (gee, that last one seems pretty principled... maybe they could add something catchy like the content of their character or something like that).

They can keep winning on a populist platform with just 4 messages:

Again, not really to the right of Fox, but just more consistent and less corporate GOP ("cuck") content. Tucker Carlson and Hannity could move to the new network without changing their schtick in the slightest.

Mercer would be smart to back this based entirely on financial ROI. There is massive pent-up demand: Trump got about half the popular vote, but currently no major media outlet is aligned with the views of his supporters.
Posted by Steve Hsu at 9:21 AM