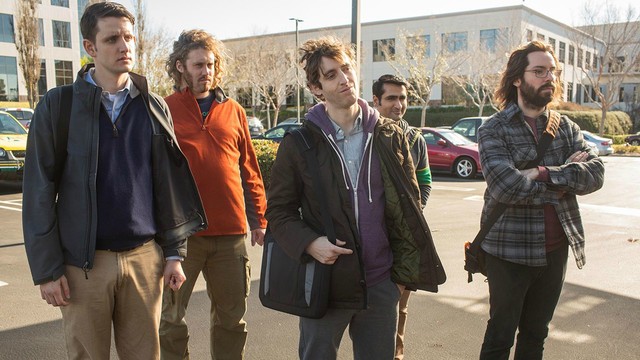 Almost all the startup people I know watch Silicon Valley (HBO), and they agree with me that it unerringly captures the essence of startup life in a hilarious way. Also good: Billions (Showtime) on the hedge fund world.


New Yorker: ... “The first part of the job is making sure we get the specifics right, because our audience won’t tolerate any mistakes,” ...

Dotan worked part-time for a few weeks, but then came on full-time. At first, he oversaw a staff of four: an expert in file compression; a user-interface engineer, to help write the code on the characters’ screens; a C-level tech executive; and a Silicon Valley lawyer, to draft realistic contracts. By the end of the first season, Dotan’s staff had grown to twelve. “If someone is holding a document on the show, that document is written out, in full, the way that it would be in real life,” ...

“Some Valley big shots have no idea how to react to the show,” Miller told me. “They can’t decide whether to be offended or flattered. And they’re mystified by the fact that actors have a kind of celebrity that they will never have—there’s no rhyme or reason to it, but that’s the way it is, and it kills them.” Miller met Musk at the after-party in Redwood City. “I think he was thrown by the fact that I wasn’t being sycophantic—which I couldn’t be, because I didn’t realize who he was at the time. He said, ‘I have some advice for your show,’ and I went, ‘No thanks, we don’t need any advice,’ which threw him even more. And then, while we’re talking, some woman comes up and says ‘Can I have a picture?’ and he starts to pose—it was kinda sad, honestly—and instead she hands the camera to him and starts to pose with me. It was, like, Sorry, dude, I know you’re a big deal—and, in his case, he actually is a big deal—but I’m the guy from ‘Yogi Bear 3-D,’ and apparently that’s who she wants a picture with.”

The three biggest public companies in the world, as measured by market capitalization, are Apple, the Google parent company Alphabet, and Microsoft. Are they enlightened agents of philanthrocapitalism or robber-baron monopolies? “In the real Silicon Valley, as on the show, there is a cohort of people who have a real sense of purpose and actually think they’re going to change the world, and then there’s a cohort of people who say farcical things about their apps that they clearly don’t believe themselves,” Sam Altman, who runs the startup incubator Y Combinator, told me. The show accurately reflects this complexity because the people who make it—like all thoughtful people, including the most powerful people in Silicon Valley—can’t decide how they feel about Silicon Valley. “I swing back and forth,” Clay Tarver, one of the show’s writers and producers, told me. “The more I meet these people and learn about them, the more I come away thinking that, despite all the bullshit and greed, there actually is something exciting and hopeful going on up there.”