Note Added in response to 2020 Twitter mob attack which attempts to misrepresent my views: This is not my research. It is the work of an very well-funded (NIH) neuro-imaging collaboration primarily at UCSD. They are pointing out that an algorithm trained on MRI data and genomes can classify individuals by ancestry, based only on an image of their brain. No one is claiming, or has looked into, any functional implications of these morphological differences. It's simply data science at this point.

Racist inferences based on the results are the fault of the reader, not the authors of the paper or of this blog. 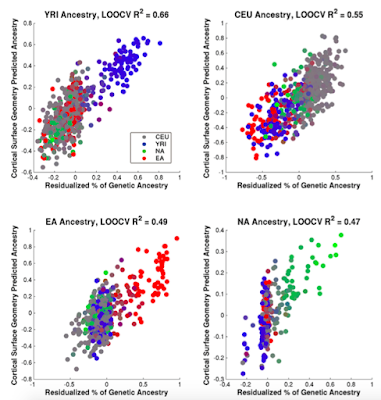 Population structure -- i.e., distribution of gene variants by ancestral group -- is reflected in brain morphology, as measured using MRI. Brain morphology measurements can be used to predict ancestry. Strictly speaking, the data only show correlation, not genetic causation, but the most plausible interpretation is that genetic differences are causing morphological differences. One could check this easily by comparing individuals raised in different environments and cultures.

Most of the authors are associated with UCSD. From the paper:


PING (Pediatric Imaging, Neurocognition, and Genetics) was a multisite project recruiting children and adolescents from ages 3 to 21 at ten sites in the United States. All participants were screened for history of major developmental, psychiatric, and neurological disorders; brain injury; and other medical conditions that affect development. Participants then received neurodevelopmental assessments, standardized multi-modal neuroimaging, and genome-wide genotyping. The overall PING sample consisted of 1,493 participants; 1,152 individuals remained after quality control of the genotyping and neuroimaging data.

... Our data indicate that the unique folding patterns of gyri and sulci are closely aligned with genetic ancestry. The geometry robustly predicts each individual’s genetic background even though the population has been shaped by waves of migration and admixtures. A previous study, using only facial features, achieved 64% explained variance in YRI ancestry among African Americans [19]. Our 3D representation of cortical surface geometry performs similarly in predicting YRI ancestry and also performs well for the other three continental ancestries. As data in Table 1 show, the explanatory power is not due to the differences in total brain volumes, nor to the differences in areal expansion of the cortical surface. Instead, regional folding patterns characterize each ancestral lineage. ...


Modeling the 3D Geometry of the Cortical Surface with Genetic Ancestry

Summary
Knowing how the human brain is shaped by migration and admixture is a critical step in studying human evolution [1, 2], as well as in preventing the bias of hidden population structure in brain research [3, 4]. Yet, the neuroanatomical differences engendered by population history are still poorly understood. Most of the inference relies on craniometric measurements, because morphology of the brain is presumed to be the neurocranium’s main shaping force before bones are fused and ossified [5]. Although studies have shown that the shape variations of cranial bones are consistent with population history [6–8], it is unknown how much human ancestry information is retained by the human cortical surface. In our group’s previous study, we found that area measures of cortical surface and total brain volumes of individuals of European descent in the United States correlate significantly with their ancestral geographic locations in Europe [9]. Here, we demonstrate that the three-dimensional geometry of cortical surface is highly predictive of individuals’ genetic ancestry in West Africa, Europe, East Asia, and America, even though their genetic background has been shaped by multiple waves of migratory and admixture events. The geometry of the cortical surface contains richer information about ancestry than the areal variability of the cortical surface, independent of total brain volumes. Besides explaining more ancestry variance than other brain imaging measurements, the 3D geometry of the cortical surface further characterizes distinct regional patterns in the folding and gyrification of the human brain associated with each ancestral lineage.


This figure shows ancestry admixture using PCA. The figure at top shows that brain morphological parameters can be used to build a reasonably good classifier.