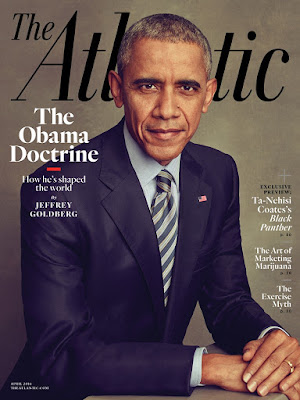 Unlike Hillary, but like Donald Trump and George H.W. Bush, Obama is (mostly) a foreign policy realist.


The Atlantic ... Obama, unlike liberal interventionists, is an admirer of the foreign-policy realism of President George H. W. Bush and, in particular, of Bush’s national-security adviser, Brent Scowcroft (“I love that guy,” Obama once told me). Bush and Scowcroft removed Saddam Hussein’s army from Kuwait in 1991, and they deftly managed the disintegration of the Soviet Union; Scowcroft also, on Bush’s behalf, toasted the leaders of China shortly after the slaughter in Tiananmen Square. As Obama was writing his campaign manifesto, The Audacity of Hope, in 2006, Susan Rice, then an informal adviser, felt it necessary to remind him to include at least one line of praise for the foreign policy of President Bill Clinton, to partially balance the praise he showered on Bush and Scowcroft.

At the outset of the Syrian uprising, in early 2011, [Samantha] Power argued that the rebels, drawn from the ranks of ordinary citizens, deserved America’s enthusiastic support. Others noted that the rebels were farmers and doctors and carpenters, comparing these revolutionaries to the men who won America’s war for independence.

Obama flipped this plea on its head. “When you have a professional army,” he once told me, “that is well armed and sponsored by two large states”—Iran and Russia—“who have huge stakes in this, and they are fighting against a farmer, a carpenter, an engineer who started out as protesters and suddenly now see themselves in the midst of a civil conflict …” He paused. “The notion that we could have—in a clean way that didn’t commit U.S. military forces—changed the equation on the ground there was never true.” The message Obama telegraphed in speeches and interviews was clear: He would not end up like the second President Bush—a president who became tragically overextended in the Middle East, whose decisions filled the wards of Walter Reed with grievously wounded soldiers, who was helpless to stop the obliteration of his reputation, even when he recalibrated his policies in his second term. Obama would say privately that the first task of an American president in the post-Bush international arena was “Don’t do stupid shit.”

Obama’s reticence frustrated Power and others on his national-security team who had a preference for action. Hillary Clinton, when she was Obama’s secretary of state, argued for an early and assertive response to Assad’s violence. In 2014, after she left office, Clinton told me that “the failure to help build up a credible fighting force of the people who were the originators of the protests against Assad … left a big vacuum, which the jihadists have now filled.” When The Atlantic published this statement, and also published Clinton’s assessment that “great nations need organizing principles, and ‘Don’t do stupid stuff’ is not an organizing principle,” Obama became “rip-shit angry,” according to one of his senior advisers. The president did not understand how “Don’t do stupid shit” could be considered a controversial slogan. Ben Rhodes recalls that “the questions we were asking in the White House were ‘Who exactly is in the stupid-shit caucus? Who is pro–stupid shit?’ ” The Iraq invasion, Obama believed, should have taught Democratic interventionists like Clinton, who had voted for its authorization, the dangers of doing stupid shit. (Clinton quickly apologized to Obama for her comments, and a Clinton spokesman announced that the two would “hug it out” on Martha’s Vineyard when they crossed paths there later.) ...

... Obama generally believes that the Washington foreign-policy establishment, which he secretly disdains, makes a fetish of “credibility”—particularly the sort of credibility purchased with force. The preservation of credibility, he says, led to Vietnam. Within the White House, Obama would argue that “dropping bombs on someone to prove that you’re willing to drop bombs on someone is just about the worst reason to use force.”

... I asked the president how he thought his foreign policy might be understood by historians. He started by describing for me a four-box grid representing the main schools of American foreign-policy thought. One box he called isolationism, which he dismissed out of hand. “The world is ever-shrinking,” he said. “Withdrawal is untenable.” The other boxes he labeled realism, liberal interventionism, and internationalism. “I suppose you could call me a realist in believing we can’t, at any given moment, relieve all the world’s misery,” he said. “We have to choose where we can make a real impact.” He also noted that he was quite obviously an internationalist, devoted as he is to strengthening multilateral organizations and international norms.

... Those who speak with Obama about jihadist thought say that he possesses a no-illusions understanding of the forces that drive apocalyptic violence among radical Muslims, but he has been careful about articulating that publicly, out of concern that he will exacerbate anti-Muslim xenophobia. He has a tragic realist’s understanding of sin, cowardice, and corruption, and a Hobbesian appreciation of how fear shapes human behavior. And yet he consistently, and with apparent sincerity, professes optimism that the world is bending toward justice. He is, in a way, a Hobbesian optimist.

... Libya proved to him that the Middle East was best avoided. “There is no way we should commit to governing the Middle East and North Africa,” he recently told a former colleague from the Senate. “That would be a basic, fundamental mistake.”

... The president also gets frustrated that terrorism keeps swamping his larger agenda, particularly as it relates to rebalancing America’s global priorities. For years, the “pivot to Asia” has been a paramount priority of his. America’s economic future lies in Asia, he believes, and the challenge posed by China’s rise requires constant attention.

... Obama believes, [Ash] Carter said, that Asia “is the part of the world of greatest consequence to the American future, and that no president can take his eye off of this.”

... One of the most destructive forces in the Middle East, Obama believes, is tribalism—a force no president can neutralize. Tribalism, made manifest in the reversion to sect, creed, clan, and village by the desperate citizens of failing states, is the source of much of the Muslim Middle East’s problems, and it is another source of his fatalism. Obama has deep respect for the destructive resilience of tribalism—part of his memoir, Dreams From My Father, concerns the way in which tribalism in post-colonial Kenya helped ruin his father’s life—which goes some distance in explaining why he is so fastidious about avoiding entanglements in tribal conflicts.

“It is literally in my DNA to be suspicious of tribalism,” he told me. “I understand the tribal impulse, and acknowledge the power of tribal division. I’ve been navigating tribal divisions my whole life. In the end, it’s the source of a lot of destructive acts.”

... “The fact is that Ukraine, which is a non-nato country, is going to be vulnerable to military domination by Russia no matter what we do,” he said.

I asked Obama whether his position on Ukraine was realistic or fatalistic.

“It’s realistic,” he said. “But this is an example of where we have to be very clear about what our core interests are and what we are willing to go to war for. And at the end of the day, there’s always going to be some ambiguity.”

... Obama has come to a number of dovetailing conclusions about the world, and about America’s role in it. The first is that the Middle East is no longer terribly important to American interests. The second is that even if the Middle East were surpassingly important, there would still be little an American president could do to make it a better place. The third is that the innate American desire to fix the sorts of problems that manifest themselves most drastically in the Middle East inevitably leads to warfare, to the deaths of U.S. soldiers, and to the eventual hemorrhaging of U.S. credibility and power. The fourth is that the world cannot afford to see the diminishment of U.S. power.

See also The One Sided Clash of Civilizations.
Posted by Steve Hsu at 9:28 AM