I'm occasionally asked about financial returns to cognitive ability. As a rough rule of thumb, judging from the graphs below (obtained here), I would say:


On average, an increase of IQ by one SD corresponds to  ~ $30k per annum of additional income. (Somewhat less than 1 SD in income; the distribution is far from normal.)

By early middle age, individuals > 90th percentile in IQ have, typically, more than twice the wealth of individuals who are of average IQ.

If you can find better data than what is shown below, please let me know. (How do bottom decile adults manage to earn ~ $40k per annum, on average? Does this include transfer payments?)

Of course, you can turn this around to estimate the increased (heritable) cognitive ability endowments of high income parents relative to average parents. That might help to clarify causality in results such as this one: "Studies show that children from low-income families have smaller brains and lower cognitive abilities." (Even Nature susceptible to faulty logic.)

Note, there is good evidence that positive returns to IQ persist above high thresholds (e.g., IQ=120, or even top 1 percent ability). See here and here. 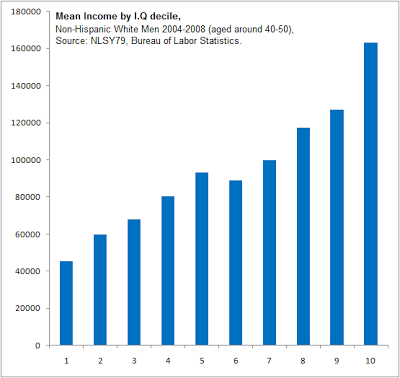 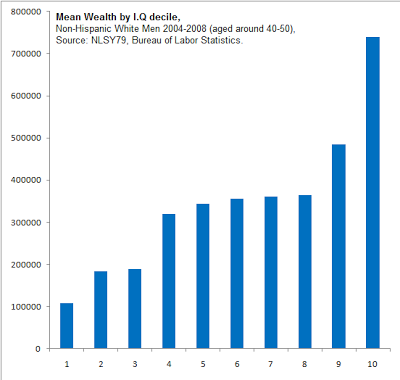 Income mobility is strongly affected by IQ. In fact, IQ is a much stronger predictor variable than race for escaping the bottom quintile of income (Pew Trust report; NLSY again, AFQT=IQ scores):

This last figure is very problematic for the "Social Status/Wealth causes IQ" position. It seems to be the other way around: the kids escaping bottom quintile childhoods all experienced poverty, but the ones with higher cognitive ability were more likely to move up. (Recall that adopted children tend to resemble their biological parents much more than their adoptive ones; family environment has a limited effect on IQ, which is highly heritable.)


Pew: Individuals with higher test scores in adolescence are more likely to move out of the bottom quintile, and test scores can explain virtually the entire black-white mobility gap. Figure 13 plots the transition rates against percentiles of the AFQT test score distribution. The upward-sloping lines indicate that, as might be expected, individuals with higher test scores are much more likely to leave the bottom income quintile. For example, for whites, moving from the first percentile of the AFQT distribution to the median roughly doubles the likelihood from 42 percent to 81 percent. The comparable increase for blacks is even more dramatic, rising from 33 percent to 78 percent. Perhaps the most stunning finding is that once one accounts for the AFQT score, the entire racial gap in mobility is eliminated for a broad portion of the distribution. At the very bottom and in the top half of the distribution a small gap remains, but it is not statistically significant.

It looks like the income numbers include transfer payments: https://www.nlsinfo.org/content/cohorts/nlsy79/topical-guide/income/income
However, the 40% and 60% numbers for transfer payments seem too low to explain the 40K mean income for the bottom decile. My guess would be the mean is skewed by outliers. It would be interesting to see Box plots of the data rather than just the means. There may also be issues with households (I believe the variable is total family income) including more earners for low ability people and/or differential ability within a household.

Gory details of income variable creation in Appendix 2 at http://www.bls.gov/nls/79quex/r19/y79r19cbksup.htm
but I found it hard to extract useful insight from that.

If the variable plotted is family income then one has to apply a further adjustment since some of the income is likely due to the spouse. (Although maybe the husband should get some credit for managing to marry a good earner ...)

By synthesizing data from Charles Murray, with data from the study of mathematically precocious youth, all taken from about the same age and time, and then adjusting for inflation; I was able to show that the correlation between income and IQ is more or less linear for the full range of the data (IQ 75 to IQ 153):

Another good source of data on the IQ-income relationship is the SAT. Although this data is on the test scores of the teenaged children of various income earners, and only the college bound segment thereof, with a few statistical adjustments, you can estimate the IQs of the income earners themselves:

That Nature article is literally laugh-out-loud material. If poverty causes stupidity, the authors of that "study" must have come from the poorest in the land!

It might be wise to look at the science before jumping to conclusions:

Thank you very much.

Can you please point out to me which of the references you posted has evidence that contradicts the claim that poverty has negative impact on cognitive function or brain structures associated with cognitive function?

This one shows some massive gains for low IQ adoptees depending on the SES of the adoptive parents.

"This last figure is very problematic for the "Social Status/Wealth causes IQ" position. It seems to be the other way around: the kids escaping bottom quintile childhoods all experienced poverty, but the ones with higher cognitive ability were more likely to move up."


Its not really problematic because bad environment does not always effect the person experiencing it. Also the kids experiencing poverty don't experience it equally either.

It is interesting, although they didn't track after adolescence. At any rate, don't expect rational argument. This blog attracts quite a few characters who are wedded to the idea of IQ as fixed and immutable.

The Nature paper has some fundamental problems http://drjamesthompson.blogspot.co.uk/2015/03/income-brain-race-and-big-gap.html

Primarily the fourth link which used Genome-wide Complex Trait Analysis to draw conclusions. But if someone faces outright child abuse, then no doubt will that be harmful to development. Whether poverty has the same effect largely depends on how one defines it.

It would appear that lower cognitive function is more likely to cause poverty and not vice versa.

I think "relatively stable over the lifetime of any given individual" would be a more accurate description of the views many are likely to express here.

In cases of real deprivation there are studies claiming a big drop in heritability, although I don't think the subjects were followed to adulthood. (Early gains can be ephemeral.) The PNAS paper I linked to in the post describes a Swedish study where adoption from lowest quintile to highest leads to a gain of ~ 1/3 SD.

There are a good number of people who are fairly smart - at least 115 IQ - who have incomes significantly below their expected potential, because they've chosen careers which aren't very remunerative. Many of them marry people in the same situation, and then raise kids in something close to poverty. It should be possible to study these children to see whether their parents' relative poverty has left them with adult IQs below what one would expect strictly from correlating parental IQs. In fact, it should be very easy, as academia is one of those careers which attracts high-IQ people then doesn't pay them very well. (Many of the arts are similar.)

Has any such study been done?

Let’s approach this study from the adopted boys’ perspectives. Their families’ situations had to be hellishly tragic in order to separate the male siblings and put one of them up for adoption. I didn’t find at what age the separations typically took place, but can you imagine what the adopted child felt?

In a stable family a child is very sensitive to his caregivers’ words, body language, facial expressions, physical touches–to all the things that show him he is loved. From these implicit and overt expressions, a child learns at an early age whether or not he is accepted for who he is.

It’s extremely traumatic for a child to be rejected for who he is. This can happen within a stable family.

Can you imagine what a child in an unstable family realized about acceptance? What he felt as he learned he could not be himself and be loved? How he tried to adapt to meet his caregivers’ needs?

But everything the adopted child did to be accepted by his original caregivers failed. He was rejected by and ejected from the people who were supposed to love him.

Can you imagine how desperate the adopted child would have been in his new environment? What wouldn’t the boy have done to be accepted?

The researchers made a point of cognitive development. But of all of the things that were important to the adopted child, that described his quality of life, does the finding of a higher IQ give even the slightest hint of his reality?

I find it somewhat suspect that the bottom-decile man at 40-50 has $100k in wealth, or that the median man has over $300k. Perhaps assets, but not net worth.

Academia pays worse than the private sector, sure, but I definitely would not say it does not pay well. Although, I guess it depends on the field and also the country. My knowledge is only about mathematics in Germany and the Czech republic (in both countries could the people who do academic research in maths make more money in the same country in private sector, in neither is their wage anywhere near poverty, not even relative poverty in the country). I can imagine that with various social sciences, the situation is less rosy though. My bias tells me that people who do research in those fields also on average tend to be less smart than those in STEM fields...but that is to be disregarded as bias until proven true :)

Hello there, I do believe your web site could be having internet browser compatibility issues. When I take a look at your website in Safari, it looks fine however when opening in Internet Explorer, it has some overlapping issues. I merely wanted to give you a quick heads up! Apart from that, great blog!

Very rapidly this site will be famous among all blogging and site-building people, due to it's nice content