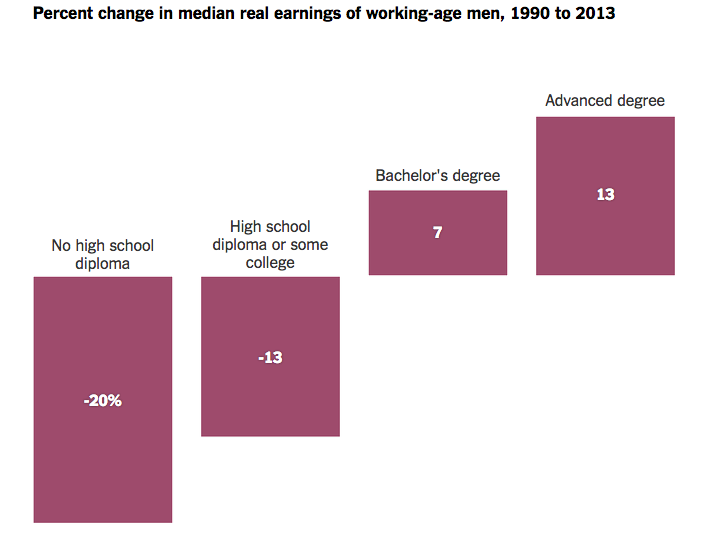 This graphic is from today's NYTimes: Why American Workers Without Much Education Are Being Hammered.

Aside from the human capital (education) point the figure makes, I'm a bit puzzled by the following: real per-capita GDP is probably up at least ~50% (e.g., ~2% x 23 years) over the 1990-2013 period. Where did those gains go? Into the pockets of a small invisible group that doesn't show up in the graph (note use of medians, not averages)? It seems that everyone except the members of this small group were "hammered" over the last two decades ...

Note added (with better data): This source has 2013 GDP at $16 trillion versus $9 trillion in 1990 (both figures in 2009 dollars). Total US population went up 26% (316 million from 249 million). The percentage of the population with college degrees went from about 20% to 30%. It still appears to me that much of GDP increase during the period did not go to workers or ordinary people.

If you annualize any of the real income changes in the graph over 23 years, the change is small -- less than 1% per year. Yet real GDP grew at about 3% per year on average during the period. The graph below (from this 2007 post) might shed some light on the mystery (even the top quintile saw little income appreciation): 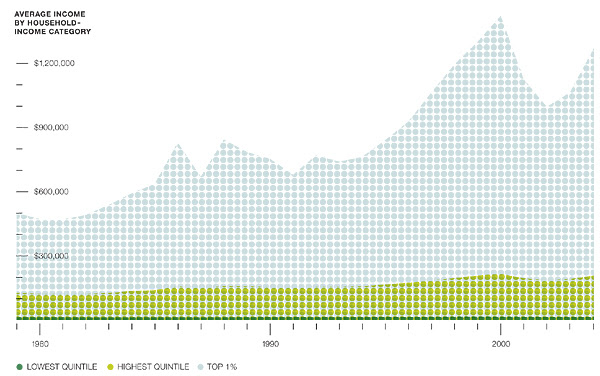 Steve asks: "Where did those gains go?"

Capital gains? "A worker’s annual earnings are the sum of his or her pretax wage and salary income and income from an owned
business or professional practice for the previous calendar year (1990 Census) or previous twelve months (2013 American
Community Survey)."
http://209.240.81.218/files/downloads_and_links/Worker_Profiles_TechnicalAppendix.pdf

I'd recommend the following two papers for some qualifications: 'Deconstructing
income and income inequality measures: A crosswalk from market income to
comprehensive income' by Armour et al. (2013), and 'Inequality, Mobility, and Being Poor in America' by Horwitz (2015).

This finding makes Marxist theory very dangerous one if mass consider to change the pattern. Failed communist contries should serve as reminder.

A fair chunk of the gains probably gets redistributed to owners as dividends and capital gains. As bizwiz21 notes, these are apparently excluded from "annual earnings". Not all those owners are US citizens, not all are male, not all are wage earners, and (per the bar chart on distribution of financial assets) the disbursements to US citizens tend to be concentrated in the top 10% (which I suspect includes both of us). Some of those gains turn into reinvested capital, which benefits someone down the road but perhaps not for a while (as, for instance, with stocks held by a family for the long-term, with the plan to pass them to inheritors).

I agree with AG on Marxists theory and that there is no single communist country that survived. I was linked to your article from http://dating-skills.com