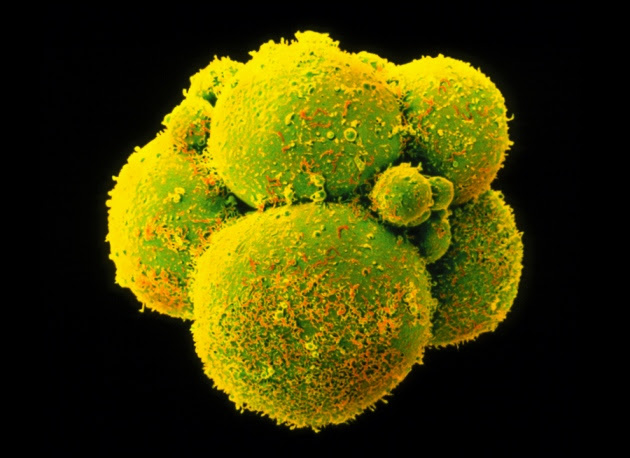 Results such as these had been the subject of rumors for some time. Also covered in Nature News.

It is very early days for this technology -- the off-target rate can probably be reduced significantly using better methods. But in the near term, safety and efficacy issues make PGD a better technique for improving human reproduction. See, e.g., PGD in the US and Israel and Single Cell Sequencing in PGD.

Genome editing tools such as the clustered regularly interspaced short palindromic repeat (CRISPR)-associated system (Cas) have been widely used to modify genes in model systems including animal zygotes and human cells, and hold tremendous promise for both basic research and clinical applications. To date, a serious knowledge gap remains in our understanding of DNA repair mechanisms in human early embryos, and in the efficiency and potential off-target effects of using technologies such as CRISPR/Cas9 in human pre-implantation embryos. In this report, we used tripronuclear (3PN) zygotes to further investigate CRISPR/Cas9-mediated gene editing in human cells. We found that CRISPR/Cas9 could effectively cleave the endogenous β-globin gene (HBB). However, the efficiency of homologous recombination directed repair (HDR) of HBB was low and the edited embryos were mosaic. Off-target cleavage was also apparent in these 3PN zygotes as revealed by the T7E1 assay and whole-exome sequencing. Furthermore, the endogenous delta-globin gene (HBD), which is homologous to HBB, competed with exogenous donor oligos to act as the repair template, leading to untoward mutations. Our data also indicated that repair of the HBB locus in these embryos occurred preferentially through the non-crossover HDR pathway. Taken together, our work highlights the pressing need to further improve the fidelity and specificity of the CRISPR/Cas9 platform, a prerequisite for any clinical applications of CRSIPR/Cas9-mediated editing.

The table below is from the Supplement.

At first I thought PGD was an alternative to CRISPR, that I hadn't heard of yet. But they are actually complementary. Certainly you wouldn't implant an embryo modified by using CRISPR without running PGD.

It seems awfully premature to start work on human cells at this point. I would think it would be more useful to work with mice and slowly increase the number of edits you can make while still achieving nearly 100% success rate. A success being an actual mouse being born without any problems and all of the desired edits intact. Obviously you wouldn't be able to perform 100s of edits on a single egg and not have errors. It would have to include a filtering step after each edit.

Then again, you get the fame of being the first to work on human embryos. For whatever that is worth.

I agree with your comments about PGD, but to what extent would you regard these two technologies as competitors? It seems to me they allow different capabilities with limited overlap. I see the following categories, but would be interested in a more detailed exposition by someone more knowledgeable in this area:

- Avoiding individual recessive mutations (either carrier or homozygous) where both parents are carriers or one is homozygous - either technology. Similarly for targeting heterozygote advantage.
- Maximizing polygenic traits or multiple traits at once. PGD seems more natural for this, perhaps with a tweak from CRISPR.
- Introducing new traits. Only CRISPR. My favorite thought experiment here is restoring vitamin C synthesis in animals that have lost it: http://www.ncbi.nlm.nih.gov/pmc/articles/PMC3145266/

Next Big Future has two posts on new techniques for increasing the accuracy of CRISPR:
"Increasing the accuracy of genome editing" (with an 8-fold increase) The MDC researchers succeeded in increasing the efficiency of the more
precisely working HDR repair system by temporarily inhibiting the most
dominant repair protein of NHEJ, the enzyme DNA Ligase IV. In their
approach they used various inhibitors such as proteins and small
molecules.
and

"Engineered Cas9 Genome-editing protein with 10- to 100-fold increase in specificity". "This study sought to improve the specificity of genome editing by
carefully controlling when Cas9 is active. We engineered a form of Cas9
that is only active in the presence of a harmless, drug-like small
molecule which we provide to the cell," Liu explained. "We showed it's
possible to achieve efficient genome editing using this system, but
because you can stop the production of active Cas9 by withholding the
small molecule once it's had enough time to modify the target genes, you
limit the opportunity for off-target genome modification."

Thanks for sharing these blogs with us! Great resource. Thank you. This is indeed very helpful.
CRISPR/Cas9