Measuring the maximal commuting subset of observables uniquely determines the pure state of a quantum system (recently proved Kadison-Singer Conjecture). More here and here. I guess I always assumed this was true, without knowing it was an (until recently) unproved conjecture! Strange that I learned this at a Microsoft Research meeting :-)

Other stuff: (conference site, with videos)

MSR spends as much as the NSF in support of computer science-related research!

Bill Gates referred to "polymathic individuals who can understand things across multiple boundaries" as important drivers of innovation ;-)

Speech recognition had a big breakthrough in the last few years due to deep neural nets ("beyond shallow HMMs ..."). See this video.

Exponential growth in computing power (Moore's Law, considered more generally than just counting transistors) is in trouble, as predicted from simple considerations of quantum effects and feature size. Even the multi core workaround is running out of steam ("Dennard scaling").

Mac to Windows ratio among participants' laptops roughly 10 to 1. (Ratio moderated a bit by MSR employees ;-) 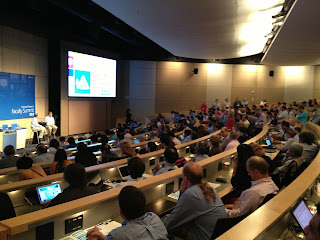 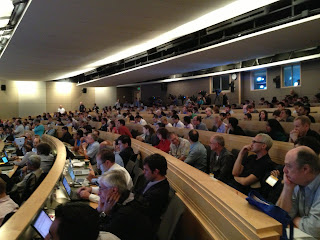 Moore's Law (which is really about transistor density, not computing power) became defunct several years ago, maybe a decade. If it had been in effect during that time, your laptop computer would be operating at 20 to 30 GHz instead of 2 to 3.

I emailed Professor Ng about it and he pointed me to Adam Coates' ICML brief on it. It makes me chuckle, because economically speaking, it is probably $100k infiniband network with the GPU hosts on the ends. The cost of the networking gear probably dwarfs everything else.