This report from the European Council on Foreign Relations aims to give Western readers a sense of the debate about China's future among its policy and intellectual elite. The funny thing about China is that even the elites have no idea where it's going. This is not unrelated to the mini-boom in real estate in large cities on the US west coast and in NYC. On the other hand, one of the economists in the survey writes confidently about continued 8% GDP growth rates and a Chinese economy in 2030 that will be twice as large as that of the US.


[ Mark Leonard: What does the new China think? ] ... The Chinese like to think of history progressing in 30-year cycles. They think of China 1.0 as the years of Mao Zedong, which lasted from 1949 to 1978, when China had a planned economy, a Leninist political system, and a foreign policy of spreading global revolution. China 2.0 was the China that began with Deng Xiaoping in 1978 and spanned a generation until the financial crisis of 2008. Deng’s economic policy – launched under the label of “socialism with Chinese characteristics” – was defined by export-led growth backed up by “financial repression”. Deng’s political agenda was characterised by the quest for stability and elite consensus in the wake of the Tiananmen massacre. And his foreign-policy outlook was about creating a peaceful environment for China’s development by quietly amassing power and keeping a low profile.

Since the global financial meltdown of 2008, China has been facing a crisis of success as each of the three goals of Deng’s era – affluence, stability, and power – is seen as the source of new problems. François Godement has characterised it as a success trap: the incredible achievements of the past have built up a powerful constituency for each of the policies of the Deng era but sticking to them now runs the risk of being self-defeating. Incredible as it might seem, some intellectuals have started to talk of the Hu–Wen era, which delivered an average of 10 percent annual growth, as a “lost decade” because much-needed reforms were not made. China 3.0 will be defined by a quest for solutions to these three crises. 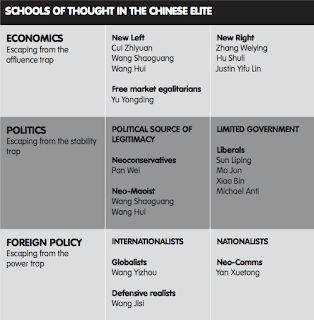 [ Zhao Jing -- "Michael Anti" ] ... smart censorship hasn’t stopped the Chinanet from developing into a genuine public sphere – a “battlefield” for public opinion and a nightmare for some Chinese officials. China’s 300 million microbloggers – equivalent to the entire population of the United States – constitute a powerful force. For example, the authorities’ attempt to cover up a train crash in Wenzhou in southern China in July 2011 caused huge anger among Chinese netizens. In the first five days after the train crash, 10 million people posted criticisms of the government on social media – something that had never happened before in China. This year, the former railways minister was sacked and sentenced to 10 years in prison.

... So why is Chinese social networking booming despite the censorship? Part of the reason is the Chinese language. Posts on Twitter and Twitter clones such as Weibo are limited to 140 characters. In English that comes to about 20 words or a sentence with a short link – in effect, a headline. But in Chinese you can write a whole paragraph or tell a whole story in 140 characters. One Chinese tweet is equal to 3.5 English tweets. In some ways, Weibo (which means “microblog” in Chinese) is more like Facebook than Twitter. As far as the Chinese are concerned, if something is not on Weibo, it does not exist.

The Chinanet is changing the way people in China think and live. It has given the voiceless a channel to make their voices heard. In the past, China had a petition system – a remedy outside the judicial system that allowed ordinary people to bypass corrupt local officials and appeal directly to the central authorities. But if you have a lot of people going to Beijing, it increases the risk of a revolution. In recent years, many people going to Beijing have been sent back or even thrown into black jails. But now we have Weibo – an alternative way for people to petition the government from their mobile phones.

Some of these complaints are picked up by reporters, professors, or celebrities. The most popular microblogger in China, Yao Chen, has about 21 million followers – almost like a national television station. So, despite censorship, Weibo has given 300 million Chinese people a real chance to talk to each other every day. In fact, it’s the first time there has been a real public sphere in China.


See also Is there a China model? (“performance legitimacy”), and these arguments by venture capitalist and PRC apologist Eric X. Li:

1. Adaptability: Political scientists say that one-party systems are incapable of self-correction. Li counters this with the fact that the Party has self-corrected dramatically in the last 64 years, more than any other country in recent memory. The Party’s policies encompassed land collectivization, the Great Leap Forward, the Cultural Revolution, Deng Xiaoping’s market reforms, and Jiang Zemin opening Party membership to private businesspeople — “something unimaginable during Mao’s rule.” And the Party self-corrects in dramatic fashion. New rules get enacted to correct past mistakes, such as term limits with mandatory retirement rates. We also often hear that China is in dire need of political reform, but Li argues this is rhetoric — even if critics don’t see the reform they want to see, political reforms have never stopped. Chinese society is unrecognizable today as compared to 30 years ago. In fact, Li says, “I would venture to suggest that the Party is world’s leading expert in political reform.”

2. Meritocracy Another assumption is that one-party rule leads to a closed political system in which power gets concentrated in the hands of the few, leading to bad governance and corruption. Li argues that actually, the Party is one of the most meritocratic political institutions in the world. Only one fifth of Politburo members come from privileged backgrounds, and in the Central Committee of more than 300, the percentage is even smaller. This is thanks to a body little known to Westerners — the Party’s Organization Department system that guides candidates through integrated career tracks for Chinese officials, recruiting college graduates into entry-level positions and promoting them through the ranks, including high officialdom — a process requiring up to three decades. While patronage plays a role, merit is the underlying driver, says Li. “Within this system,” Li says, “and this is not a put-down – merely a statement of fact: George W. Bush and Barack Obama, before running for president, would not have made small-county chief in China’s system.”

3. Legitimacy Westerners assume that multiparty elections with universal suffrage is the only source of legitimacy. When asked how the Party justifies legitimacy, Li asks, “How about competency?” He cites the fact that since 1949 when the Party took over, China was mired in civil war and foreign aggression, and its average life expectancy was 41. Today, it’s the second largest economy in the world, an industrial powerhouse, and its people live in increasing prosperity. Pew Research polls of public attitudes suggest consistently that citizens are highly satisfied with how the country and nation are progressing. A Financial Times survey recently released suggests that 93% of China’s Generation Y are optimistic about their country’s future. Says Li: “If this isn’t legitimacy, I don’t know what is.” Contrast this, he suggests, to the dismal performance of many electoral democracies around the world: “Governments get elected and then fall below approval a few months later and stay there or fall until the next election. Democracy is becoming a perpetual cycle of ‘elect and regret.’”

Of course, Li concedes the country faces enormous challenges: pollution, population, food safety, and on the political front, corruption, which is widespread and undermines moral legitimacy. But the argument that the one-party system causes corruption doesn’t hold water. According to the Transparency International index of corruption, China has recently ranked between 70 and 80 among 170 countries and moving up, while India, the largest electoral democracy in the world, is at 95 and dropping.

In the spirit of the escalating "trade war" between China and the EU... Usually the bashing is verbal, but as evidenced by the brutal demise of Vincent Chin, sometimes the bashing becomes physical and deadly.

"Outrage after assault on Chinese students in France...

Bloggers in China have reacted with outrage to news of an assault on six Chinese students in France's wine-producing Bordeaux region.

Two people were arrested after the drunken attack, in which one student was seriously injured when a glass bottle hit her face, police say.

Multiculturalism is an experiment, really never tried before in history. The closest was countries such as the Austo-Hungarian Empire or Yugoslavia that yoked several smaller nations together into one. Democracies are the most violent and destructive of human rights because minorities are losers in democracy, they receive less than 50% of the votes. There are lots of out groups in a democracy because the mob decides who is in and out (it's social pressure turned into a governing power), and it varies based on the makeup of the mob in question. Even an ethnically homogenous nation will have out groups. Combined with this myth of equality and poor political structure for diversity that have created a bad setup, is the declining social mood that could continue for quite some time, which will increase conflict. Foreigners all over the globe should strive to assimilate as much as possible, the next 10 to 20 years will demand it, but everyone (including all the natives) in a nation such as America should be cautious. Being French or Chinese didn't protect one from the French or Cultural Revolutions.

I think democracy, i.e. being able to elect leaders, is often conflated with civil liberties. For the most part, the Chinese leadership has been relatively competent post-Mao at addressing pressing issues. I don't see the democratic electoral system as being necessarily relevant to the Chinese model of development.

What I'm more concerned about is freedom of expression. People should be allowed to say what they want, short of shouting fire in a crowded theater. I'm fine with a highly competent regime running things, as long as they tolerate dissenting opinions. If someone doesn't believe the current regime is the best form of governance, even if there's empirical evidence suggesting otherwise, surely sending them to a labor camp for 10 years isn't the right approach.

You also have people who push too hard exposing scandals and running afoul of the government. The Chinese government cracks down on those individuals, but as far as I can tell also punishes the people who were responsible for the scandal, so it's harder to say unequivocally that the government is entirely in the wrong there.

If you're a Scandinavian, cheers. You've gone from human sacrifice to the best countries in the world in 2000 years.

But you're the best because of Blut und Boden not ideologie.


The Nazis were so wrong and so right simultaneously.

The US really isn't worth typing about Yan.

Multi-culti, multi-ethnic, multi-whatever, just doesn't work. It would be nice if it did, it would, but it doesn't.

The TRUTH is horrible.

Brazil is the country of the future and always will be, until the US becomes Brazil.

Yan the US is NOT a democracy.


In general democracy is impossible with voting. Only a vanguard of the proletariat or the people can deliver democracy, and, so far, those who've claimed to be such haven't.


BUT the life expectancy for a Cuban male is greater than that of an American male.


Christianity still has an influence. Even though self-identifying Christians may be a minority, the West is still "post-Christian".

Our STEM graduate programs have many Chinese students. In some departments and disciplines they are a near or actual majority. They spend anywhere from two to six or mores years immersed in our culture. Then most of them go home. Are there any studies on what they do when they get back home? How do they affect the people around them or the politics of the elite?