All that is left is the wind in the pines 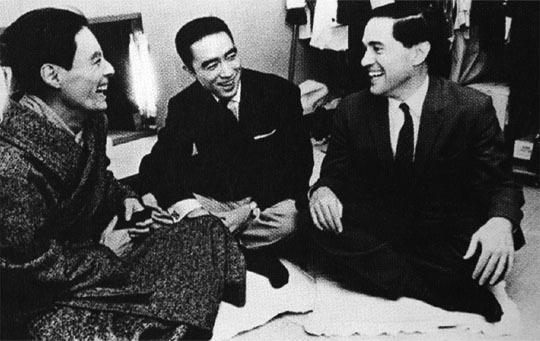 The FT's Asia editor has lunch with Japan scholar Donald Keene (shown above with Yukio Mishima and Hiroshi Akutagawa). Keene has a keen intelligence and fine literary and historical sensibilities. He recently became a Japanese citizen at the age of 89. I highly recommend his memoir Chronicles of My Life: An American in the Heart of Japan. See also Japanese Diaries and Yukio Mishima. (Via Gwern.)


Financial Times: ... I steer Keene back more than 70 years to when, as an 18-year-old, he came across a translation of The Tale of Genji in the Astor Hotel in New York. At the time, Keene was studying French and Greek literature at Columbia University, having won a scholarship to study there at the age of 16. He bought the book because, at 59 cents, the epic story, written 1,100 years ago, contained more words per dollar than any book in the store. That was how the love affair began.

... “He was an extraordinary person,” says Keene, who knew Mishima well. They had met, symbolically enough, outside Tokyo’s Kabuki-za theatre in 1954, and had gone to see plays together. Keene had translated one of Mishima’s modern Noh plays.

“He died, as you know, at the age of 45, leaving at least 45 stacked volumes of novels, plays, criticism, poetry.” Mishima slit his belly after leading a failed, and farcical, coup to restore the emperor’s power but Keene thinks he committed suicide because he was passed over for the Nobel Prize. During the 1964 Tokyo Olympics, Mishima had written Keene a letter with the line, “I envy the athletes who know if they are first, second or third.” Keene says: “That was all he said but I knew exactly what he meant.” The irony was that Kawabata, who did win the Nobel Prize, also committed suicide because of the pressure of living up to his new reputation.

As our coffee arrives, I mention the writer Jun Takami (1907-1965), one of whose plays ends with the line, “All that is left is the wind in the pines.” Keene gives me an ecstatic look. “Yes, it’s the most marvellous end to any play. There’s nothing on the stage at all, nothing but the pine.” He shakes his head at the sadness and the beauty. “Oh, what a stroke of genius that was. I think of it now and I’ve got shivers going down my spine.”

Keene is in a kind of reverie by now, lost in the personal and literary wanderings of a lifetime. “I knew Takami Jun,” he says, using the Japanese name order. “He was a very elegant man. The last time I saw him, he was wearing a white suit and he was surrounded by about seven or eight young women. And he was smiling.” Keene’s eyes are moist. He is staring past me or through me. The restaurant is still quite empty but Keene has flooded it with the memories of people, mostly long dead. He stands to leave and is helped up the narrow stairs to the city above. Down in the basement, I am left at the empty table. There is nothing, not even the wind in the pines.

Paul Theroux has the Japanese pegged.

I remember my one Japanese lit class. The Japanese are, agreeing with Theroux. a nation of pervs.

Comedy is a lot harder than drama, and ALWAYS more true.

I'm hardly a racist. It's just an unfortunate FACT of this fallen world that the rest has very little or nothing to offer the West.

Comedy is harder indeed, that's why most people do it so poorly. Your wrong of course that it's ALWAYS truer, it depends on what's being said. Nobody called you a racist -- very defensive aren't we? I agree that the West has much to offer, but other cultures aren't all and wholly as bad as you seem to believe.