Not only do these results implicate common causal variants as the source of heritability in disease susceptibility, but they also suggest that gene-gene (epistasis) and gene-environment interactions are of limited impact. Both the genetic and environmental backgrounds for a particular allele vary across Eurasia, so replicability puts an upper limit on their influence. See also Epistasis vs Additivty.

Genome-wide association studies (GWAS) have detected many disease associations. However, the reported variants tend to explain small fractions of risk, and there are doubts about issues such as the portability of findings over different ethnic groups or the relative roles of rare versus common variants in the genetic architecture of complex disease. Studying the degree of sharing of disease-associated variants across populations can help in solving these issues. We present a comprehensive survey of GWAS replicability across 28 diseases. Most loci and SNPs discovered in Europeans for these conditions have been extensively replicated using peoples of European and East Asian ancestry, while the replication with individuals of African ancestry is much less common. We found a strong and significant correlation of Odds Ratios across Europeans and East Asians, indicating that underlying causal variants are common and shared between the two ancestries. Moreover, SNPs that failed to replicate in East Asians map into genomic regions where Linkage Disequilibrium patterns differ significantly between populations. Finally, we observed that GWAS with larger sample sizes have detected variants with weaker effects rather than with lower frequencies. Our results indicate that most GWAS results are due to common variants. In addition, the sharing of disease alleles and the high correlation in their effect sizes suggest that most of the underlying causal variants are shared between Europeans and East Asians and that they tend to map close to the associated marker SNPs.

Figure 7 from the paper shows the strong correlation (with slope = 1) between odds ratios in East Asian and European discovery samples. (Click for larger version.) 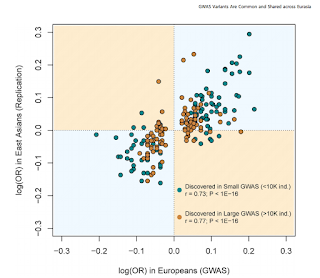 
A Defense of Beanbag Genetics

My friend Professor Ernst Mayr, of Harvard University, in his recent book Animal Species and Evolution1, which I find admirable, though I disagree with quite a lot of it, has the following sentences on page 263.


The Mendelian was apt to compare the genetic contents of a population to a bag full of colored beans. Mutation was the exchange of one kind of bean for another. This conceptualization has been referred to as “beanbag genetics”. Work in population and developmental genetics has shown, however, that the thinking of beanbag genetics is in many ways quite misleading. To consider genes as independent units is meaningless from the physiological as well as the evolutionary viewpoint.

... In another place2 Mayr made a more specific challenge. He stated that Fisher, Wright, and I “have worked out an impressive mathematical theory of genetical variaion and evolutionary change. But what, precisely, has been the contribution of this mathematical school to evolutionary theory, if I may be permitted to ask such a provocative question?” “However,” he continued in the next paragraph, “I should perhaps leave it to Fisher, Wright, and Haldane to point out what they consider their major contributions.” While Mayr may certainly ask this question, I may not answer it at Cold Spring Harbor, as I have been officially informed that I am ineligible for a visa for entering the United States†. Fisher is dead, but when alive preferred attack to defense. Wright is one of the gentlest men I have ever met, and if he defends himself, will not counterattack. This leaves me to hold the fort, and that by writing rather than speech.

Now, in the first place I deny that the mathematical theory of population genetics is at all impressive, at least to a mathematician. On the contrary, Wright, Fisher, and I all made simplifying assumptions which allowed us to pose problems soluble by the elementary mathematics at our disposal, and even then did not always fully solve the simple problems we set ourselves. Our mathematics may impress zoologists but do not greatly impress mathematicians. Let me give a simple example. ...

For those eagerly awaiting data from the BGI study this GWAS overview might be an interesting read: http://www.ploscompbiol.org/article/fetchObject.action?uri=info%3Adoi%2F10.1371%2Fjournal.pcbi.1002822&representation=PDF

Steve, you might find figure 1 discussing effect size vs. allele frequency useful for illustrating the points you make about what you are expecting there (though I'm not sure the effect size metrics.are the same for disease and quantitative traits--any comments?).

I couldn't help but read all of Haldane's response and noticed this in a footnote: "However, I am not permitted to lecture in North Carolina, and perhaps in other states, without answering a question which I refuse to answer. Legislation to this effect does not, in my opinion, help American science."

Does anyone know to what legislation he referring?

I suspect he is referring to an anti-communist "loyalty oath" required at the time.

"Are you, or have you ever been, a member of the Communist Party?" :-)