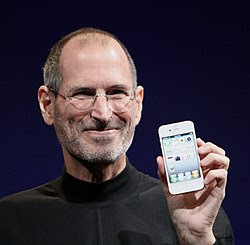 “Being the richest man in the cemetery doesn’t matter to me … Going to bed at night saying we’ve done something wonderful… that’s what matters to me.” [The Wall Street Journal, May 25, 1993]

“Remembering that I’ll be dead soon is the most important tool I’ve ever encountered to help me make the big choices in life. Because almost everything — all external expectations, all pride, all fear of embarrassment or failure — these things just fall away in the face of death, leaving only what is truly important. Remembering that you are going to die is the best way I know to avoid the trap of thinking you have something to lose. You are already naked. There is no reason not to follow your heart.” [Stanford commencement speech, June 2005]

“Your time is limited, so don’t waste it living someone else’s life. Don’t be trapped by dogma — which is living with the results of other people’s thinking. Don’t let the noise of others’ opinions drown out your own inner voice. And most important, have the courage to follow your heart and intuition. They somehow already know what you truly want to become. Everything else is secondary.” [Stanford commencement speech, June 2005]

Lest everyone believe Jobs was some sort of an enlightened angel brought upon mother Earth to save the humanity from flawed gadgetry, here's what Charles H. Ferguson had to say about him in "High Stakes, No Prisoners", in a chapter titled "The protection - and screwing of - employees" (granted, he said similarly nasty things about pretty much everyone except himself):

"Jobs reorganized the company [Pixar], selling off a money-losing hardware business to focus on software. Then Jobs pulled a neat trick. "Old" Pixar was shutt down and all of its shares sold to "New" Pixar, which Jobs created solely for this purpose. The paperwork was easy. The controlling shareholder of Old Pixar and the controlling shareholder of New Pixar, both of whom happened to be Steve Jobs, simply voted the deal through.

As part of the reorganization, Jobs exercised a clause in the employee stock option agreements that allowed him to buy back their options at the original strike price, which was a pittance. Peter Amstein had worked at Pixar, and all he knew was that one day he had stock options, and the next day he didn't. During the public offering, the underwriters forced Jobs to distribute about 15 percent of the stock among key employees, because nobody would have invested otherwise. Smith was allowed to buy a small allocation of stock at Catmull's insistence, but many employees were shut out entirely, including some who had spent many years creating the technology. If you look at Pixar's web site now, you'd never guess the company existed before Jobs got there."

For me, Apple has always reeked of bs, and Jobs was the lead spin-doctor/cult leader/brainwasher persona. Pompous speeches about the importance of unconstrained self-love fit very well into the picture, and it is no surprise that they meet positive response by those enamored with the so-called "American dream". If you've had some amount of success, it's so satisfying to nod your head in agreement about the "wisdom" of this brilliant speaker, and attribute your fate to being just as "smart". But for every Jobs who has made it, there are a thousand more who followed the simplistic advice, tried oh-so-hard, failed terribly, while doing harm to other people along the way, and finally disappeared from view, disenchanted. What's more there are millions more who have not ever had any chance of trying, because of their circumstances. Of course, you won't see all those politically incorrect poor suckers anywhere in the headlines.

I have much more sympathy for a rich man who can admit that there were external factors to his success rather than a narcissist who gives us teary stories about his difficult childhood and the "power of belief" which paved his way to greatness.

Recent hagiography aside it’s no secret that Jobs at times could be an imperious asshole who brought colleagues and associates to tears when they failed to perform to his exacting expectations. There are two sides to most coins I have seen. Maybe three if thick enough. Just as there are in technological game changers and many visionaries. It’s likely Jobs will be canonized anyway.

Thomas Edison was known to be a similar sort of tyrant (much worse than Jobs) and when things didn’t go his way he raised holy hell and exacted revenge. He likely wanted to drive 2,500 amps through Nicola Tesla’s writhing body during their AC/DC current war- ultimately won by Tesla’s and Westinghouse’s AC, much to Edison’s chagrin.

Call it ressentiment, but wasn't Jobs just a marketing whiz. I for one never ever had any desire to buy any of his i-crap.

"The paths of glory lead but to the grave..."

Developing intuition- Why it is
important?


Many great thinkers have emphasized
the significance of intuition along with its great impacts on their
professional and personal lives. Many define it as 'a priori' knowledge. It is
indispensable and essential tool for us.