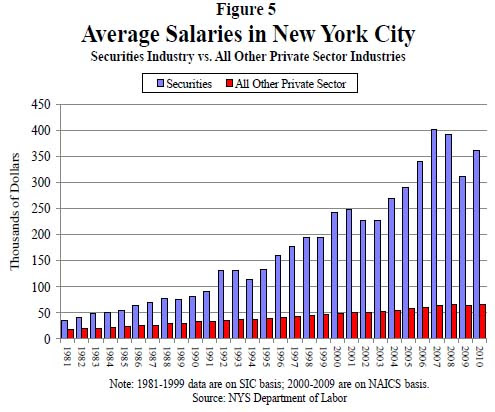 Does this include secretaries? See Manhattan on $500k a year.
Posted by Steve Hsu at 6:43 PM

I don't get it. Don't investors know that inactively managed funds (e.g. index funds) tend to have higher rates of return than actively managed funds? It also seems to me that money management is a real easy sector to outsource. & if people do want to have their funds managed, I'm surprised people aren't willing to utilize cheap (relatively) money management sources in India, China, or Russia. Of course, the reason why guys like Soros (convicted in 2002 of insider trading) spend a lot of time in NYC is because they can get inside info....

Note that by "average" salary they mean "mean total compensation" rather than median.  So what does it matter if secretaries are included or not?
One banker making $10mm with 25 minions making $zero averages $400k.
Joe Blow working in securities sure ain't gettin' no $500k per year to "scrape by" in Manhattan.

Mean vs median matters a lot.

Ha, ha---It's been many years, but I think that Tale of Two Cities opened with a description of the suffering of the less wealthy nobles who had to get by with a mere five body servants when all their friends had an even dozen.

Offhand, it looks like the overwhelming bulk of the estimated after-tax expense in the NYT article comes from the costs of co-op mortgage and maintenance plus private school.

What the stupid writer doesn't seem to recognize is that these are clearly positional goods, priced by a bidding competition.  If all the senior execs doubled their salaries, these costs would basically double as well, since all the bidders would have more money to spend.  Contrariwise, if all the execs had their salaries capped by the government or smarter shareholders, their costs would go down.  To a lesser extent, their other major costs, such as the salaries of their various servants and retainers, are also determined by this same ability to pay.

Basically, these wealthy parasites in NYC could be given control of 99% of all of America's wealth---which is pretty much what's now happening---and they'd still be complaining to the NYT guy about how they lived paycheck-to-paycheck because their fancy NYC apartments would then cost a billion dollars each.

Even throughout the "Greed is Good" 80s the avg. barely went over 75k. Interesting spikes in '92 and again in '04, coinciding with the first Gulf War and OIF; war as a stimulus plan?

The best I've seen advertised is $300k for a computer gizmo-guy like me.  I imagine anything beyond that is from 'equity' [if that is even the right word] in the prop desk syndicate.  Most jobs are for ~$150k-$225k, which I could make a dozen different ways if I wanted to work New York hours.

Hey, you need to be compensated for being the monkey who sells out of the money puts and buy dividends.