I was never enamored of his fiction (I've read more biographies of Mishima than novels by him), but Yukio Mishima lived one of the most fascinating lives of the mid 20th century, culminating in his suicide:


With a prepared manifesto and banner listing their demands, Mishima stepped onto the balcony to address the soldiers gathered below. His speech was intended to inspire a coup d'état restoring the powers of the emperor. He succeeded only in irritating them, however, and was mocked and jeered. He finished his planned speech after a few minutes, returned to the commandant's office and committed seppuku.

I was surprised to find this video with Mishima speaking English. I had thought his English rudimentary, but it's actually quite good. 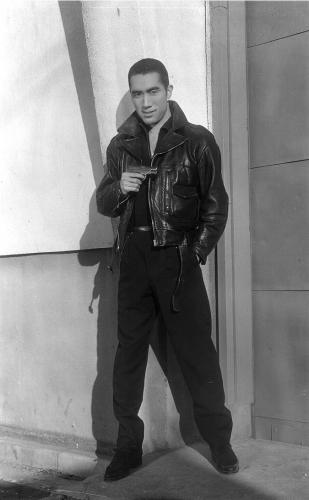 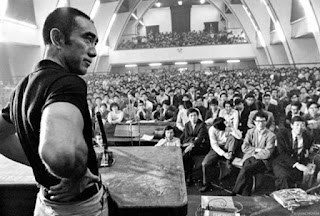 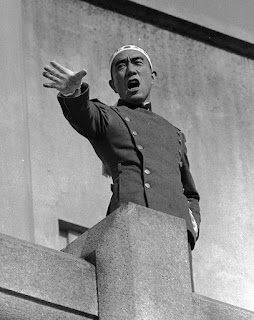 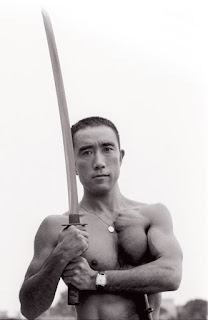 Barney Frank's the only one on the left I can name.

I don't agree, Steve. Mishima was all about himself, which is why he killed...himself. His odd world-view was more like an Aesthetic Construction. This Breivik might well be Psychotic. If he is, it isn't any more helpful to try & shift the blame, should there be any, to Marx as opposed to a Conservative Christian Agenda of any sort. The only thing for certain, so far, is that some people do like to jump to conclusions & play politics with a tragedy like this. This happens just as the day follows night, and/or vice versa. It would be nice if this were to stop, but, apparently, some people find the opportunity to be heard more important than propriety and decency.

"It would be nice if this were to stop, but, apparently, some people find
the opportunity to be heard more important than propriety and decency."

He's not a white nationalist. Breivik was known to write at white nationalist sites but he argued against white nationalism and tried to convert WNs to his anti-racist far-right ideology. There are basically no white nationalists in Europe and Breivik writes about this a lot in his manifesto, about how American right-wing thought is a laughing stock in Europe since Americans talk about race all the time and continental Europeans simply aren't interested in "white" issues.

And for the record, I'm "far-right" and similarily "anti-racist". Not because I'm a big believer in racism being the worst of all evils or whatever but because racial politics just won't work in Europe. White nationalists will never be more popular than ufologists or the "god hates fags" church. (Actually, I think ufo believers get considered less kooky than white nationalists...) I mostly agree with Breivik's reasoning and it's not white nationalist reasoning.

Ummm... you´re joking, right? They are virtually 100% left. The Nazis only attracted them because of the irresistible fancy-dress; the Nazi uniforms were one big Mardi Gras.

Breivik's expression of his racial hatred was more sophisticated, certainly, than an attack directed only at representatives of alien ethnic groups would have been, but I don't see any evidence that his actions had some other motivation.

I like this quote: "I've read more biographies of Mishima than novels by him".
Often I enjoy secondary literature more than the orginal works :-)

To me his life is more interesting than his art.

On the other hand, Fortuyn wasn't an extremist by any reasonable standard, so he shouldn't be grouped with them.

P.J. O'Rourke said that nobody ever paid to have sex with somebody dressed as a Communist.

On the internet, sure. The difference there is that Breivik's opinions on multiculturalism and immigration are pretty much ordinary stuff that you regularily run into in any pub, family reunion, workplace etc and half the people will agree with it but white nationalism is something no one talks about outside of the few rare skinhead hangouts. Breivik is actually hardly an "extremist" on that: the extreme part is how viciously he views the left, his opinions on minorities are pretty average.

As for the gene thing, Europeans and Americans tend to see it opposite ways. If a black and a white American have kid, in American categories the kid is still simply black and white America will view the black kid as completely "unrelated", not part of the tribe. If an African and a Norwegian have a kid and he grows up in Norway, pretty much everyone will just see the kid as a Norwegian with partly exotic ancestry; being part-Norwegian makes him "related" enough to get into the tribe. For Americans, one drop of the exotic means you're probably out of the mainstream ethnicity, for Europeans, one drop of the familiar means you're probably in the mainstream ethnicity.

The problem is that right now is that we're getting minorities that refuse to intermarry and mix with the mainstream and our politicians keep insisting that we should accept them as members of the tribe when it goes against all European instincts.

"Steve Sailer would characterize himself as an anti-racist, yet the majority of his posts involve nothing more than griping about Jews and East Asians or ridiculing blacks and Hispanics."

You are projecting there again, Yan Shen. For example, Sailer rarely writes about East Asians, you only think he does because that's the only thing you personally care about. The only group that he could be said to "gripe" about is Hispanics, but it's hardly surprising that a Californian would do that. What I like about his blog is precisely that he talks about such varied topics. For example, if you look at the front page of his blog, there are currently posts about environmentalism, Larry David and free-verse poetry, the debt ceiling imbroglio, "The Guard" (a movie), hypoallergenic dogs, a would-be Muslim terrorist in Texas, Breivik, barbarism in Afghanistan, Hispanic leaders, race and medicine, "Babies" (a documentary), IQ heritability, a Mexican labor union leader, disparate impact, the plunge for distance (!), Rick Sanchez, chimpanzee intelligence, and women programmers. There is, alas, not a single post about East Asians, but otherwise if you think that he does not have varied interests, your standards are not reasonable. If you want to know what a monomaniac looks like, I suggest you look at your own commenting history.

"The only group that he could be said to "gripe" about is Hispanics, but it's hardly surprising that a Californian would do that."

Uh no, it's alarming and extremely anti-social to see a bunch of posts where he's more or less ridiculing the low intelligence of Hispanics. Of course, it's not surprising that a bigot like you has no problem that.