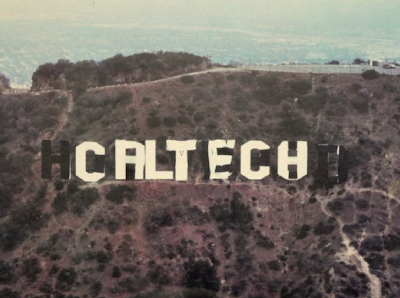 My Ditch Day stack was an honor stack: the underclassmen only got access to the room if they could accomplish the assigned task, to change the Hollywood sign to read CALTECH. Unfortunately, one of the students working on the stack did an interview with a local TV reporter, describing their plans. This reporter called the Hollywood police for comment, which led to the underclassmen being met at the sign by a police unit. The task was not carried out until the following academic year -- I received a postcard with the picture above after I had already started grad school :-)

One of the oldest Caltech traditions is Ditch Day. Sometime during the 1920s, seniors longing for a break decided to give themselves a day off. Abandoning classes and schoolwork, they collectively vanished from campus.

This became an annual tradition, and eventually underclassmen (from whom the date of the event was kept secret until the day itself) took to "modifying" seniors' rooms while they were gone. Over the years, rooms have been filled with sand, Styrofoam, a disassembled-and-reassembled car, and a functioning cement mixer, among many other items; and furniture has been glued to ceilings, moved into courtyards, and suspended from trees.

Hoping to frustrate these modifications, seniors took to stacking cement blocks in front of their doorways before leaving campus. Over the years, these "stacks" evolved into complex, imaginative puzzles that are carefully planned out for months or even years in advance in order to occupy the underclassmen throughout the day.

Wow, I didn't know that you were part of the Hollywood sign stack.  That was one of the famous ones we all aspired to. :)

That just makes it even better!