In an earlier post I discussed the population history uncovered by Gregory Clark in his book A Farewell to Alms. By examining British wills, he showed that the rich literally replaced (outreproduced) the poor over a period of several centuries. 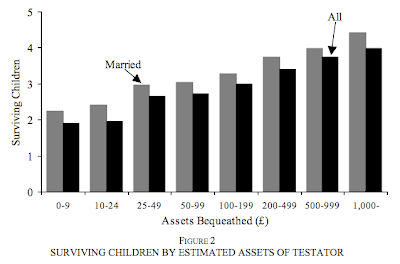 The excerpt below is from a review of Greg Clark's book. The review is mostly negative about Clark's big picture conclusions, but does provide some interesting historical information. Note, the reviewer does not seem to understand population genetics (see discussion further below).


The comparison of Beijing nobility and Liaoning peasants is drawn from Lee and Wang’s (1999) survey of Chinese demography, which, in turn, is based on a very detailed investigation of population in Liaoning by Lee and Campbell (1997). In Liaoning, all men had military obligations and were enumerated in the so-called banner roles, which described their families in detail. Individuals’ occupations were also noted, so that fertility can be compared across occupational groups. High status, high income occupations had the most surviving sons: for instance, soldiers aged 46–50 had on average 2.57 surviving sons, artisans had 2.42 sons, and officials had 2.17 sons. In contrast, men aged 46–50 who were commoners had only 1.55 sons on average.


The references cited are


So we have at least two documented cases of the descendants of the rich replacing the poor over an extended period of time. My guess is that this kind of population dynamics was quite common in the past. (Today we see the opposite pattern!) Could this type of natural selection lead to changes in quantitative, heritable traits over a relatively short period of time?

Consider the following simple model, where X is a heritable trait such as intelligence or conscientiousness or even height. Suppose that X has narrow sense heritability of one half. Divide the population into 3 groups:

Suppose that Group 3 has a reproductive rate which is 10% higher than Group 2, whereas Group 1 reproduces at a 10% lower rate than Group 2. A relatively weak correlation between X and material wealth could produce this effect, given the demographic data above (the rich outreproduced the poor almost 2 to 1!). Now we can calculate the change in population mean for X over a single generation. In units of SDs, the mean changes by roughly 1/6 ( .1 + .1) 1/2 or about .02 SD. (I assumed assortative mating by group.) Thus it would take roughly 50 generations, or 1k years, under such conditions for the population to experience a 1 SD shift in X.

If you weaken the correlation between X and reproduction rate, or relax the assortative mating assumption, you get a longer timescale. But it's certainly plausible that 10,000 years is more than enough for this kind of evolution. For example, we might expect that the advent of agriculture over such timescales changed humans significantly from their previous hunter gatherer ancestors.

This model is overly simple, and the assumptions are speculative. Nevertheless, it addresses some deep questions about human evolution: How fast did it happen? How different are we from humans who lived a few or ten thousand years ago? Did different populations experience different selection pressures? Amazingly, we may be able to answer some of these questions in the near future.

Thanks to Henry Harpending for reminding me about the Chinese data and about the question of fastest plausible evolution for a quantitative trait.
Posted by Steve Hsu at 5:53 PM

Someone in the past century must have modeled the time-evolution of the IQ distribution of a certain population using something like the Fokker-Planck equation. Would anyone be so kind to share references? Thanks in advance.

You should have read the review attentively. It does a good job of pointing out several of Clark's absurd and ignorant statements.

Female infanticide was not widely practiced in premodern China (Duol Kim), so commoners had 3 surviving children in average while soldiers about 5. These figures imply too high a population growth rate for the place and the time.

BTW, just saying your example of Liaoning demography was more Manchu demography than Chinese demography. There's no such things as Banner classification except for the Manchu in Manchuria.

"This model is overly simple, and the assumptions are speculative"
keep in mind that history always evolves with constant disturbance from other groups of people. The rich would not stay rich forever, so does the intelligent ones. E.g. in China there was constant alternation of regimes that came from the northern steppe invasion. Every turn of political swift due to nomadic invasion (including your Liaoning case, the Manchu invasion) new nobility were established, and old Chinese nobility were usually the first target to be persecuted. The new Banner prince may be not as smart as Chinese aristocrats but definitely got more fighting skills than the latter one to take over the power and ensure their sons survive better than others.

Sure, but the question is whether there was some sustained period during which, on average, the correlation between X and reproductive rate was positive. It's not implausible to me that over thousands of years you can get a 1 SD change.

It's possible this is just some subpopulation, i.e., Manchus, who were undergoing population growth during the period. Some other groups (like subjugated Han) might have shrinking population over the same period. I'm not an expert on Chinese history; IIRC you can find some of the references on Google books if you are interested.

I don't agree with everything Clark says. What's most interesting to me is the demographic history he uncovered. But IIRC the reviewer clearly doesn't understand population genetics.

Thanks! I should have checked my estimate (I knew it was a lower bound on the rate of increase) but I was too lazy :-)

I do think it's plausible that genetic IQ has increased by 1 SD in the last 10,000 years (because of agriculture).  I've noticed that populations that have practiced agriculture score 15 IQ points higher than tribes within their same gene pool who are hunter gatherers though I could have the cause and effect backwards.

There's a published theory that the rich outbreed the poor until civilization thrives and once the society becomes rich and prosperous, the low IQ people breed at higher numbers which causes the society to crumble.  This is thought to explain the rise and fall of civilizations.  This might explain why humans have not been getting much smarter (genetically); whatever genetic gains are made are then reversed in a repeating cycle.

There's also a theory that the great Elizabethan renaissance which allowed the West to become dominant was caused by the Black Death which disproportionately removed the poor from the gene pool, and only recently has the West been reverting back to its natural genetic level.

Oops, did you leave out the .5 additive heritability? That may be why your answer is a bit more than twice my estimate (lower bound).

I hadn't folded in the heritability: pick your favorite.  Your estimate is not bad, I just happened to have a similar script around.

Wealth selection must have happened in a number of places. It may well have had a significant effect in China.  On the other hand,  you see very similar IQs in Japan and  Korea, whose history is not the same.  In particular, I see no sign of anything like the imperial exam system in Japan - but then I never much believed in that notion anyhow, because, although meritocratic, the fraction of winners was extremely small.  The numbers work a lot better with wealth selection

So maybe wealth selection operated in all three countries, or maybe those IQs result from earlier events, or maybe both.

The problem is fairly complicated - you need to look at a number of historical/demographic factors .  But  these simple examples show that it is not hard to have changes of one std or so over a thousand years if the stars so align. If we're talking adaptations to being a farmer rather than a hunter gatherer -  which means many kinds of changes, immunological & metabolic & psychological/cognitive - there is as much as 10,000 years available in which selection could have acted, in the places where agriculture first began.   Basically, any time that some human population makes a major change in lifestyle, adaptive change ensues.  You may start out as people who happen to farm, but after a couple of thousand years you're farmers - changed.  For that matter, when people switched from thrusting spears to atlatls, they soon turned into atlatlists.

In principle  social scientists should be  aware of this, since it means that humans have surely changed in body and mind  over recorded history - and must logically also vary from places to place, since the selective factors over the Holocene have been very different in different places.  The fact that we see such differences every day, that every psychometric study shows them, if anything makes it even harder for them to accept this. Fisher complained about it: "I know of no historian who knows what Natural Selection means. "
Still the case.  Learning much about it would be mathematically burdensome for many social scientists, but the main problem is that they don't want to hear it.

Also don't forget the maxim that "without data you are just another dork with an opinion".  Like his opinions or not, Clark did serious work to put before us some data.  We all suspect that his data indicate reproductive patterns that are not seen in modern western society.  But is that true?  I dunno.

Fisher was probably right that historians didn't understand natural selection very well.  Maybe he should have explained it in terms of what happened to a non-conformist who wanted to study history at Cambridge before the repeal of the Test Act.  Maybe only ambiguously 'natural', but definitely a selection pressure.

"(Today we see the opposite pattern!)"

In 1990 this would have been correct.  But, since then, fertility for wealthy women has increased due to fertility treatments and the fertility of poor women has declined for a variety of more cryptic reasons, including a major decline in teenage pregnancy rates.  Among non-immigrant women, the number of children per woman per lifetime in the United States is lower for the poor than for the wealthy.

The general formalism is basic population genetics (lots of good textbooks, e.g. Lynch and Walsh), probably first worked out by Fisher. I don't know of any detailed work on IQ per se. The best treatment of fast human evolution (albeit a popular exposition rather than a technical one) is of course Cochran and Harpending's book The 10,000 Year Explosion :-)