With Pascin at the Dôme

I always wondered who Hemingway had in mind as the dark sister when he wrote the short story With Pascin at the Dôme, which appeared in the collection A Moveable Feast. According to the article Who Was With Pascin at the Dôme?, it was the model Bronia Perlmutter (on the left, below). The early 20th century precursor to Natalie Portman?

Disappointingly, literary muses seldom live up to their fictional depictions. I guess it's because very few struggling writers have good Game ;-) Even the women Hemingway hung around with don't seem exceptionally beautiful.. 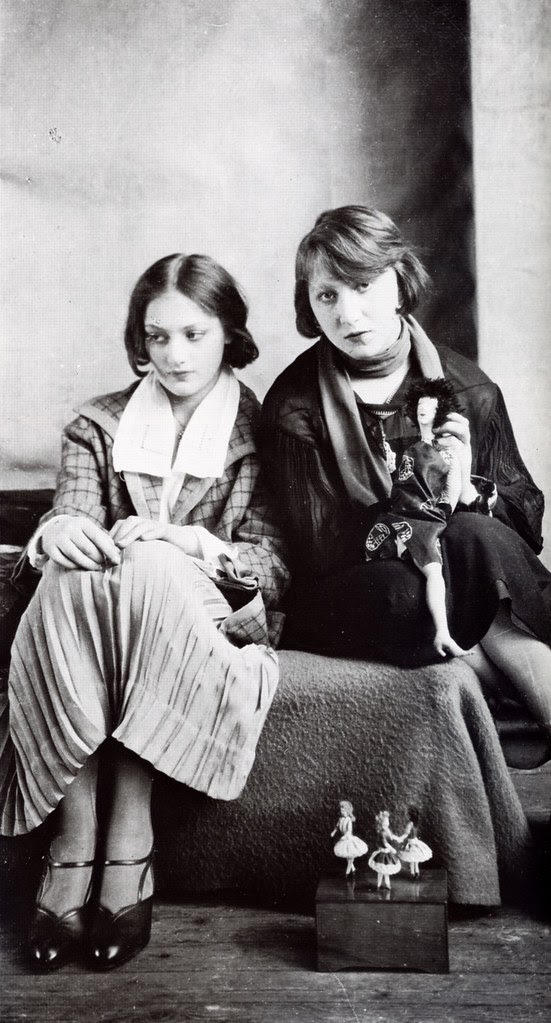 With Pascin at the Dôme: ... i went over and sat down at a table with pascin and two models who were sisters. pascin had waved to me while i had stood on the sidewalk on the rue delambre side wondering whether to stop and have a drink or not. pascin was a very good painter and he was drunk; steady, purposefully drunk and making good sense. the two models were young and pretty. one was very dark, small, beautifully built with a falsely fragile depravity. the other was childlike and dull but very pretty in a perishable childish way. she was not as well built as her sister, but neither was anyone else that spring.

'the good and the bad sisters,' pascin said. 'i have money. what will you drink?' 'une demi-blonde,'i said to the waiter. 'have a whisky. i have money.'

'if you really liked beer, you'd be at lipp's. i suppose you've been working.'

'do you want to bang her?' he looked towards the dark sister and smiled. 'she needs it.'

'you probably banged her enough today.'

'you can take her over to the studio.'

'who spoke to you?' pascin asked her.

'let's be comfortable,' pascin said. 'the serious young writer and the friendly wise old painter and the two beautiful young girls with all of life before them.' we sat there and the girls sipped at their drinks and pascin drank another fine a l'eau and i drank the beer; but no one was comfortable except pascin. the dark girl was restless and she sat on display turning her profile and letting the light strike the concave planes of her face and showing me her breasts under the hold of the black sweater. her hair was cropped short and was sleek and dark as an oriental's. 'you've posed all day,' pascin said to her. 'do you have to model that sweater now at the cafe?'

'not the eyes,' she said. 'it's more complicated than that.'

'you didn't have any today?'

'oh that,' she said and turned to catch the last evening light on her face. 'you were just excited about your work. he's in love with canvases,' she said to me. 'there always some kind of dirtiness.'

'you want me to paint you and pay you and bang you to keep my head clear, and be in love with you too,' pascin said. 'you poor little doll.'

'but you're too big,' she said sadly.

'everyone is the same size in bed.'

'look,' pascin said. 'if you think i'm in love with canvases, i'll paint you tomorrow in water colours.'

'will you eat with us?' the dark girl asked.

'no. i go to eat with my legitime.' that was what they said then. now they say 'my reguliere'.

'go on, then,' pascin said. 'and don't fall in love with typewriting paper.'

'water colours tomorrow,' he said. 'all right, my children, i will drink another and then we eat where you wish.'

'me too,' her sister urged.

'after chez les vikings?' he grinned with his hat on the back of his head. he looked more like a broadway character of the nineties than the lovely painter that he was, and afterwards, when he had hanged himself, i liked to remember him as he was that night at the dome. ...

Do you say 'pascin' like 'passion' with a french flair?

***Even the women Hemingway hung around with don't seem that hot.***

Yeah, but take another look after a few Papa Dobles :-)

I am not sure but I have heard it pronounced with a hard c sound, like "pas-kin".

Don't you think there might be something like a Flynn effect for attractiveness? Improvements in nutrition, health, "improvements" in fashion, grooming, the "technology" of posing for photographs? Or at least an observer-relative effect, a sort of temporal-cultural familiarity effect? I have no trouble believing Bronia Perlmutter was at least two or three SDs above the mean.

Very plausible that there is a Flynn effect for attractiveness for the reasons you mention.

You can use Google images to find other pictures of BP. Definitely above average but not a supermodel by any means :-)

How about Einstein's (among others) "beloved piano witch" Harriet Cohen ?

Or Ted Hughes' Assia Wevill ? He sure could pick 'em.