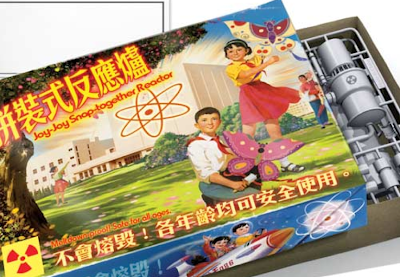 The problems at Fukushima got me thinking about pebble bed reactors, described in the WIRED magazine article below. It would be very sweet to have a reactor that self-regulates its temperature in event of catastrophe. Here is a recent NYTimes article.

WIRED: ... Beneath its cavernous main room are the 100 tons of steel, graphite, and hydraulic gear known as HTR-10 (i.e., high-temperature reactor, 10 megawatt). The plant's output is underwhelming; at full power - first achieved in January - it would barely fulfill the needs of a town of 4,000 people. But what's inside HTR-10, which until now has never been visited by a Western journalist, makes it the most interesting reactor in the world.

In the air-conditioned chill of the visitors' area, a grad student runs through the basics. Instead of the white-hot fuel rods that fire the heart of a conventional reactor, HTR-10 is powered by 27,000 billiards-sized graphite balls packed with tiny flecks of uranium. Instead of superhot water - intensely corrosive and highly radioactive - the core is bathed in inert helium. The gas can reach much higher temperatures without bursting pipes, which means a third more energy pushing the turbine. No water means no nasty steam, and no billion-dollar pressure dome to contain it in the event of a leak. And with the fuel sealed inside layers of graphite and impermeable silicon carbide - designed to last 1 million years - there's no steaming pool for spent fuel rods. Depleted balls can go straight into lead-lined steel bins in the basement.

... The key trick is a phenomenon known as Doppler broadening - the hotter atoms get, the more they spread apart, making it harder for an incoming neutron to strike a nucleus. In the dense core of a conventional reactor, the effect is marginal. But HTR-10's carefully designed geometry, low fuel density, and small size make for a very different story. In the event of a catastrophic cooling-system failure, instead of skyrocketing into a bad movie plot, the core temperature climbs to only about 1,600 degrees Celsius - comfortably below the balls' 2,000-plus-degree melting point - and then falls. This temperature ceiling makes HTR-10 what engineers privately call walk-away safe. As in, you can walk away from any situation and go have a pizza.

... If Wu's pebble-bed "thing" is, well, hot, it's because Chinergy's product is tailor-made for the world's fastest-growing energy market: a modular design that snaps together like Legos. Despite some attempts at standardization, the latest generation of big nukes are still custom-built onsite. By contrast, production versions of INET's reactor will be barely a fifth their size and power, and built from standardized components that can be mass-produced, shipped by road or rail, and assembled quickly. Moreover, multiple reactors can be daisy-chained around one or more turbines, all monitored from a single control room. In other words, Tsinghua's power plants can do the two things that matter most amid China's explosive growth: get where they're needed and get big, fast.

See also here. Unfortunately I believe the S. African project has run out of money.

... In the event of a complete shutdown of helium flow in the pebble bed, the temperature would rise at most to 2,900°F, a level well below the thermal limit of the graphite pebbles. At the higher temperature, the more plentiful uranium-238 nuclei absorb more neutrons (due to an effect called Doppler broadening) and the reactor output decreases, lowering the reactor temperature until an equilibrium is reached. The reactor heat is transferred passively by radiation, conduction, and natural convection to the steel reactor vessel, which is designed to reject the heat without human intervention.

The S Africans also lead the world in coal to oil.

However, 2900F is above the melting point of steel.

Anyway, the technology is irrelevant. It's the politics that count. And the politics means that nuclear power is dead. There is only fossil fuels.

The essence of that, though, is that at 2900F it's still impregnated in the graphite balls, not aerosolized. Getting into the air is what makes it dangerous. The structure may collapse on it, but it doesn't materially change its safety margin.

I do agree about the politics. Big business is interested in the current big regulations. It's going to take a revolution somewhere to bring the pebble reactors into play [and the breeders to re-use our huge high-level-waste stockpiles].

Eh, more then politics, I think the last line of the NYTs article gives the reason while these things are unlikely to be built on a large scale. They're expensive, while plants using coal are cheap. If your sitting on a billion dollars you want to invest in power-generation, your probable return is a lot better if you just throw up another couple coal-fired plants.

"It would be very sweet to have a reactor that self-regulates its temperature in event of catastrophe."
See http://en.wikipedia.org/wiki/Thorium_High_Temperature_Reactor : A 300 MW pebble reactor in production use from 1987 to 1989 near my home town in Germany. Never running without problems, one incident of release of radioactive aerosols into the environment, finally driving the company into insolvency.

The Chinese seem to be taking a slow and cautious route with this. Let's hope that if they decide to proceed with rolling these out it will be because they've solved the safety issues.