How the athletic shoe was born in Eugene, Oregon. Bill Bowerman was Phil Knight's track coach at U Oregon. Together, they founded Nike.

William Jay "Bill" Bowerman (February 19, 1911 – December 24, 1999) was an American track and field coach and co-founder of Nike, Inc. Over his career, he trained 31 Olympic athletes, 51 All-Americans, 12 American record-holders, 24 NCAA champions and 16 sub-4 minute milers. During his 24 years as coach at the University of Oregon, the Ducks track and field team had a winning season every season but one, attained 4 NCAA titles, and finished in the top 10 in the nation 16 times. 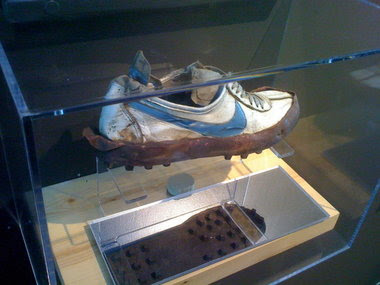 Oregonian: ... Phil Knight is Nike's well-known business and marketing brain, but Bowerman was its mad scientist. His eureka moment came one Sunday morning in 1971 in that house overlooking the McKenzie River.

Bill and Barbara were fixing breakfast -- Barbara wasn't at church, a common mis-telling -- as Bill raised a familiar topic: how to make shoes lighter and faster. Oregon's Hayward Field was transitioning from a cinder to an artificial-surface track, and Bill wanted a sole without spikes that could grip equally well on grass or bark dust.

"It was one of the few (footwear-related) things he ever talked to me about, so it was kind of fun for me," Barbara told Reames in an interview he conducted for Nike in 2006. "I picked out a couple pieces of jewelry and things that had stars on them, or things that we thought would indent or make a pattern on the soles. We were making the waffles that morning and talking about (the track).

"As one of the waffles came out, he said, 'You know, by turning it upside down -- where the waffle part would come in contact with the track -- I think that might work.'

"So he got up from the table and went tearing into his lab and got two cans of whatever it is you pour together to make the urethane, and poured them into the waffle iron."

Bill's breakthrough spawned Nike's Waffle Trainer, released in 1974, the first innovation in a company that became known for them. Before it, most athletic soles were flat with shallow patterns. The waffle had nubs that protruded like the tread on a motorcycle tire.

The distinctive shoe took off, Nike's "air" technology used in Air Jordan basketball shoes soon followed, and the Swoosh was on its way to becoming the top-selling athletic brand in the world. 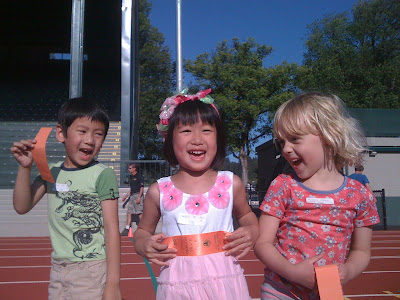 My degree in physics taught me how to back out from an automobile's stopping distance its maximum useful horsepower as a function of speed and its theoretical optimal 0-60 acceleration time. But this relies on the simple coefficient of friction model. I don't remember learning much that would help with tire or trainer design since the model I was taught says "it's all the same". I wonder how serious the physics in sneaker design is. In tires for passenger cars I think the number one consideration is always hydroplaning.

I suspect that way-back-when it was a bigger issue. Rubberized tracks are soft and tacky [and were new at the time], so you want as much surface of your shoe hitting it so you don't slip. Running [cross-country] in the grass and leaves is a slicker proposition, so you want nubs sticking out to catch the ground. The waffle-racer style shoes struck a balance. Nubs small enough to be absorbed by the track but as big as they can be for running the meets in the fall.

Nowadays, most people race most of the time in spikes [yay plastic!].

They have a sports science lab in Beaverton at Nike headquarters. It's probably more engineering and human physiology than physics, but what they do looks like fun!