It's Sunday morning in Beijing. I arrived last night and am staying in a hotel in Zhongguancun, the Silicon Valley of China, which is also close to the two top universities -- Beida (Beijing University) and Tsinghua. The institute I am visiting (part of the Chinese Academy of Sciences) is a short walk from here.

Note the contrast between the nice hotel room and what is just outside. This is typical in China at the current level of development. Also note the pollution -- reminds me of LA in 1980s :-( 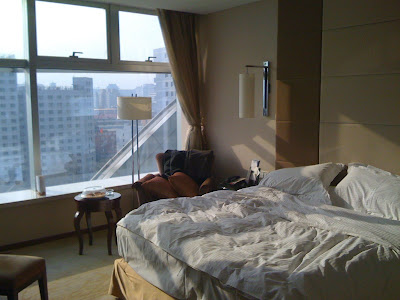 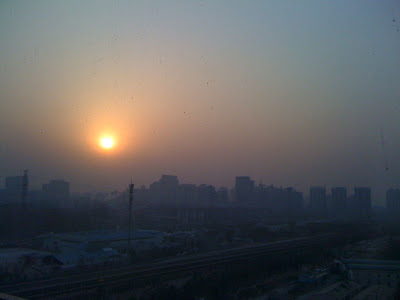 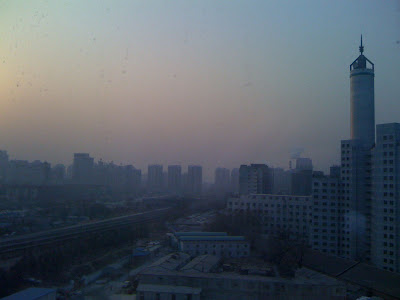 If you look carefully, you can see some dormitories near the center of the picture below. It's not temporary housing for construction workers -- I saw people coming in and out this morning, they are relatively young and include both men and women. *** 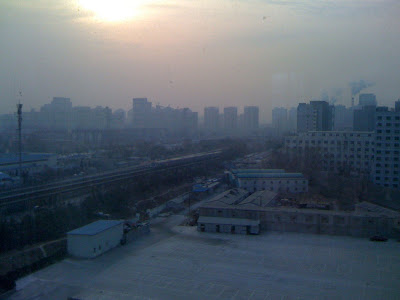 In an earlier post I discussed Shanghai PISA scores. Many people have the idea that Shanghai and Beijing are showcase cities -- unrepresentative of China as a whole. This is certainly true to a degree, but these are cities with populations of 20+ million people (larger than many countries in the PISA data). It's quite hard to raise the overall level of 20 million people. You don't have to look very hard in even the most developed parts of these places to see the grittier aspects of life here.


*** I seem to have discovered an ant colony -- a dwelling place for members of the "ant tribe" :-) The NYTimes is on the story (video):

BEIJING — Liu Yang, a coal miner’s daughter, arrived in the capital this past summer with a freshly printed diploma from Datong University, $140 in her wallet and an air of invincibility.

Her first taste of reality came later the same day, as she lugged her bags through a ramshackle neighborhood, not far from the Olympic Village, where tens of thousands of other young strivers cram four to a room.

Unable to find a bed and unimpressed by the rabbit warren of slapdash buildings, Ms. Liu scowled as the smell of trash wafted up around her. “Beijing isn’t like this in the movies,” she said.

... Chinese sociologists have come up with a new term for educated young people who move in search of work like Ms. Liu: the ant tribe. It is a reference to their immense numbers — at least 100,000 in Beijing alone — and to the fact that they often settle into crowded neighborhoods, toiling for wages that would give even low-paid factory workers pause.

“Like ants, they gather in colonies, sometimes underground in basements, and work long and hard,” said Zhou Xiaozheng, a sociology professor at Renmin University in Beijing.

The central government, well aware of the risks of inequitable growth, has been trying to channel more development to inland provinces like Shanxi, Ms. Liu’s home province, where the dismantling of state-owned industries a decade ago left a string of anemic cities.

Despite government efforts, urban residents earned on average 3.3 times more last year than those living in the countryside. Such disparities — and the lure of spectacular wealth in coastal cities like Shanghai, Tianjin and Shenzhen — keep young graduates coming.

“Compared with Beijing, my hometown in Shanxi feels like it’s stuck in the 1950s,” said Li Xudong, 25, one of Ms. Liu’s classmates, whose father is a vegetable peddler. “If I stayed there, my life would be empty and depressing.”

While some recent graduates find success, many are worn down by a gantlet of challenges and disappointments. Living conditions can be Dickensian, and grueling six-day work weeks leave little time for anything else but sleeping, eating and doing the laundry.

But what many new arrivals find more discomfiting are the obstacles that hard work alone cannot overcome. Their undergraduate degrees, many from the growing crop of third-tier provincial schools, earn them little respect in the big city. And as the children of peasants or factory workers, they lack the essential social lubricant known as guanxi, or personal connections, that greases the way for the offspring of China’s nouveau riche and the politically connected.

Emerging from the sheltered adolescence of one-child families, they quickly bump up against the bureaucracy of population management, known as the hukou system, which denies migrants the subsidized housing and other health and welfare benefits enjoyed by legally registered residents.

Add to this a demographic tide that has increased the ranks of China’s 20-to-25-year-olds to 123 million, about 17 million more than there were just four years ago.

“China has really improved the quality of its work force, but on the other hand competition has never been more serious,” said Peng Xizhe, dean of Social Development and Public Policy at Fudan University in Shanghai.

At the meeting I attended last month in Shanghai I asked a Beida PhD student if he knew people in the ant tribe. "Of course," he said. "A former classmate [physics major!] is one of those ants."
Posted by Steve Hsu at 9:51 PM

Well, 300 million is the top 20-25% of the population in terms of educational opportunities. I wouldn't be surprised if the average scores of this subgroup were roughly as high as Shanghai's. For the bottom 300 million I would guess scores are a lot lower. But I think it's just a matter of access to resources.

If you want to compare to a wealthy country with population 300M, mean 100 and SD 15 (basically US or EU), I guess China produces somewhat more elite brainpower. Too bad the system here isn't set up to make optimal use of these people. At dinner last night Seth Roberts, who teaches at Tsinghua, claims the undergrads there blow away the Berkeley undergrads (he used to teach at Berkeley).