It is sometimes claimed that IQ is just a proxy for SES (Socioeconomic Status): high IQ kids are merely the beneficiaries of better home environments, and correlations between IQ and life outcomes are merely a proxy for correlations between childhood environment and outcomes. Of course, this claim does not address the significant variations in IQ within families. Does IQ have predictive power once SES is controlled for? The answer is obvious from anecdotal experience: we all know siblings who, by definition, shared the same family SES, but with different IQs and life outcomes.

Vanderbilt psychologist David Lubinski sent me a recent paper addressing this issue -- Cognitive Epidemiology: With emphasis on untangling cognitive ability and socioeconomic status, Intelligence 37 (2009) 625-633. Among the figures is the following one, based on NLSY longitudinal data (the analysis was originally done by Charles Murray). It compares life outcomes of paired siblings (one of each pair required to be in the "normal" reference range of IQ), thereby controlling for SES. As you can see, IQ has a strong impact on education, earnings and social status even after family SES is controlled for. (Click for larger version of figure.) 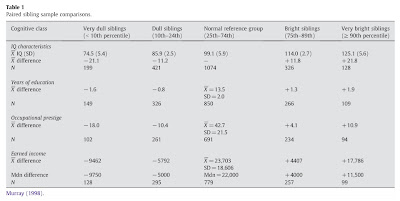 Similar analysis shows that the correlation between SAT scores and college grades only decreases slightly when SES is controlled for. See also related post on non-shared environmental effects.

Below is a useful SES-SAT (or SES-IQ) syllogism, well supported by the studies at the two links above.

SES does not cause SAT (weakly at most). ***
SES does not predict college success, SAT does.

*** Someone recently asked me about the non-genetic or environmental variation in adult IQ. If we use a heritability range of .7-.9 (as deduced in twin studies; applicable for IQ in late adulthood and over a large range of childhood environments), then the resulting distribution of IQ differences for monozygotic twins would have SD = 5-8 points. That is, clones raised in different families would typically have IQ differences of around 5-8 points. Note, though, that very little of this difference is accounted for by SES -- most of it is due to non-shared environmental effects. For a lower heritability value such as .5 (perhaps more appropriate for adolescents), the expected variation between clones would be about 10 points.

I see two problems with this study design:

1. Is SES actually controlled? If siblings are being compared, as opposed to twins, then SES will differ between them. Also, it's not even clear that twins will have the same SES, because they may live in different neighborhoods if for example the parents are divorced.

2. Even if SES is controlled for, it is not clear that IQ is the causal factor in later SES differences between the sibs. IQ may correlate with other causes due to nonshared environmental or genetic correlations between IQ and SES-influencing traits.

By SES I mean the childhood SES experienced by both siblings. So, yes, it's controlled.

Do you have a plausible model that explains the data but in which IQ is not related to the life outcomes? Your model has to have factors that

1. vary among siblings
2. are correlated with IQ
3. but somehow are not IQ, and yet cause differences in educational achievement, earning power, etc.

"It is sometimes claimed..."

"SES does not predict college success, SAT does..."

"and over a large range of childhood environments..."

What is a "large range"?

"typically have IQ differences of around 5-8 points"

What the f does "typically ... of around" mean?

Steve claims that he does not reify IQ yet he here claims IQ is a cause. How can something which is not a real thing be a cause?

Perhaps Steve does not know what "reify" means.

It's been a long time since you've added anything constructive to the discussion here. I don't get the sense that other commenters are interested in your opinions. Also, your latest anti-semitic comment re: Sergey Brin is not appreciated.

Any more of this and you will be banned from further comments on this blog.

Perhaps it will help if I clarify what I'm talking about with a sib design not controlling for parental SES.

My parents were of low income when they raised my older brothers, but rather well off by the time I was raised. It's not reasonable to say that my brothers and I had the same SES.

"Do you have a plausible model"

I don't have a complete model here, but I have some ideas for how this could work. For example, imagine that a student ends up hanging out with a group of friends that value good grades and succeeding at school. This will probably increase their IQ a few points (see the work of Kindermann on that note), but it will also have other positive effects which boost later life outcomes (e.g's a good work ethic, better networking group, a greater familiarity with upper class norms). If those other positive effects (which are correlated with IQ due to having the same nonshared environmental cause) work to improve later life outcomes, then we might mistakenly give the credit to IQ.

I think when people say that IQ causes something they're saying that, whenever other things are controlled for, whatever IQ is measuring is responsible for it.

Ben I think your SES history is a rare case, so I doubt it changes the overall result.

Also, I suspect any up-down movements in SES largely average out -- for every family that gets rich in time to help the 2nd child there is a family that moves down in SES, handicapping the 2nd child relative to the first. In any case, why would this effect make high IQ kids systematically more successful than low IQ kids (which is what the data suggests)?

I don't think balancing out matters for this methodological problem. The problem is that sibs vary from each other in SES, so there is no reason to believe that SES isn't (partly) responsible for the higher earnings/IQs. Here is an example w/ two families:

The conclusion of this 2 person microcosm of a sib study would be that SES doesn't matter for IQ/earnings. Note that averaging out of SES makes no difference.

Of course you don't get it.

My comments are for my amusement and for those who see you for what you really are:

a not so smart man obsessed with IQ.

But averaged over a large sample, why would SES changes help the high IQ kids and not the low IQ kids?

Also, since most sibs are born within a few years of each other (the average age difference has to be 5 years or less, I would guess), it's hard to imagine most families experience a material change in SES during that period. Most sibs will experience a large overlap of SES experience.

If SES boosts both IQ and life outcomes, then the higher IQ sib will tend to be the one who was raised under the higher SES.

Comparing twins reared together would mostly avoid this.

This only works for you if the SES effect on IQ is huge and applies when one sib has only a few years more under better SES conditions. But we know that the heritable part is > .5 of variance and that adoption/twins studies show that SES (as opposed to non-shared E) has only a small effect even when comparing two very different families. So I think your effect is tiny.

Hmm, possibly. I would note that studies which establish a small C effect (and implicitly a small SES effect) are based on how much total population variance can be explained by C.

In contrast, there's a much smaller "pie" of variance when we're comparing sibs, because C will have no effect, and G's effect is cut in half (since they'll share half the genes). Therefore, smaller environmental diffs between sibs will matter much more in this design than they would in a population-representative twin study. So it might not make sense to use those twin studies to reason about variance in these sib comparison studies.

On the other hand, the SES differences will be smaller as you point out, so they might not have much of an overall effect.

So I don't see how we can be certain how much this effects the study.

From Table 5 of (Rowe 1999) available at http://www.uam.es/personal_pdi/psicologia/pei/download/Rowe1999.pdf

Isn't SES the affinity and IQ the acuity [err, stabilizer]? The success function is from the space defined by the semidirect product of SES and IQ. A little weird, though, because the eigenvalues of IQ !=1, so there is some interaction between the two, and by evidence not abelian. At least that is how I think of it. Do you think that the success function is compositional SES(IQ(x)) or IQ(SES(x)) ?

I take issue with your concept of socioeconomic status-SES (or what seems to be the new trendier term "socioeconomic position-SEP" ). SES/SEP is not simply a measure of income but also it should incorporate a measure of education. For example most people would consider a kid who was being raised by parents who are in a higher education type pipeline (e.g. med students, law students, earning a PhD, or doing a professional on the job training such as law clerk or medical residency)to be of much higher social class than a kid who was being raised by parents who had much higher paying union jobs in factory or were truck drivers.

So I highly suspect that your parents were actually higher social class (i.e. engaged in higher education-associated career tracks) even when they were "low income parents".

My sibs and I were quite stable: one got +1 sd pretty consistently on standard tests, two got +2, one got +3. We all got read to on laps, lot of books in the house - SES the same. Heredity is what's left, it seems to me.

Good point. There wasn't as much of an SES change if educational (prospects) are taken into account.