Why do I take photos of my kids or while traveling? The answer is so obvious it's a cliche: for the memories.

Remarkably, long term human memory capacity is probably only on the order of a gigabyte. Ask yourself what specific things you remember from the year 2000. How about your first day of class in college?

While the brain processes huge amounts of data (dominated by visual input), the amount of information retained is quite small -- no more than a few bits per second. When I ask you what your date's prom dress looked like, you are probably reconstructing it from conceptual primitives like "blue", "prom dress", or "velvet" :-) Do you think you could picture all of the girls you ever dated if you hadn't looked at their photographs over the years?

Looking at old photographs allows me to recapture and enhance otherwise elusive memories. Also, there's some selection bias in what one chooses to photograph: the memories triggered tend to be happy ones. Viva Espana! :-)

Human Memory: ... This makes the work of Thomas K. Landauer very interesting, for he has entirely avoided this hardware guessing game by measuring the actual functional capacity of human memory directly (See "How Much Do People Remember? Some Estimates of the Quantity of Learned Information in Long-term Memory", in Cognitive Science 10, 477-493, 1986).

Landauer reviewed and quantitatively analyzed experiments by himself and others in which people were asked to read text, look at pictures, and hear words, short passages of music, sentences, and nonsense syllables. After delays ranging from minutes to days the subjects were tested to determine how much they had retained. The tests were quite sensitive--they did not merely ask "What do you remember?" but often used true/false or multiple choice questions, in which even a vague memory of the material would allow selection of the correct choice. Often, the differential abilities of a group that had been exposed to the material and another group that had not been exposed to the material were used. The difference in the scores between the two groups was used to estimate the amount actually remembered (to control for the number of correct answers an intelligent human could guess without ever having seen the material). Because experiments by many different experimenters were summarized and analyzed, the results of the analysis are fairly robust; they are insensitive to fine details or specific conditions of one or another experiment. Finally, the amount remembered was divided by the time allotted to memorization to determine the number of bits remembered per second.

The remarkable result of this work was that human beings remembered very nearly two bits per second under all the experimental conditions. Visual, verbal, musical, or whatever--two bits per second. Continued over a lifetime, this rate of memorization would produce somewhat over 10^9 bits, or a few hundred megabytes. 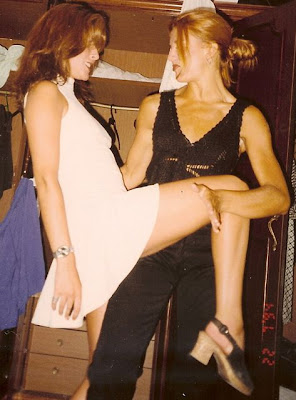 Most people seem to recall the proper use of thousands of words, possibly in various languages.

In any case, I gather this is as far the memory that is readily accessible is concerned. I'm wondering if there's memory that's stored somewhere but inaccessible for active use. Like, you might not recall what the dress looks like, but you might recognize it if you see it.

You say 'primitives' and I think, 'compression'

It's an interesting question whether learning a new language (or academic subject) as an adult requires a GB of new memory formation. I wouldn't be surprised if it was much less, since a dictionary is only a few MB.

I think we do have a lot of inaccessible memory around (perhaps another order of magnitude at most over the GB estimate, though). These are often triggered by looking at a photo or listening to music or even a smell.

Yes, primitives and compression are related. When we compress in a lossy way we just map to the closest primitive.

It seems to me that the human brain has the capability to remember for than 1 GB except that something is not turned on.

See this video about a woman who never forgets anything:

meant to say more than 1 GB

***Do you think you could picture all of the girls you ever dated if you hadn't looked at their photographs over the years?***

Facebook is great in this respect. Sometimes the picture doesn't quite reflect the memory though!

Steve's back at it with more psychobabble.

Looks like Mr. Brin of Google also has some long-term memories of his own. What a great individual. An intellectual with true character.

"An intellectual with true character."

Brin is a Jew. Reconsider your appraisal, s'il vous plait.

Yes, primitives and compression are related. When we compress in a lossy way we just map to the closest primitive.

So in my own adult learning, I'm always trying to reinforce what I learn enough to try and form new primitives, so I don't lose a lot in the mapping step. I think [completely anecdotally] that many middle-aged people are still mapping to the primitives they learned as 20-somethings.