An interesting new report on innovation competitiveness. Click below for some summary statistics and rankings. The US placed 6th overall. The countries ranked higher tend to be small (e.g., Sweden, Denmark), with the exception of S. Korea. The report also gives "change scores" in each category -- essentially, the first derivative calculated over 1999-2005 -- that indicate who is gaining on whom.

The authors normalize most statistics to national GDP or population, which gives a more realistic picture of smaller countries than just looking at aggregate numbers. Some figures seem quite misleading. For example, Russia ranks number one in Higher Education with over 50% of the population completing tertiary education, whereas Germany ranks only 18 with 22%. But I suspect the level of training and human capital is much higher in Germany. Similarly, rankings of venture capital invested relative to GDP probably overstate the impact of government-backed funds in many smaller countries which lack a long history of venture investing. Some tables of interest in the report include corporate and government-funded R&D relative to GDP, GDP per capita and productivity per capita.

The overall conclusion of the report is that the US is in a strong position, but that others are catching up fast. 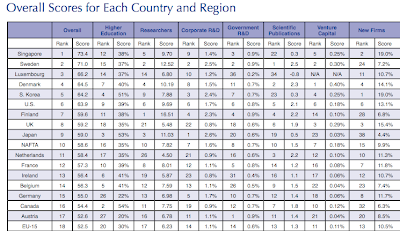 "For example, Russia ranks number one in Higher Education with over 50% of the population completing tertiary education"

The figure for Russia is not credible.