There is no way government stimulus can replace the trillions of dollars of debt driven demand that the US and world economy have relied on for years. What's ahead? See here for some very good, but very gloomy, analysis. (Earlier related post here -- see Microsoft CEO Balmer's comment.)

Let's hope we don't go the way of Japan: 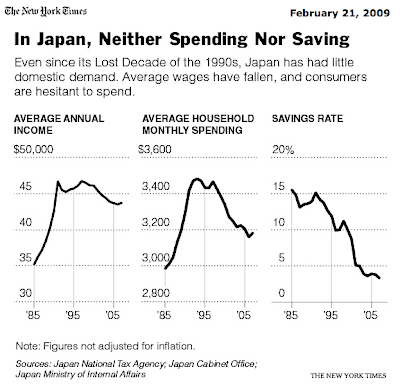 NYTimes: As recession-wary Americans adapt to a new frugality, Japan offers a peek at how thrift can take lasting hold of a consumer society, to disastrous effect.

The economic malaise that plagued Japan from the 1990s until the early 2000s brought stunted wages and depressed stock prices, turning free-spending consumers into misers and making them dead weight on Japan’s economy.

Today, years after the recovery, even well-off Japanese households use old bath water to do laundry, a popular way to save on utility bills. Sales of whiskey, the favorite drink among moneyed Tokyoites in the booming ’80s, have fallen to a fifth of their peak. And the nation is losing interest in cars; sales have fallen by half since 1990.

"So you will see the Federal Reserve buy long-term Treasury bonds, as it did in the Great Depression."

When did Dalio say this? The market has backed off the 2.5% on long term treasuries to 3.5%.

Peter Schiff is more insightful than any of these guys.

I thought you had turned Keynesian?

I think Keynes had many insights that were forgotten by the cult of the efficient market that has come to dominate modern economics. See here.

But that doesn't mean I endorse every "Keynesian" policy measure.

The demand destruction from deleveraging is so big that government stimulus will not be able to take its place. Stimulus might be worthwhile, and improve the situation somewhat, but we are definitely in for a period of reduced consumption and economic activity. (See Ballmer's comment.)

Let's hope we don't go the way of Japan

If that's the worst you think we are to face, then you sound pretty optimistic to me.

I think we are definitely going the way of Japan in the 1990's. I think it inevitable. The U.S. political class, just like their counterparts in Japan, will try all kinds of Keynesian "parlor tricks" in a vain attempt to boost the economy, with the same result as Japan. As Peter Schiff points out, there are massive marketplace distortions that must go away before the economy can recover. The political class seems obsessed with maintaining these marketplace distortions. Perhaps, again like their Japanese counterparts, they are all corrupt.

The problem is structural in nature, not cyclical. This is why Keynesian policies, by definition, not only cannot work, but will make things worse.

I agree with you on the structural issues.

But that doesn't mean Keynesian stimulus can't have a positive effect. The govt is borrowing from the future in the hopes of improving general confidence levels today. If you let confidence sink too low we may overshoot the necessary structural corrections. Also, it would be better to let the corrections happen gradually rather than instantaneously ;-)