The following paper has some beautiful figures, including the one below illustrating the heritability of physical brain structure based on MRI studies of twins.

Neurobiology of Intelligence: Science and Ethics

Human mental abilities, such as intelligence, are complex and profoundly important, both in a practical sense and for what they imply about the human condition. Understanding these abilities in mechanistic terms has the potential to facilitate their enhancement. There is strong evidence that the lateral prefrontal cortex supports intelligent behaviour. Variations in intelligence and brain structure are heritable, but are also impacted by factors such as education, and prenatal and family environments. The empirical convergence of cognitive, social, psychometric, genetic, and neuroimaging studies of intelligence is scientifically exciting, but raises important ethical questions. If these are not addressed, further empirical advances might be compromised. 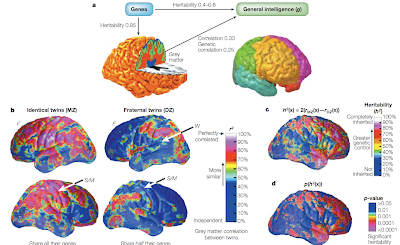 Click for larger image, or look at the actual paper. From the figure caption, which is quite long:

Figure 3 |Linking genes, brain structure and intelligence. a| Genetic influences on intelligence have been assessed directly (top arrow). The consensus of many studies is that at least 40% of the variability in general cognitive ability (g) can be attributed to genetic factors89. Gene effects on brain structure can be assessed by collecting MRI brain scans (left) from twins or extended families, and comparing volumes of grey matter (green), white matter (red) or cerebrospinal fluid (blue). Overall brain volume is 85% heritable34and correlates with psychometric intelligence (0.33) (REF.30). ...The volume of grey matter in each lobe is genetically influenced to different degrees (the volume of grey matter in the frontal lobe, shown at right in yellow and pink, is highly heritable). b| Genetic influences on brain structure can be assessed using statistical maps. In the classical twin design, a feature is heritable if within-pair correlations (typically called intraclass correlations) are higher for pairs of identical twins (who share all their genes, except for rare somatic mutations) and lower for same-sex fraternal twin pairs (who, on average, share half their genes). To better understand genetic influences on brain structure, correlations are shown for regional grey matter volumes in sets of identical (monozygotic (MZ)) and fraternal (dizygotic (DZ)) twins. These correlations vary across the brain surface (red, highly correlated; blue, less well correlated). The structure of the brains of identical twins is more similar than that of fraternal twins. ...Variations in grey matter volumes are strongly influenced by genetic factors, especially in frontal brain regions (for example, the dorsolateral prefrontal cortex). A subsequent study in a larger, independent sample34found that variations in total grey matter volume were almost entirely attributable to genetic factors... These genetically mediated differences in brain structure explain a proportion of the variation in general cognitive ability. This ability is also influenced by non-genetic factors such as education and nutrition97,151, prenatal and family environments, training35and environmental hazards such as lead poisoning.

That is, given the current range and variabitity of environment.

That this heritability is so much less than the heritability of brain volume indicates that IQ is as Binet would have it only valid for identifying imbeciles.

"That this heritability is so much less than the heritability of brain volume indicates that IQ is as Binet would have it only valid for identifying imbeciles."

ABSTRACT—A sample of 1,586 intellectually talented adolescents (top 1%) were assessed on the math portion of the SAT by age 13 and tracked for more than 25 years. Patents and scientiﬁc publications were used as criteria for scientiﬁc and technological accomplishment. Participants were categorized according to whether their terminal degree was a bachelor’s, master’s, or doctorate degree, and within these degree groupings, the proportion of participants with at least one patent or scientiﬁc publication in adulthood increased as a function of this early SAT assessment. Information about individual differences in cognitive ability (even when measured in early adolescence) can predict differential creative potential in science and technology within populations that have advanced educational degrees."