There's very little information on the web about this. Elizabeth McDonald at Fox Business:

...A key driver behind the market plunge has been the tremendous demand for cash from counterparties related to the CDS (credit default swap) payouts on these recent major credit events.

This past Monday: An estimated $200 bn to more than $1 tn in CDS written on Fannie and Freddie’s debt, the two companies’ senior and subordinated debt, were auctioned on Monday.


Felix Salmon has a nice discussion, and a news search brings up this schedule for the auction. My CDS posts here.

Salmon: ...Now there are people who made money betting against Lehman Brothers by buying default protection. And since the CDS market is a zero-sum game, there must therefore be people who lost money by selling that protection. The $400 billion question is whether they have the wherewithal to make good on their obligation. (And remember that $400 billion is a gross number: the net exposure -- the total amount that some people made and others lost -- is much smaller.)

I'm optimistic on that front: I think the answer is yes, although it might well involve selling collateral and other securities in order to come up with the cash. So there could be some nasty liquidation events on or around October 10. But I suspect that a lot of the exposure to Lehman came from synthetic bonds, CDOs of CDSs, and that kind of thing -- in other words, it resides on the buy-side, not on the sell-side.

It's always possible that some hedge fund somewhere will find itself going bust as a result of writing protection on Lehman -- but so far the big hedge-fund returns on CDS have been positive (Paulson, Lahde) and not negative. I'm holding out hope that the same will hold true on October 10.

This just up from Barry Ritholtz. Today (Thursday) looks like a very bad day for equities... suspicious. Tomorrow could be worse?

I've heard concerns from various traders and hedge fund managers over the past few weeks that the Lehamn Brothers (LEH) derivatives unwind has been what's roiling markets.

Early October, Citi (C) credit analyst Michael Hampden-Turner estimated there is $400bn of Lehman credit derivatives that will be settled on Friday.

This picture may tell all, once the dust settles. Either I am overly focused on the role of CDS, or the financial press and academic economists are totally missing one of the biggest drivers of systemic risk and current volatility. Here is a post I wrote in 2005 linking CDS strategies to equity vol. At the time, over half of all CDS volume involved hedge funds. In the end I think we're going to see some big hedge funds wiped out from selling naked or poorly hedged CDS insurance. 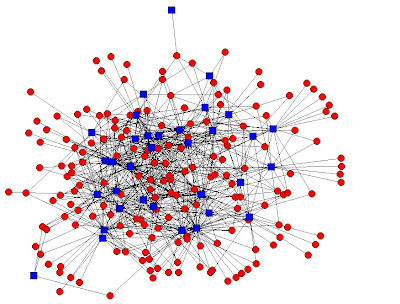 I think this is one of the problems and people may praise Paulson (and Bernanke) less if they consider that he botched both FNM/FRE (it was a mistake to wipe out preferred equity) and then LEH.

Oct 8 (Reuters) - The value of credit default swaps backed by defaulted Lehman Brothers bonds will be set on Friday, with protection sellers expected to face massive losses of around 90 percent of the insurance they sold.

Bondholders have seen their investments virtually wiped out by Lehman's bankruptcy filing on September 15, with most of the defaulted bonds which will be used to settle the swaps trading in the area of 12-to-13 cents on the dollar, according to MarketAxess.

Twenty-two dealers will participate in the auctions, which will determine how much protection sellers will recover after paying out the insurance. The timeline for the auctions follows, according to JPMorgan.

9:45 a.m.-10 a.m. Auction participants will submit bids and offers for the debt backing the credit default swaps, which will be used to determine the initial recovery rate of the swaps.

10:30 a.m. Auction administrators Creditex and Markit will publish the initial recovery price and the open interest for the contracts will be published. The open interest reflects the amount of bids and offers that have been made, and will show if there are more buyers than sellers, or vice versa.

12:45 p.m. -1 p.m. Participating dealers will submit limit orders for the debt on behalf of themselves and their clients to fill the open interest

2 p.m. The final price of the auction will be published. (Reporting by Karen Brettell; Editing by Chizu Nomiyama)

Its going to be an interesting market close tomorrow after the results of the auction are released.

The Fanny/Frerddy settlment went quite smoothly, and the agreed bond values came somewhere betweeen 91 and 99. According to my calculations (no expert), net amount that had to be paid out i.e. loss to protection writers was $1.2 billion. Divide that by 13 active participants, per participant the Fannie/Freddy CDS loss was average under $ 100 million. The Lehman auction clearing price will come out some where between 15 to 20, hopefully higher between 20 and 30. So the loss will be 85% to 70& of NET notional. Although the gross notionals in these CDS contracts are huge, net is usually smaller ( no one knows for sure how much smaller for the market as a whole although each house knows its own position. If Mack knows he has a big exposure on LEH CDS, would he be putting out "we are ok" call to all his boys yesterday?). Freddie/ Fannie Net settlement was $1.2 billion, and the average price was say 96. so the net exposure was approx $30billion. Fannie and Fredddy were the biggest insured names in the CDDS market. So for the Lehnam name, the NET exposure may be much smaller, but the loss per contract would be higher. If we say the Lehman Net Exposure is 20% to 25% of Freddie/Fannie net exposure of $30 billion, it would be around $6 billion to $7.5 billion, and with recovery at say between $50 and $60 billion total systemwide loss. Spread over the 13 major deealers, average is $4 to $ 5 billion, but the spread may be wide I dont know the bank equity analysts and the market has already factored such numbers in, but if the expectation is for lower number, than this may surprise on the upside. If the not, market may take a sigh of relief that the LEH CDS damnage is not so bad,

The only risk is that in the case of Lehman, there is much less netting i.e. the protection writers have huge one sides positions, and my estimates start blowing out.

Not an expert, just trying to decipher the numbers with some commonsense reasoning."

If I understand the situation correctly, $400 billion dollars is notional, not net. This means that net is likely to be much smaller. It does not seem enough reason to me for there to be such panic.

Even if it is $400 billion net, doesn't Paulson's $700 billion chest suffice? The market's steep fall, if just due to this, is puzzling. Would it rise back up if the actual payout turns out to be much smaller tomorrow?

Great post. I found your blog from Dave over at quantum pontiff. Tomorrow is already here in this 24 hour trading day, and it doesn't look pretty.

None of the news coverage is making sense of it. I don't think they understand it.