The 350 participants in the auction -- meaning each of them are party to at least one CDS contract referencing (insuring) Lehman debt -- are a rogues gallery of big financial firms. Guess who has been trying to raise cash in anticipation of today, when hundreds of billions could change hands? The net payments will be much less than this notional amount, but each player has to have their cash ready -- the cancellations may be "non-local" (between multiple parties; see figure at bottom).

Bloomberg: ...Lehman's $128 billion of bonds were trading yesterday at an average of 13 cents on the dollar, indicating credit swap sellers may have to pay 87 cents.

...More than 350 banks and investors signed up to settle credit-default swaps tied to Lehman. No one knows exactly how much is at stake because there's no central exchange or system for reporting trades. It's that lack of transparency that has increased the reluctance of financial institutions to do business with each other, exacerbating the global credit crisis and prompting calls for regulation of the market.

The list of participants includes Newport Beach, California- based Pimco, manager of the world's largest bond fund, Chicago- based hedge fund manager Citadel Investment Group LLC, and American International Group Inc., the New York-based insurer taken over by the government, according to the International Swaps and Derivatives Association in New York.

...Hedge funds, insurance companies and banks typically buy and sell credit protection, which is used either to insure a bond against default or as a bet against the company's ability to pay its debt.

Settlement of Lehman contracts may lead to protection sellers paying out as much as $220 billion, assuming a 20 percent recovery on the U.S. bank's senior debt, according to Andrea Cicione, a London-based credit strategist at BNP Paribas SA. [Others estimate as high as $400B.]

``Banks can go to the Federal Reserve, or use the commercial paper market where it is still functioning'' to meet protection payments, said Cicione. ``But fund managers or hedge funds, once they've used their cash, have only one option, to sell assets.''

Web of three contracts with net value of $.1B and notional value of $3.1B. Even though, ultimately, only $.1B changes hands, each party may have had to bring $1B or more to the table. (Even if they have canceling positions, like B in the figure, there is always counterparty risk -- what if A can't pay up?) 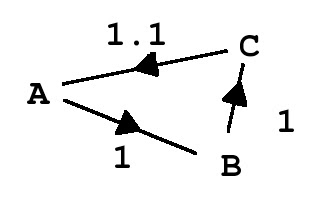 Update: Priced out at 8.625 cents on the dollar (Bloomberg). Here's an example of the type of fund that has been selling into the markets to meet obligations.

A unit of Primus Guaranty Ltd., a Bermuda-based company that has sold more than $24 billion in credit-default swaps, said last month it guaranteed $80 million of Lehman debt. The firm sold protection on $215 million of Fannie and Freddie debt and $16.1 million on WaMu. Yesterday, it said it also had made bets of $68.2 million on Kaupthing Bank hf, which the Icelandic government seized. Primus said last week it had $820 million in cash and liquid investments to meet claims on the contracts.

Felix Salmon notes that today was just the auction and parties don't settle until October 21. A commenter there claims the contracts are collateralized daily. I don't know if that is true, but if it is then the auction doesn't do much except set the price, which we sort of knew beforehand from earlier trades.

Second update: I was told again that most CDS contracts require the party offering protection to post collateral, which adjusts according to the market value of the debt. That means that the auction itself is more an accounting event than an economic event. When the default occurs the insurers already have a rough idea of what they will owe and presumably start selling assets to cover their obligations. In this case (LEH) the auction price came out below but not that far from where the market was pricing the debt beforehand. Whether any CDS issuers won't be able to cover their obligations won't be known until October 21.
Posted by Steve Hsu at 10:21 AM

Please keep us posted what it all means in jargon-free terms (e.g., using the clear picture you have)!!

It's driving me batty with the talking heads blathering on freeing up the credit market. It's jammed because of this event, no amount of liquidity injection is going to fix it until we get through it.

I'll be interested to see if history treats Paulson kindly for letting LEH failing and forcing this unwinding so a proper CDS market can be raised in its place.

Steve,
How do you find the time to keep up with all of this & other misc stuff you blog about, teach, do research, run startups, publish papers, raise kids etc ? Do you not sleep at all ?
I work in high tech (chip design) & work pretty much consumes me during the work-week. Does being in academia afford you tons of free time ?
Btw, got used to your new format, it is the content that matters to me anyway.

I dunno how I do it, since I'm the kind of person who needs 7-8 hours of sleep every night. I try to keep the blog stuff to half an hour each day. The last couple weeks have been unusual -- I typically only post a few times per week. I do have an insatiable curiosity, though, so the blog is basically a distillation of stuff I would read or listen to or think about anyway.

I'm trying to wrap my head around the financial crisis, since finance theory is something I've been thinking about for years, I know people in the industry, and I've seen a previous crash up close (the tech bubble) and hence know a bit about fear and irrationality. I'm watching a complex system that I've been studying both empirically and theoretically for years go through a phase transition right before my eyes.

Anybody care to comment on this? Apparently DTCC's point is that the CDS market is regulated and transparent enough, and would like to everyone to know it (and their role in it).

re: DTCC, I think registration of any contract with them is voluntary, so while they may have pretty good coverage ("vast majority" of trades listed there), how can we be sure?

Nevertheless their data is probably invaluable in getting a handle on the situation.

See my comment here on DTCC's role in the Lehman auction.

steve:
your graph is wrong, i.e buy and sell should net out to zero.