Dinner with the Econ

Late this afternoon (Friday), the picture below appeared on my Google Reader screen with the caption Six kinds of recycling at the University of Oregon, 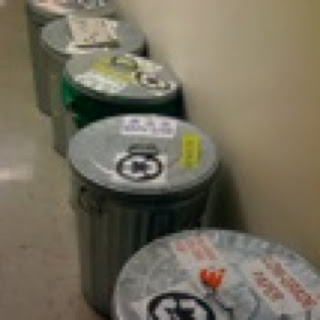 compliments of the feed from Brad DeLong's blog. I immediately thought, is Brad DeLong (with iPhone camera) on campus? and checked the seminar page in the economics department. Yes, he was scheduled for a 3:30 pm seminar, with Economist's View blogger Mark Thoma as host!

Given current events, I thought this would have to be an especially interesting talk, so I walked across campus for the chance to be a fly on the wall during a meeting of the Econ tribe. I was treated to a wonderful 90 minute talk which started from the general question of whether central banks should fight asset bubbles, but soon dove into the intricate details of the credit crisis. Mark recognized me and was kind enough to invite me to dinner, along with the speaker and professors Tim Duy and Nick Magud. It was quite an interesting discussion as we had among us a former member of Treasury (Brad), of the Fed (Tim) and an expert on Latin American financial crises (Nick). At one point Brad asked me about spontaneous symmetry breaking and the Higgs. I noted that physics is much easier than figuring out how Treasury is going to handle the bailout!

Quant trivia: at one point in the talk Brad mentions all the physicists modeling mortgage backed securities. The economists laugh, but Brad protests that his Harvard roommate Paul Mende (who did a string theory PhD under David Gross at Princeton) is now working for a hedge fund modeling volatility!
Posted by Steve Hsu at 12:14 AM

Did you ask Brad was he deleted your comments about IQ on his blog?

I stayed off that topic :-)

The comments he deleted had to do with genetic clustering, although they appeared in a thread about IQ and evolution, as I recall.