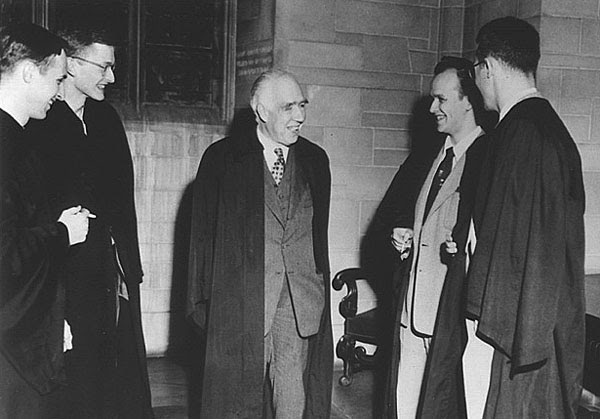 Nova has aired a version of the BBC documentary on Hugh Everett III, the discoverer of many worlds quantum mechanics. The story is told from the perspective of his rock musician son Mark Everett. I liked it very much, although the casual viewer might easily have the wrong impression that the Everett interpretation is a crackpot theory. A brief introduction to many worlds here (or, click the label below). The photo above shows Niels Bohr meeting a young Everett (to Bohr's left).

In the letter that appears here, Hugh Everett deemed this paradoxical "collapse" postulate "a philosophic monstrosity." Casting it aside, he decided to take the Schrödinger Equation at face value and work out what happens if there is no physical collapse. Everett considered the collection of all objects in the universe, including large or macroscopic systems (what we can see with the naked eye) to be fundamentally composed of atoms and molecules (microscopic quantum systems that we can't see). He suggested that these objects existed in ever-evolving superpositions without ever collapsing into a single reality, even though our reality suggests otherwise.

From a discussion with Everett's biographer Peter Byrne.

He was 27 in 1957 when his thesis was published in Reviews of Modern Physics, and the editor of that issue was a cosmologist named Bryce DeWitt. Initially, DeWitt was put off by Everett's theory. He wrote to Wheeler and Everett that, if the universe is splitting, then why don't I feel myself split? Everett wrote back to him, Well, Copernicus made the analysis that the Earth was moving around the sun, undoing thousands of years of belief that the sun was going around the Earth, and people asked him, If the Earth is moving around the sun, then why don't I feel the Earth move? And DeWitt, who was well aware of the Newtonian reasons why they wouldn't, said "Touché" and then forgot about the theory for a while. [See Everett's original letter in response to DeWitt's concerns.]

In the late '60s, when he was working seriously in quantum cosmology, DeWitt was attracted to the universal wave function as an interpretive method of dealing with what was going on, and he started writing about it. In 1970, he published an article in Physics Today that set off a fairly intense series of letters back and forth in that publication, debating the theory. Then, in 1973, he went to Everett and said, "I know that there's a longer version of your thesis than the one that I printed in 1957. I'd like to publish it." It was 137 pages, whereas the thesis that was published in 1957 was about nine pages.