To have, and have not 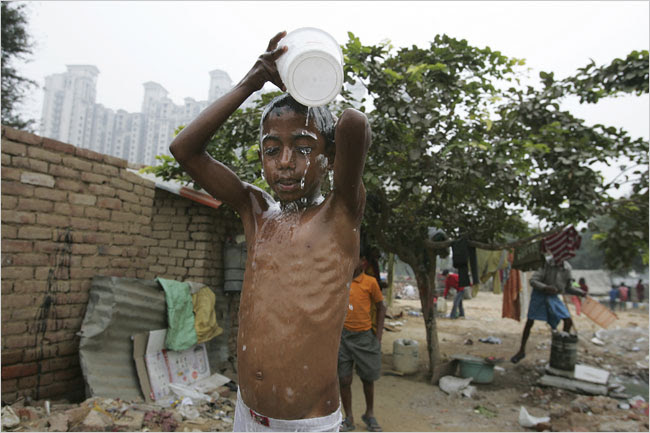 This NYTimes article starkly illustrates the gap between rich and poor in India. It depicts a gated high-rise community with its own water, power, security and health systems, surrounded by slums from which are drawn the 2.2 servants per affluent occupant family. The high-rise is visible in the background of the picture above (slideshow).

Many of the relatively few Indians who enjoy first-world living standards, including the family in the article, do so as a consequence of globalization.

...“Things have gotten better for the lucky class,” Mrs. Chand, 36, said one day, as she fixed lunch in full view of Chakkarpur, the shantytown where one of her two maids, Shefali Das, lives. “Otherwise, it is still a fight.”

When the power goes out, the lights of Hamilton Court bathe Chakkarpur in a dusky glow. Under the open sky, across the street from the tower, Mrs. Das’s sons take cold bucket baths each day. The slum is as much a product of the new India as Hamilton Court, the opportunities of this new city drawing hundreds of thousands from the hungry hinterlands.

...For those with the right skills, the good times have been very good. Mr. Chand, 34, a business school graduate who runs the regional operations for an American manufacturing firm, has seen his salary grow eightfold in the last five years, which is not unusual for upper class Indians like him.

The Chands are typical of Hamilton Court residents: Well-traveled young professionals, some returnees to India after years abroad, grateful for the conveniences. Some of them are also the first in their families to live so comfortably.

...Mrs. Chand, a doctor who decided to stay home to raise her children, trained in a government hospital. Her other maid told her recently that her own daughter had given birth at home, down there in the slum.

Sometimes, Mrs. Chand said, she thinks of opening a clinic there. But she also said she understood that there was little that she, or anyone, could do. “Two worlds,” she observed, “just across the street.”

The following Bloomberg article describes a recent World Bank study. The results are amazingly consistent with an estimate I mentioned in a previous post, that the "effective" first-world population of India in human capital terms might be around 100 million (4 high performers for every 10 in the US).

The study links the results of a test given to 6,000 teenagers in two states -- Rajasthan in western India and Orissa in the east -- to students' performance on the same exam in 51 other countries.

The researchers conclude that mathematical abilities of India's 14-year-olds vary widely between the worst and the best students.

If other states are similar to the ones studied then it would mean that 17 million Indian students don't meet the lowest international benchmark of ``some basic mathematical knowledge.'' That's 22 times the corresponding figure for the U.S.

At the same time, the depth of India's math talent -- those whose test scores are considered to be of an advanced level -- is also significant. ``For every 10 top performers in the U.S., there are four in India,'' the World Bank economists say. That's 100,000 students, or more than any European country.

This latter group is supplying the bulk of India's scientific, technical, managerial and entrepreneurial talent and is responsible for the country's growing clout in the global knowledge economy.

IQ is not a test of intelligence. I don't know why you sometimes seem to take it seriously in this blog. Eg: Feynman had an IQ of 126. Consider also the Flynn effect.

IQ is indeed highly heritable, but not from genes - but from upbringing and environment.

A note about inequalities and education in India and the IIT's, which you've written about recently:

There has been affirmative action / quotas/ reservation in India for the past 55 years, favoring people of the lower castes. Around 60% *in every place of education, including the elite institutions* of the seats are thus removed from any allotment based on merit. This "reservation" has been upheld by various populist governments in India. As a result, people who do not belong to the "scheduled castes and tribes" (much like the Jews of early 1900s and white South Africans of today) face very unfair obstacles through out their education and even in the process of getting government jobs.

and this diaspora matches the jews in SAT

In India, brahmins are 5% and merchants are 15%

India currently has malnutrition as bad as Africa

When nutrition improves, 20% of the Indian population should perform at western levels

Orissa and Rajasthan are among the most backward Indian states, with extreme poverty and malnutrition

So these results represent a floor at current levels of malnutrition