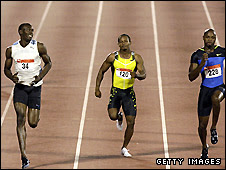 Ever wonder how Jamaica, a country of 3 million people, can compete with the US and totally dominate all of Europe and Asia when it comes to the sprints? China has spent billions on a Soviet-style sports program that selects promising athletes at a young age and sends them to special sports schools. When Liu Xiang won the 110 hurdles at the last Olympics, Chinese officials referred to his gold as the "heaviest" of all medals won by Chinese in Athens. There is no lack of Chinese desire to win sprint gold -- Liu Xiang is the biggest sports star in China after Yao Ming! Similarly, the US and Europe have far more money than Jamaica for training facilities, coaches, scholarships, stipends, etc. World class athletes in Jamaica train on a grass track and in weight rooms with rusty barbells. Most US high schools have superior facilities. (See video here.)

The times below are phenomenal -- they rival the times put up this weekend in Eugene at the US Olympic trials, and totally surpass the performance of any European or Asian nation.

Kerron Stewart won the women's 100 in 10.80, the second-fastest time by a Jamaican woman ever. Shelly-Ann Fraster was second in 10.85, Sherone Simpson followed in 10.87 and world champion Veronica Campbell-Brown was fourth in 10.87.

The 10 second barrier in the 100m has been broken hundreds of times in international competition -- but never by a white or asian.

A couple of exceptional individuals? I don't think there is a huge amount of prior national form, as it were. Or drugs. Well you have to at least ask!

This is no fluke. See article below by a black urologist in Jamaica.

The sprinting prowess of African-Americans and Afro-Caribbean people in general and Jamaicans in particular is legendary and is demanding of serious scientific enquiry and research.

Neither is it a coincidence that in the 2005 World Championships 100-metre men's final, three of the eight finalists were Jamaicans - Michael Frater, Dwight Thomas, and Asafa Powell, while Kim Collins, the defending champion, was from St. Kitts and Nevis, while three others were African-Americans, the latter representing a country over 100 times the population of Jamaica.

Notable Caribbean sprinters include Kim Collins, Hasley Crawford, Ato Bolden and Darrel Brown from Trinidad and Tobago, Obadele Thompson from Barbados, while the sprinting prowess of the Bahamian women is well known. The great black (and beautiful) French female sprinters Marie-Jose Perec and Christine Arron are both from the Caribbean French Island, Guadeloupe, while Bruny Surin a great black Canadian sprinter was born in Haiti.

While it is clear that good sport administration, excellent coaching, proper nutrition and adequate funding and facilities are vital to achieving athletic greatness, in the absence of raw athletic sprinting ability this will not occur.