I thought I'd also link to some interesting data from a paper by UT Austin economist Daniel Hamermesh, discussed here on the NYTimes Freakonomics blog.

Their survey covered UT Austin alumni between the ages of 23 and 43, revealing enormous variations in average earnings between different majors. Not surprisingly, the business majors and engineers tend to be high earners. However, the highest earners of all are the Plan II (honors college) alumni, who have by far the highest average SAT scores (1364). Note the huge variance within each major (SD = number in parentheses below the mean value), in particular for business, natural sciences and Plan II. For these majors the standard deviation is larger than the mean, suggesting, perhaps, that a few millionaires (startup founders, entrepreneurs?) are skewing the results.

...Even within major, taking more upper-division science or math courses and doing better in them raise eventual earnings. While the effects are not highly significant statistically, the t-statistics generally exceed 1.28. A student who takes 15 credits of upper-division science and math courses and obtains a B average in them will earn about 10 percent more than an otherwise identical student in the same major ... who takes no upper-division classes in these areas. There is clearly a return to taking these difficult courses. This holds true even after we have adjusted for differences in mathematical ability by using the total SAT score ... . The importance of access to this information should not be underestimated. Estimated earnings differences across majors are substantially higher (e.g., the premium for "hard" business rises to 64 log points, that for engineering to 50 log points) when the information on science and math courses is excluded from the equation in Column (1).

Click on the figure below for a larger, more readable version. 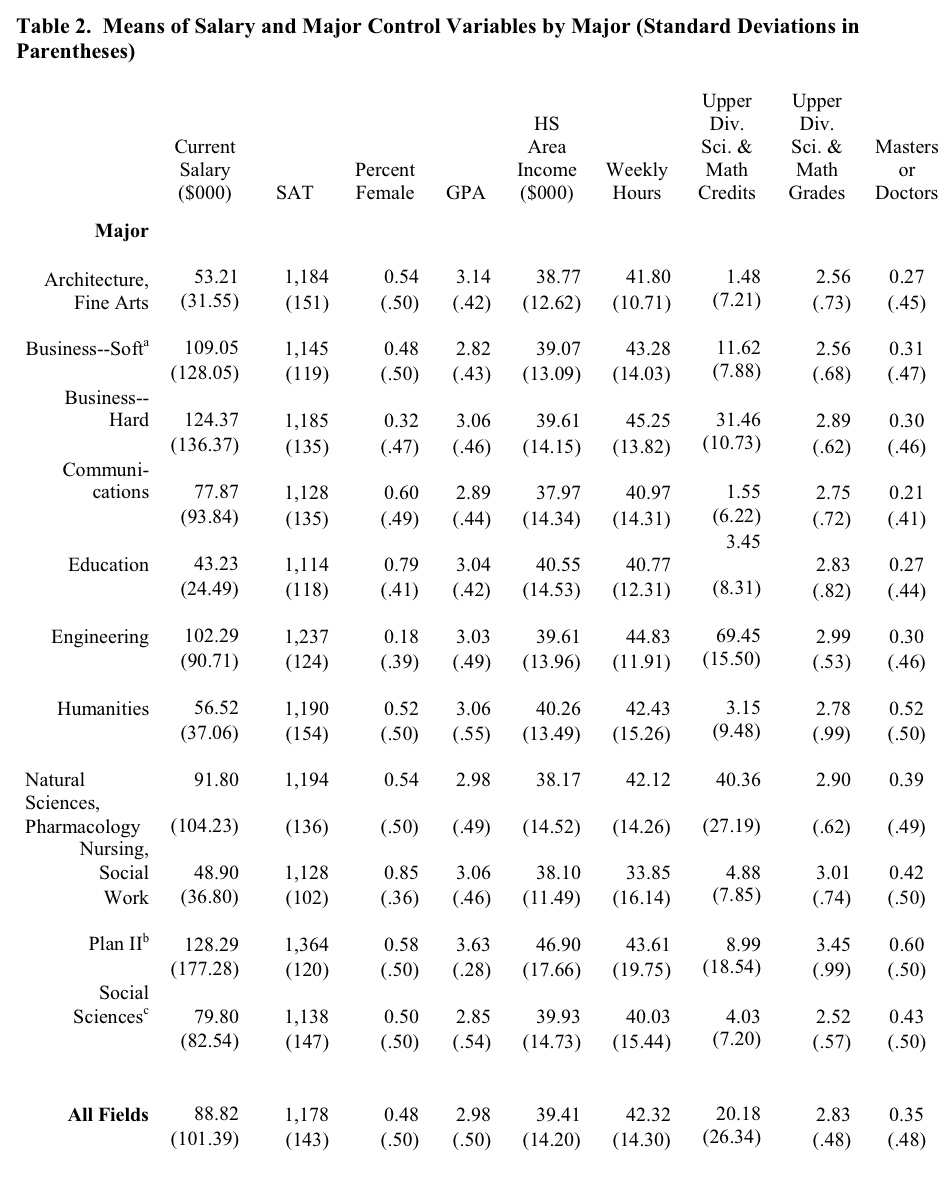 Just as going to college sorts people according to ability, what major they choose is also a sorting and signalling function. They do not make a high salary because they were business majors; the type of people who become business majors probably would have earned a lot of money regardless of their major and, indeed, regardless of whether they went to college at all. Choosing the business major simply signals their interest in it to future employers.

Many entrepreneurs I knew personally over the years, didn't major in business when they were in college.

The folks who started small businesses, such as a corner store, restaurant, garage, bed + breakfast, tattoo parlors, producing music and/or movies, franchises, etc ... ran the gamut from folks who were high school dropouts to folks who had an MBA, masters, PhD, JD, MD, etc ...

I got the impression that first hand experiences of "executing" processes properly in a particular business domain, becomes the main dominant factor than formal education for the entrepreneur type folks. I've heard it said many times that "execution" is everything in business. Mere knowledge is not good enough.

Hmm. I'll read the study later, but I'm curious how the methodology worked here. Plan II is an excellent program, but many of the students dual-enroll in other majors and take a significant portion of their classes in other the other colleges at UT.

Many of us also seemed to regard Plan II as just a precursor to grad school in medicine, law, or business. Of course, Plan II is good preparation for grad school and that's a decent plan, but it's worth considering that the outlook of the students in Plan II probably differs from the general population of UT that's only thinking of undergrad.

A query. Can you give some references on the evolution of education in different countries? I came across some interesting ones about USA by David Labaree but could not find about other countries.

If higher ed does not add much to human capital, but merely acts as a signaling / screening process, one would expect plan II people to excel due to their much higher SAT scores (IQ). I don't think the Texas data is definitive on this point, the way the verbal data I linked to in the previous post is.

A good reference on the history of US higher education is Nick Lemann's book The Big Test: The Secret History of the American Meritocracy , which chronicles the history of the SAT, how meritocracy works here, how the Ivy league (led by Harvard President Conant) transformed from provincial rich-kid's schools to national universities, etc. Lemann is now dean of Columbia's journalism school.

Also see Dan Golden's The Price of Admission (I actually discussed it on this blog some time ago), which is about how the admissions process works today, how Asians are discriminated against due to affirmative action ("the new Jews"), how Caltech is the only remaining top school to practice purely meritocratic admissions, etc.

**** Lemann from second link above:

Is the SAT an IQ test?

According to people in the field--especially if they're sort of letting their hair down--they will say the SAT is essentially an IQ test,particularly the verbal portion is essentially an IQ test. I want to step back a little from the idea that the IQ test is a scientific measurement of intelligence. From the beginning, IQ tests essentially traffic in vocabulary items: antonyms, analogies, reading comprehension, it's a test of vocabulary fluency and accomplishment. So, the premise of an IQ test is that it is the same thing as intelligence. Maybe it is, maybe it isn't. It's measuring one specific thing. It's not a magical, mystical test. The SAT grew out of an IQ test and the verbal in particular takes the oldest chestnut IQ testing techniques and applies them to high school seniors. ... It's the thing that--to the extent that there's a sort of secret about Educational Testing Service, which administers the SAT, the secret is that at least the test makers there know that what they're doing is administering a mass IQ test but the organization's very invested in denying that.

It's not an accident that the emphasis was put on aptitude instead of achievement and as a matter of fact that Conant pretty much insisted on it?

First of all, Conant himself, although he was never a card-carrying member of the eugenics movement, clearly believed in the basic theory that intelligence is an innate and sort of biological quality and that it's the most important human quality. So that's the starting point. But on a more practical level, when he's starting the system in the 1930s and 40s, American education is highly various--it's a big country, you know, air travel and long distance telephony are in their infancy. Schools are just very different from place to place. There's no national curriculum. So you need a way to perform a straight-up comparison of high school students who have been exposed to very different kinds of education. And to Conant the IQ test or aptitude test is the best way to do that. He was quite insistent on that.

Gaddeswarup: Oops, I didn't notice you meant histories of *other* countries. I don't know of any comprehensive histories. Most of what I know is from quizzing foreigners (mostly scientists or students who have come to the US) that I meet.

Higher ed was traditionally this coordinate free philosophy of learning. It doesn't matter where you are, so long as you can synthesize higher order effects to move.

The practical hurdles to turning education into return on human capital investment are almost always the set of common-knowledge facts of an area.

For example, I could put together a quick design for the runs on a circuit board, but [until recently] I would have missed the fact that power[grid] supply lines, swing in the air, and that affects their inductance. I would have hosed a bulk distribution design.

I think of these as affinities [as in, things that are affine, or maybe things that cause ... to be affine] for a learning curve. For the smartest people, the scale of the affinities is small compared to the scale of what they can figure out, and so pure higher-ed is appropriate. For the less bright [durrr, me], the obstacles are relatively higher, and the four-year in-and-out, is just not good.

I was a total schmuck the first go-round [blew a full ride]. I was OK the second go round. I was better the third [master's] time. Each time was enhanced by the time off making affinity jumps. [I'd love to do some work for a phd, but I'm 34 with a wife, a kid, and another en route; I could probably write a substantial dissertation in a year, but guhh, who wants to take more TuTh 1-2:15 classes; I don't schedule my thinking like that.]

It seems like it would be hard to do to put together an omnibus system that gets out of the smart kids what they are capable of, while enabling the next 30% to get more out of themselves.

Plan II is good, but, if it doesn't relate to the students affinities, it is probably a waste.

It seems like it would be hard to do to put together an omnibus system that gets out of the smart kids what they are capable of, while enabling the next 30% to get more out of themselves.

Plan II is good, but, if it doesn't relate to the students affinities, it is probably a waste.

Plan II while I was there did exactly that, and it did it well. We were taught by some of the graduate schools' best profs, as well as in our dual major with our Plan II standalone degree (I punked out with an Honors English, but you could do anything -- Architecture, Dance, Slavic Languages, Electrical Engineer, Business...) Plan-II is an excellent pre-law and pre-med program as wel.

It's precisely because the Plan II students were essentially cherry-picked to have access to UT's most talented professor that they skew the results here somewhat. It's more or less skimming the cream of the crop off the other colleges to boost their numbers. Nice if you can get it. :)