Let The Bodies Pile High In Their Thousands (Boris Johnson) 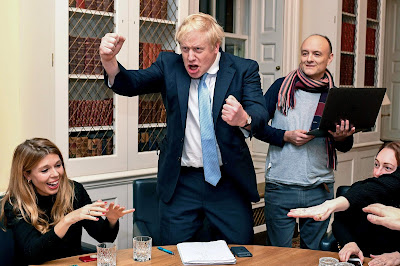 Recording a conversation in secret is not a criminal offence and is not prohibited. As long as the recording is for personal use you don’t need to obtain consent or let the other person know.

The security man in the foyer of No 10 Downing Street asks that you turn off your phone and deposit it in a wooden cubby shelf built into the wall. I sometimes wondered what the odds were that someone might walk out with my phone -- a disaster, obviously.
But it is not difficult to keep your phone as close attention is not paid. (Or, one could enter with more than one phone.) I'm not saying I have ever disobeyed the rules but I know that it is possible.
Of course the No 10 staffers all have their phones, which are necessary for their work throughout the day. Thus every meeting at the heart of British government is in danger of being surreptitiously but legally recorded.

Dominic Cummings 'has audio recordings of key government conversations' and 'can back up a lot of his claims', ally of the former chief adviser says.

Whitehall source said officials did not know extent of material Mr Cummings has.

Dominic Cummings kept audio recordings of key conversations in government, an ally claimed last night. The former chief adviser is locked in an explosive war of words with Boris Johnson after Downing Street accused him of a string of damaging leaks.

No 10 attempted to rubbish his claims on Friday night, saying it was not true that the Prime Minister had discussed ending a leak inquiry after a friend of his fiance Carrie Symonds was identified as the likely suspect. But an ally of Mr Cummings said the PM's former chief adviser had taken a treasure trove of material with him when he left Downing Street last year, including audio recordings of discussions with senior ministers and officials.

'Dom has stuff on tape,' the ally said. 'They are mad to pick a fight with him because he will be able to back up a lot of his claims.

Dom is an admirer of Bismarck. Never underestimate him.

Tories scramble to defend Johnson: Politics Weekly podcast (Guardian)
Note the media have no idea what is really going on, as usual.
Posted by Steve Hsu at 6:10 PM