If you have thought a lot about AI and deep learning you may find much of this familiar. Nevertheless I enjoyed the discussion. Apparently Chollet's views (below) are controversial in some AI/ML communities but I do not understand why.
Chollet's Abstraction and Reasoning Corpus (ARC) = Raven's Matrices for AIs :-)

...Francois has a clarity of thought that I've never seen in any other human being! He has extremely interesting views on intelligence as generalisation, abstraction and an information conversation ratio. He wrote on the measure of intelligence at the end of 2019 and it had a huge impact on my thinking. He thinks that NNs can only model continuous problems, which have a smooth learnable manifold and that many "type 2" problems which involve reasoning and/or planning are not suitable for NNs. He thinks that many problems have type 1 and type 2 enmeshed together. He thinks that the future of AI must include program synthesis to allow us to generalise broadly from a few examples, but the search could be guided by neural networks because the search space is interpolative to some extent.

This is Chollet's paper which is the focus of much of the discussion.

On the Measure of Intelligence

To make deliberate progress towards more intelligent and more human-like artificial systems, we need to be following an appropriate feedback signal: we need to be able to define and evaluate intelligence in a way that enables comparisons between two systems, as well as comparisons with humans. Over the past hundred years, there has been an abundance of attempts to define and measure intelligence, across both the fields of psychology and AI. We summarize and critically assess these definitions and evaluation approaches, while making apparent the two historical conceptions of intelligence that have implicitly guided them. We note that in practice, the contemporary AI community still gravitates towards benchmarking intelligence by comparing the skill exhibited by AIs and humans at specific tasks such as board games and video games. We argue that solely measuring skill at any given task falls short of measuring intelligence, because skill is heavily modulated by prior knowledge and experience: unlimited priors or unlimited training data allow experimenters to "buy" arbitrary levels of skills for a system, in a way that masks the system's own generalization power. We then articulate a new formal definition of intelligence based on Algorithmic Information Theory, describing intelligence as skill-acquisition efficiency and highlighting the concepts of scope, generalization difficulty, priors, and experience. Using this definition, we propose a set of guidelines for what a general AI benchmark should look like. Finally, we present a benchmark closely following these guidelines, the Abstraction and Reasoning Corpus (ARC), built upon an explicit set of priors designed to be as close as possible to innate human priors. We argue that ARC can be used to measure a human-like form of general fluid intelligence and that it enables fair general intelligence comparisons between AI systems and humans.

Notes on the paper by Robert Lange (TU-Berlin), including illustrations like the ones below. 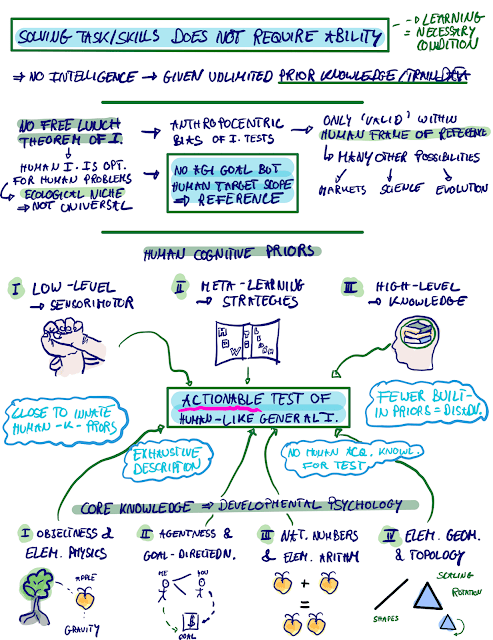 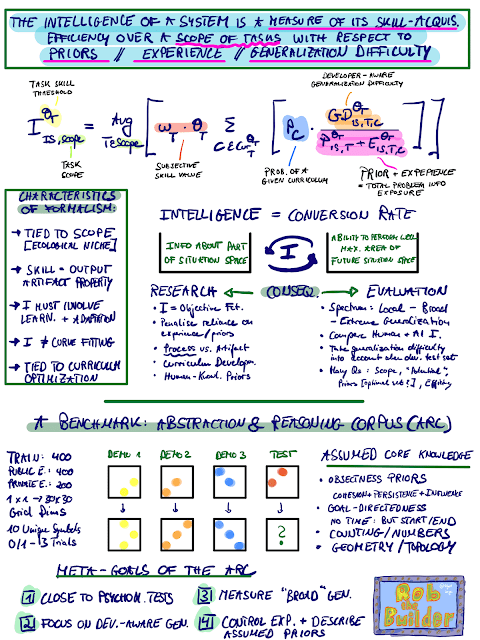